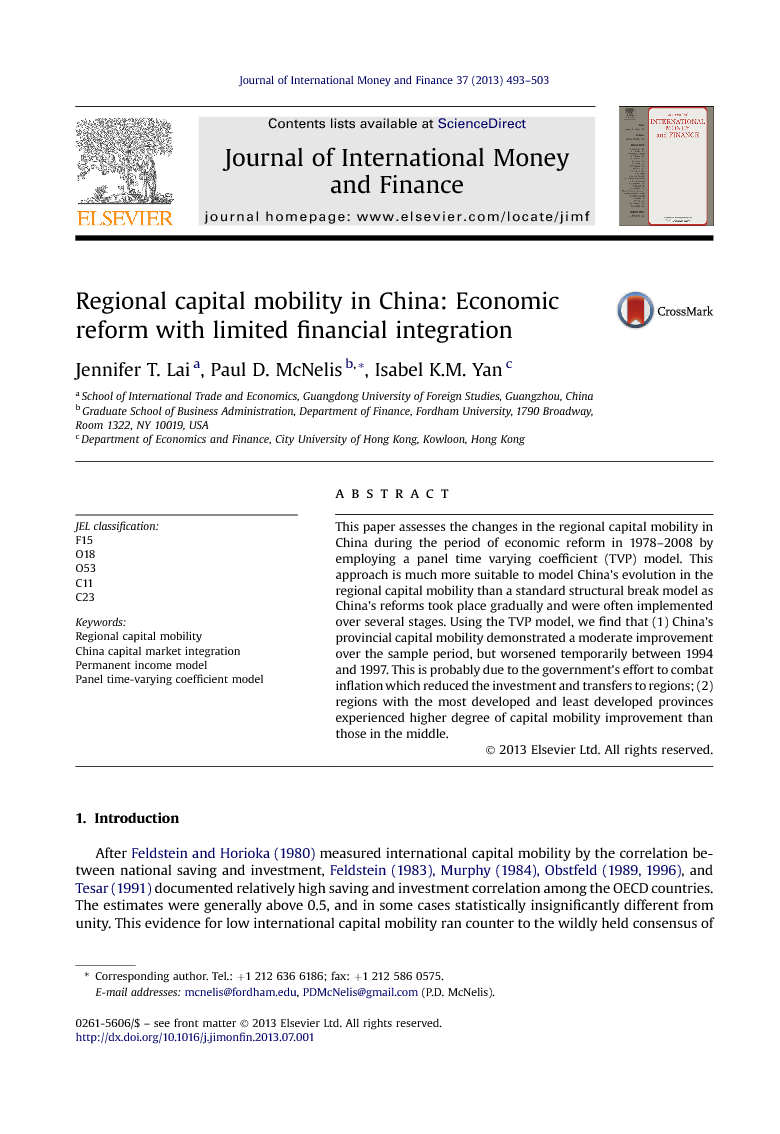 This paper assesses the changes in the regional capital mobility in China during the period of economic reform in 1978–2008 by employing a panel time varying coefficient (TVP) model. This approach is much more suitable to model China's evolution in the regional capital mobility than a standard structural break model as China's reforms took place gradually and were often implemented over several stages. Using the TVP model, we find that (1) China's provincial capital mobility demonstrated a moderate improvement over the sample period, but worsened temporarily between 1994 and 1997. This is probably due to the government's effort to combat inflation which reduced the investment and transfers to regions; (2) regions with the most developed and least developed provinces experienced higher degree of capital mobility improvement than those in the middle.

This paper examines the degree of capital mobility across different regions in China during 1978–2008 by utilizing the permanent income model developed by Campbell and Mankiw, 1990a and Campbell and Mankiw, 1990b. What is new in this paper is the use of an econometric technique that allows for different ”saving-retention” coefficients over time and across regions. Given that much has changed in China over time, this is a useful tool for assessing the process of financial integration in China. In our analysis, we abstracted from developments in economic geography and the related agglomeration literature in regional economics. In particular, Herrerias and Ordoñez (2012) have reported that provinces of different regions have converged into ”clubs”, based on measures of per-capital output, labor productivity and capital intensity. Their study notes considerable divergence in the underlying fundamentals for balanced economic growth in China. Their findings are consistent with our empirical results that document different degrees of financial integration across regions and time. The constant λ model yields positive and insignificant estimates of λ for the whole sample period and the two subperiods. However, when we employ a panel time-varying coefficients model, the results show that there is a slight improvement in the capital market integration across different regions in China. However, the two most developed regions, Beijing, Tianjin and Hebei as well as Shanghai, Jiangsu and Zhejiang show relatively large λ estimates, indicating that there was still some segregation between these developed regions and the other regions in China.