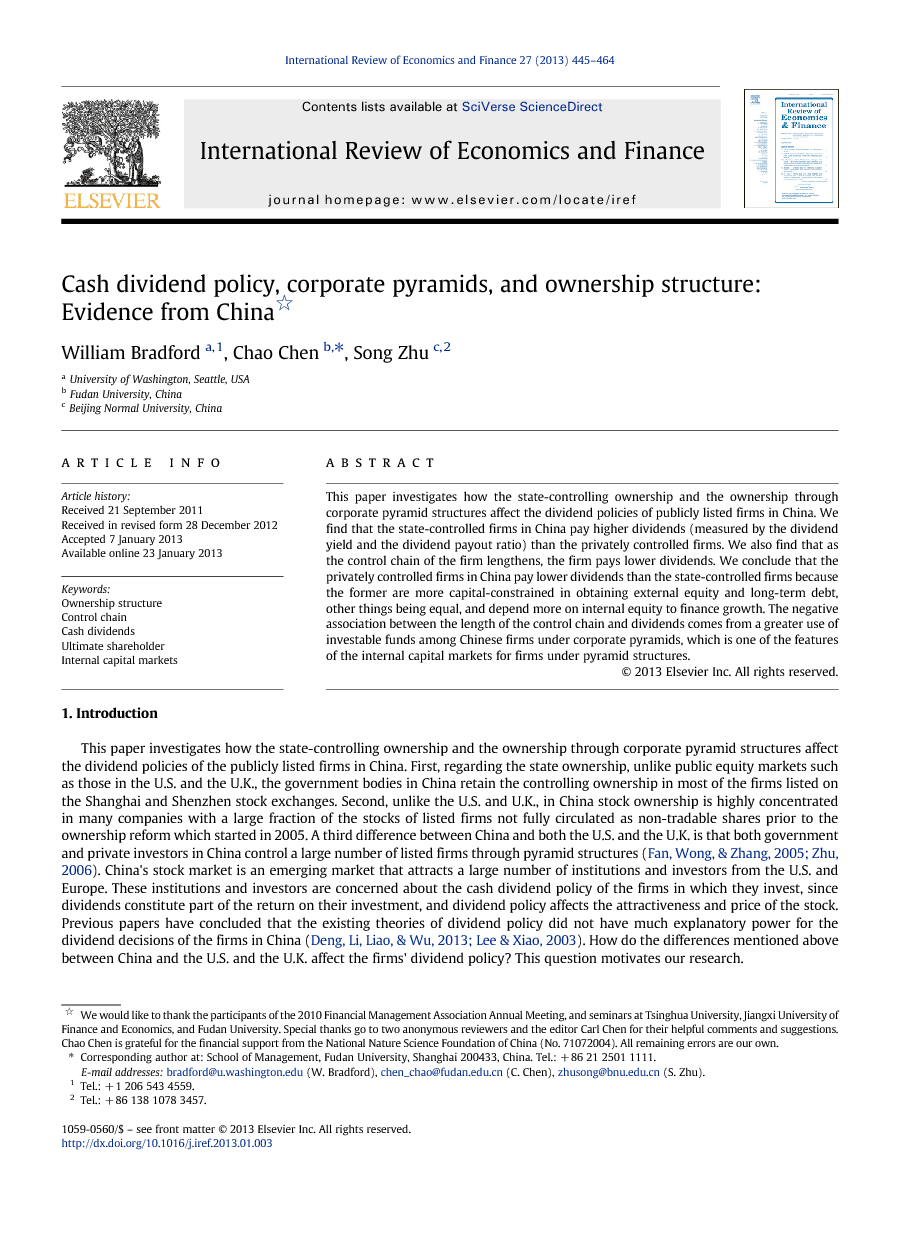 This paper investigates how the state-controlling ownership and the ownership through corporate pyramid structures affect the dividend policies of publicly listed firms in China. We find that the state-controlled firms in China pay higher dividends (measured by the dividend yield and the dividend payout ratio) than the privately controlled firms. We also find that as the control chain of the firm lengthens, the firm pays lower dividends. We conclude that the privately controlled firms in China pay lower dividends than the state-controlled firms because the former are more capital-constrained in obtaining external equity and long-term debt, other things being equal, and depend more on internal equity to finance growth. The negative association between the length of the control chain and dividends comes from a greater use of investable funds among Chinese firms under corporate pyramids, which is one of the features of the internal capital markets for firms under pyramid structures.

This paper investigates how the state-controlling ownership and the ownership through corporate pyramid structures affect the dividend policies of the publicly listed firms in China. First, regarding the state ownership, unlike public equity markets such as those in the U.S. and the U.K., the government bodies in China retain the controlling ownership in most of the firms listed on the Shanghai and Shenzhen stock exchanges. Second, unlike the U.S. and U.K., in China stock ownership is highly concentrated in many companies with a large fraction of the stocks of listed firms not fully circulated as non-tradable shares prior to the ownership reform which started in 2005. A third difference between China and both the U.S. and the U.K. is that both government and private investors in China control a large number of listed firms through pyramid structures (Fan et al., 2005 and Zhu, 2006). China's stock market is an emerging market that attracts a large number of institutions and investors from the U.S. and Europe. These institutions and investors are concerned about the cash dividend policy of the firms in which they invest, since dividends constitute part of the return on their investment, and dividend policy affects the attractiveness and price of the stock. Previous papers have concluded that the existing theories of dividend policy did not have much explanatory power for the dividend decisions of the firms in China (Deng et al., 2013 and Lee and Xiao, 2003). How do the differences mentioned above between China and the U.S. and the U.K. affect the firms' dividend policy? This question motivates our research. We test two hypotheses about the cash dividend policy in China. The capital constraint hypothesis concludes that state-owned enterprises (SOEs) pay more dividends than non-state-owned enterprises (NSOEs), because NSOEs are more capital-constrained, which affects the funds available to pay cash dividends. In China, NSOEs have more difficulty raising both equity and debt capital than SOEs. Debt financing is more difficult for NSOEs because the banks, which are historically state-controlled, are more biased toward lending to SOEs and public debt markets are almost nonexistent ( Brandt and Li, 2003 and Gul, 1999). Equity financing is more difficult for NSOEs because the government decides which firms issue shares, and SOEs are favored over NSOEs in the allocation of rights to issue new shares ( Green, 2003). Our tests show that consistent with the capital constraint hypothesis, SOEs pay more cash dividends than NSOEs. The second hypothesis, the internal capital market hypothesis, concerns whether longer control chains among Chinese listed companies affect the firms' payment of dividends. Longer control chains—i.e., corporate layers in the pyramid structure—can result in investable funds more fully utilized within firm pyramid groups, a well-known benefit of the internal capital markets for the firms in corporate pyramids ( Stein, 1997 and Williamson, 1985). If longer control chains enable a higher utilization of investable funds across the firms under the control chain, then longer control chains should be associated with lower surplus funds and fewer dividends. Consistent with the internal capital market hypothesis, we find that the length of the control chain is negatively related to the payment of cash dividends. Our results show that in China, the state ownership of listed firms has significant influence in predicting firms' dividend policies. Thus, we provide evidence of the change in the firms' dividend policies in socialistic economies when the state publicly controls the listed firms. We differ from Chen, Jian, and Xu (2009), and Lee and Xiao (2003), who viewed dividend payments among firms in China as a form of tunneling, particularly by the state-owned firms. We provide the evidence that is not consistent with the tunneling motive for issuing dividends. Our results also contribute to the empirical implications of the internal capital market theory. Most of the studies on pyramid ownership focus on firm performance or market value. This paper extends the topic on pyramid ownership to consider dividend policy, and examines the relationship in an emerging market context. The remainder of this paper is organized as follows. Section 2 reviews the literature related to the cash dividend policy and presents our hypotheses, and Section 3 reports data and samples. Empirical analyses and results are presented in Section 4. Section 5 concludes this paper.

We investigate the cash dividend policy of the firms in China along two dimensions: state versus non-state ownership, and ownership through pyramid structures. Unlike other public equity markets such as those in the U.S., the government bodies in China have significant ownership and control of a large fraction of China's publicly traded firms. The intra-government relationships make access to capital easier for SOEs than for NSOEs. China is emerging from an environment in which commercial banks, which have also been controlled by government bodies, have more readily provided debt capital to SOEs than to NSOEs. In addition, SOEs have greater access to the CSRC in obtaining permission to issue additional equity shares. These relationships potentially add a different element (compared with the cases of the U.S. and other Western countries) to the understanding of firms' dividend policies. Previous research on privatization in China has compared the performance of privatized firms (NSOEs) with that of the firms that remain SOEs (e.g., Wei and Varela, 2003 and Wei et al., 2003); but these studies have not considered the differences between these two sets of firms in dividend policies. We find that in China, SOEs pay more dividends than NSOEs, other things equal, because NSOEs have greater constraints on external equity and long-term debt financing. The financing constraints put more pressure on the internal equity of NSOEs to finance firm growth. Thus, while privatization is ongoing in China, China's financing infrastructure is still more favorable to SOEs, and one result of this is that SOEs pay more dividends than NSOEs. Another characteristic of China's listed firms is the ownership of listed firms through pyramid structures. Longer control chains can allow a greater use of the internal capital markets to reallocate funds across firms and units under corporate pyramids. We show that in China, the longer the control chain, the lower the level of cash dividends, measured by both the dividend payout ratio and the dividend yield. This finding reflects the utilization of the internal capital markets in firms under corporate pyramids. Our research indicates that in addition to accounting and financial measures, to understand dividend policies of the firms in China, one should also consider these firms' ownership structures. It is considered that the CSRC will continue to change its regulations concerning cash dividends required by the companies that seek to undertake rights offerings or SEOs. The timing and the degree to which Chinese firms change their dividend policies to adjust to the regulatory requirements are interesting and important issues. Further research is necessary to examine how these changes will be implemented by the firms that are publicly listed in China's stock markets.