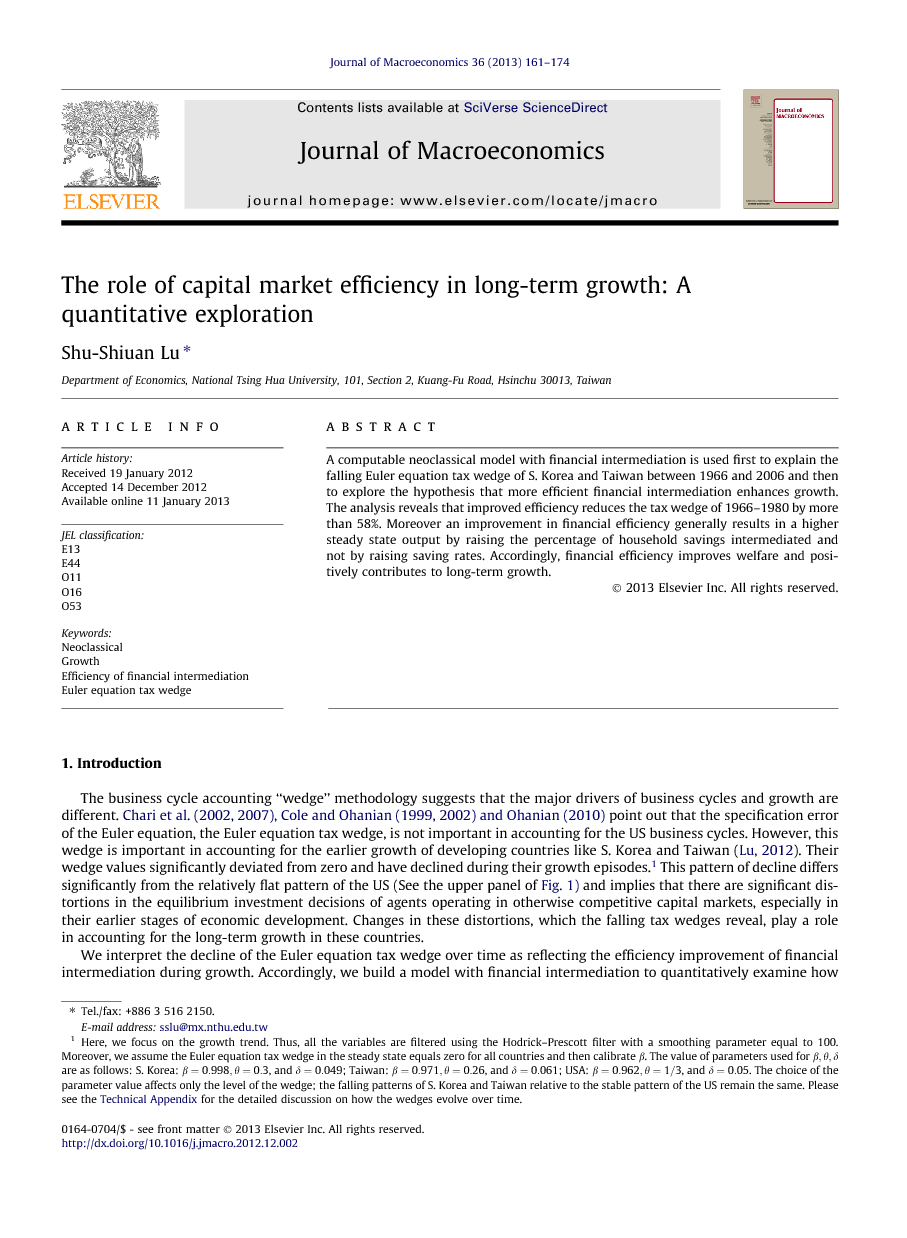 A computable neoclassical model with financial intermediation is used first to explain the falling Euler equation tax wedge of S. Korea and Taiwan between 1966 and 2006 and then to explore the hypothesis that more efficient financial intermediation enhances growth. The analysis reveals that improved efficiency reduces the tax wedge of 1966–1980 by more than 58%. Moreover an improvement in financial efficiency generally results in a higher steady state output by raising the percentage of household savings intermediated and not by raising saving rates. Accordingly, financial efficiency improves welfare and positively contributes to long-term growth.

We have introduced a banking sector into a prototypical Ramsey–Cass–Koopmans model to account for the observed evolution of the Euler equation tax wedge of S. Korea and Taiwan from 1966 to 2006. Our work shows that the model incorporating the efficiency changes of financial intermediation accounts for the reduction of the Euler equation tax wedge, especially that of 1966–1980. Moreover, we have also used the model to quantitatively evaluate the hypothesis that financial development—in the form of bank efficiency improvement—positively contributes to economic growth. The model results suggest that this efficiency improvement positively contributes to per capita output growth. Although the size of the contribution changes quantitatively when assuming different degrees of substitutability between firm-owned assets and loans, when considering misallocation issues or the possibility of firm entry and exit, we show that qualitatively, the positive contribution of bank efficiency to output growth holds in general. We also find that the efficiency improvement positively contributes to growth by raising the proportion of household savings being transformed into loans rather than by raising saving rates. Finally, we find that bank efficiency improvement is welfare enhancing. The main finding that bank efficiency improvement contributes to growth coincides with the well-known empirical evidence in the development literature regarding the positive impact of financial development on growth. This paper also supports the view that capital market efficiency positively affects growth through the efficient mobilization of funds from savers to firms rather than by altering the saving rate. A natural next step is to study the elasticity of substitution between firm-owned assets and loans from a macroeconomic perspective since the degree to which bank efficiency affects growth is sensitive to this parameter. Once the elasticity of substitution for the firms’ financing is estimated, the importance of financial development to growth can be accurately assessed. Then, we can provide better policy recommendations to the developing world regarding financial development. Finally, our work suggests that one can build a more sophisticated model that takes into account more functions of banks, such as the project monitoring function shown in Greenwood et al., 2010 and Greenwood et al., 2012, and endogenizes the evolution of TFP to address the issue of finance and growth. We leave all these interesting topics for future research.