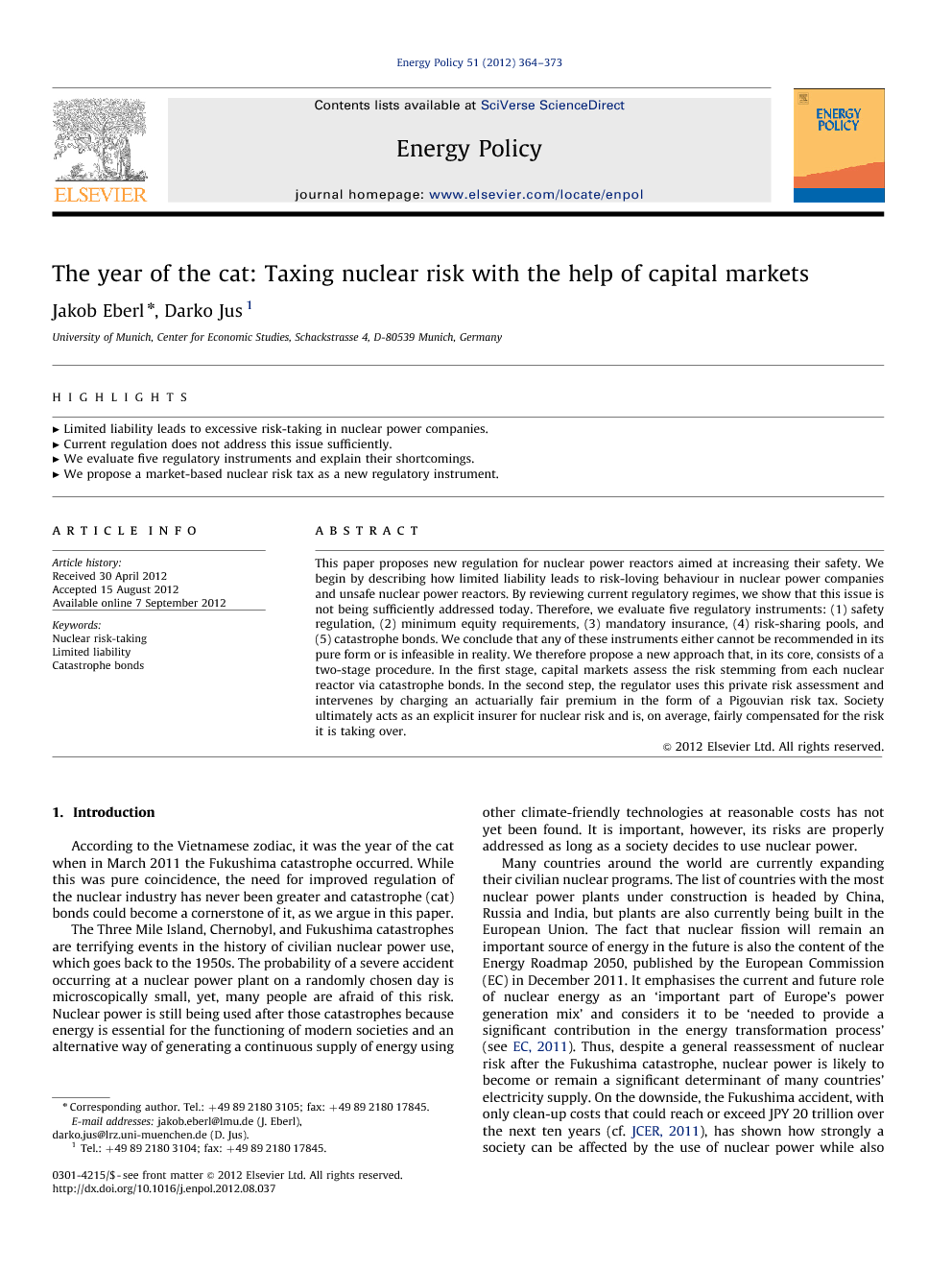 This paper proposes new regulation for nuclear power reactors aimed at increasing their safety. We begin by describing how limited liability leads to risk-loving behaviour in nuclear power companies and unsafe nuclear power reactors. By reviewing current regulatory regimes, we show that this issue is not being sufficiently addressed today. Therefore, we evaluate five regulatory instruments: (1) safety regulation, (2) minimum equity requirements, (3) mandatory insurance, (4) risk-sharing pools, and (5) catastrophe bonds. We conclude that any of these instruments either cannot be recommended in its pure form or is infeasible in reality. We therefore propose a new approach that, in its core, consists of a two-stage procedure. In the first stage, capital markets assess the risk stemming from each nuclear reactor via catastrophe bonds. In the second step, the regulator uses this private risk assessment and intervenes by charging an actuarially fair premium in the form of a Pigouvian risk tax. Society ultimately acts as an explicit insurer for nuclear risk and is, on average, fairly compensated for the risk it is taking over.

According to the Vietnamese zodiac, it was the year of the cat when in March 2011 the Fukushima catastrophe occurred. While this was pure coincidence, the need for improved regulation of the nuclear industry has never been greater and catastrophe (cat) bonds could become a cornerstone of it, as we argue in this paper. The Three Mile Island, Chernobyl, and Fukushima catastrophes are terrifying events in the history of civilian nuclear power use, which goes back to the 1950s. The probability of a severe accident occurring at a nuclear power plant on a randomly chosen day is microscopically small, yet, many people are afraid of this risk. Nuclear power is still being used after those catastrophes because energy is essential for the functioning of modern societies and an alternative way of generating a continuous supply of energy using other climate-friendly technologies at reasonable costs has not yet been found. It is important, however, its risks are properly addressed as long as a society decides to use nuclear power. Many countries around the world are currently expanding their civilian nuclear programs. The list of countries with the most nuclear power plants under construction is headed by China, Russia and India, but plants are also currently being built in the European Union. The fact that nuclear fission will remain an important source of energy in the future is also the content of the Energy Roadmap 2050, published by the European Commission (EC) in December 2011. It emphasises the current and future role of nuclear energy as an ‘important part of Europe’s power generation mix’ and considers it to be ‘needed to provide a significant contribution in the energy transformation process’ (see EC, 2011). Thus, despite a general reassessment of nuclear risk after the Fukushima catastrophe, nuclear power is likely to become or remain a significant determinant of many countries’ electricity supply. On the downside, the Fukushima accident, with only clean-up costs that could reach or exceed JPY 20 trillion over the next ten years (cf. JCER, 2011), has shown how strongly a society can be affected by the use of nuclear power while also sensitising people to the reality that many nuclear reactors may be carrying a substantial risk. We argue in this paper that the problem at heart is the existence of de facto (through the amount of equity capital) or de jure (by law) limited liability of nuclear power companies (NPCs). The basic mechanism is the fact that an NPC cannot lose more than the legally defined liability capital or, in the worst case, its equity capital, even if the damage of a nuclear accident is much higher. This reduces the incentive to invest in costly nuclear safety and leads to an inefficient safety level in nuclear reactors. For example, the Tokyo Electric Power Company (TEPCO) reported equity capital in the amount of JPY 2.47 trillion for 2010 (see TEPCO, 2011). This does not seem small at first glance; however, this amount only constitutes a small proportion of the actual costs of the Fukushima catastrophe, the remainder of which cannot be borne by TEPCO and must therefore eventually be absorbed by Japanese society. Similarly, the liability of other NPCs around the world is, in the case of catastrophic accidents, limited de jure or de facto (see Table 1 for a brief overview and Section 3 for a more detailed discussion).

Currently, NPCs enjoy limited liability with respect to potential catastrophic nuclear accidents. This has been seen as necessary to protect NPCs from ruinous claims and was essential for the development of this industry, but it may nowadays be re-interpreted as a major source of excessively risky nuclear reactors. As the number of nuclear reactors worldwide is expected to rise over the next decades, it is all the more important to discuss ways in which the use of nuclear power can be made safer. Therefore, we have evaluated several known instruments and concluded that any of these instruments either cannot be recommended in its pure form or is infeasible in reality. We have thus proposed a new regulatory approach, based on the general idea of catastrophe bonds that may be superior to the other instruments. The core of our proposal consists of a two-stage procedure: in the first stage, capital markets evaluate the risk stemming from each nuclear reactor via catastrophe bonds issued on a smaller scale than actually required to cover the potential losses, but whose value can be used as an indicator for the riskiness of a reactor. In the second stage, the regulator uses this private risk assessment and intervenes by charging an actuarially fair premium, a Pigouvian nuclear risk tax that, if conditions were ideal, would induce the optimal level of risk-taking. Society then acts as an explicit insurer for nuclear risk and is, on average, fairly compensated for the risk it is taking over. The implementation of such a scheme would make the use of nuclear power (privately) more expensive, since the risk of accidents would now also be priced. Consequently, some nuclear reactors (in particular the unsafe ones) may become unprofitable and could disappear from the market. The other ones that remain privately profitable are then also socially profitable according to the monetary risk that they impose on society. Neither the ethical nor the moral arguments against nuclear power have been considered at this stage; even after the optimal level of risk-taking is implemented, society may decide not to use nuclear power. This decision must not be taken on the basis of nuclear power plants that are too risky, however, but given that the level of care satisfies allocative efficiency. Therefore, solving the problem of limited liability and excessive risk-taking is both an important element of the future use of nuclear power and a necessary basis for decisions regarding nuclear phase-outs.