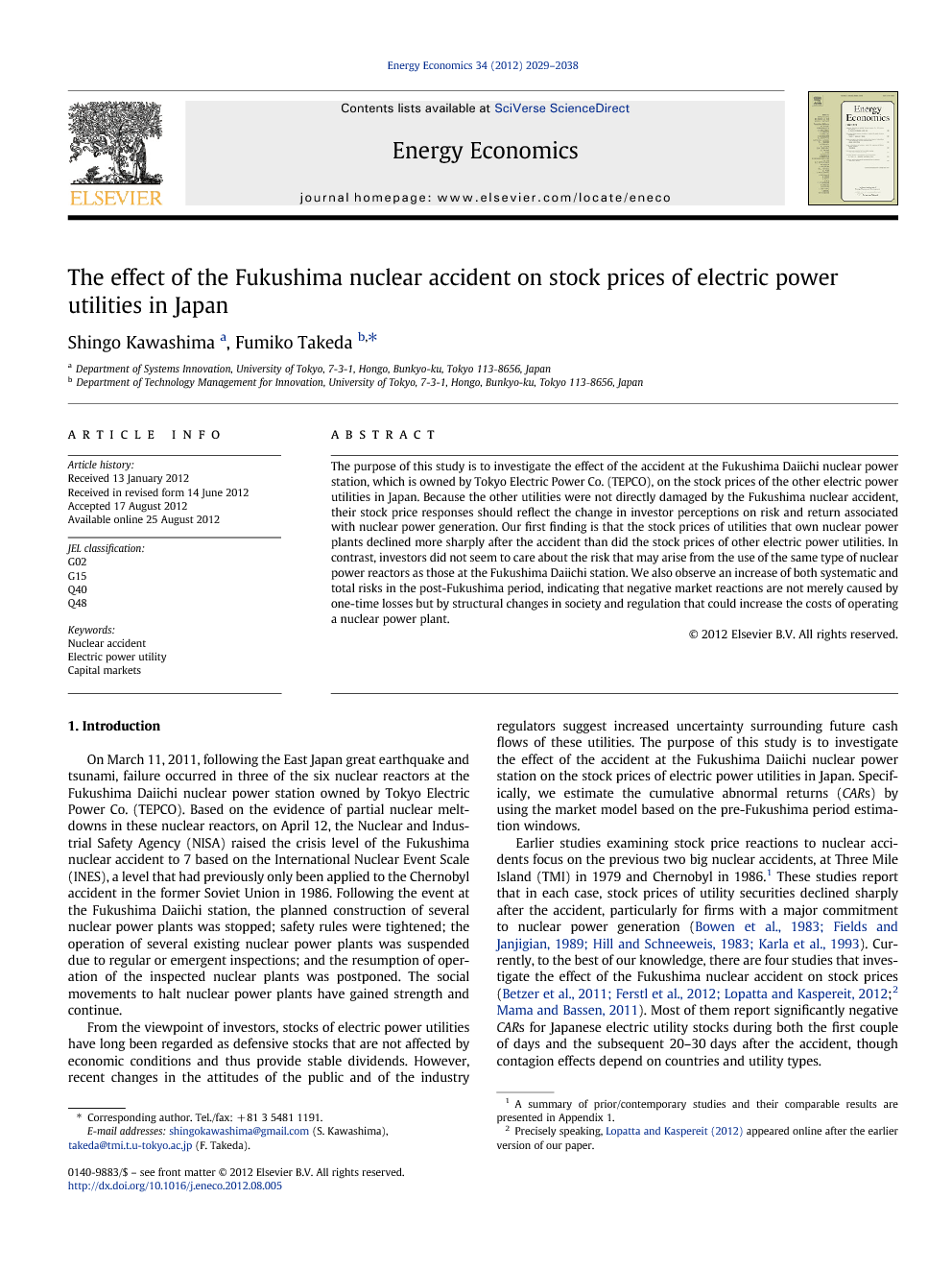 The purpose of this study is to investigate the effect of the accident at the Fukushima Daiichi nuclear power station, which is owned by Tokyo Electric Power Co. (TEPCO), on the stock prices of the other electric power utilities in Japan. Because the other utilities were not directly damaged by the Fukushima nuclear accident, their stock price responses should reflect the change in investor perceptions on risk and return associated with nuclear power generation. Our first finding is that the stock prices of utilities that own nuclear power plants declined more sharply after the accident than did the stock prices of other electric power utilities. In contrast, investors did not seem to care about the risk that may arise from the use of the same type of nuclear power reactors as those at the Fukushima Daiichi station. We also observe an increase of both systematic and total risks in the post-Fukushima period, indicating that negative market reactions are not merely caused by one-time losses but by structural changes in society and regulation that could increase the costs of operating a nuclear power plant.

In this paper we investigate the effect of the accident at the Fukushima Daiichi nuclear power station, which is owned by TEPCO, on stock prices of the other electric power utilities in Japan. We report the following findings. First, stock prices of the firm hit by the earthquake declined more sharply than did those of the other firms. Second, stock prices of the firms that own nuclear power plants declined more sharply than did those of firms without nuclear power plants. In contrast, shareholders of firms did not seem to care about whether electric power utilities own nuclear power reactors similar to those at the Fukushima Daiichi. This third result is different from a prior study examining the impact of TMI. These results indicate that investors expected that the recent changes in the attitudes of the public and of the regulation would increase the costs of power generation, suggesting the reduction of future cash flow of the firms dependent on nuclear power generation. However, investors were less sensitive to potential risks that might cause another disastrous accident by using nuclear power reactors similar to those at the Fukushima Daiichi power station. To determine whether the market reactions were structurally changed after the Fukushima accident, we examine the stability of the parameters of the market model before and after the accident. We observe that the absolute value of beta and variances increased after the accident, indicating the increase of both systematic and total risks in the post-accident period. The shift in the parameters also suggests that negative CARs are not merely caused by one-time losses but by structural changes in society and the regulation that could increase the costs of power generation even after the compensation scheme was approved. We then conduct breakpoint Chow tests, which provide evidence of structural changes in the relationship between stock returns of nine electric power utilities and those of TOPIX. The exception is OEPC, which does not own a nuclear power plant. We confirm that our results are robust in the sense that they are not sensitive to specific estimation windows. Although we acknowledge that the small number of listed electric power utilities in Japan may have limited our ability to assess the stability of the market model to some extent, we believe that our study is of interest not only to researchers but also to investors and regulators of electric power utilities.