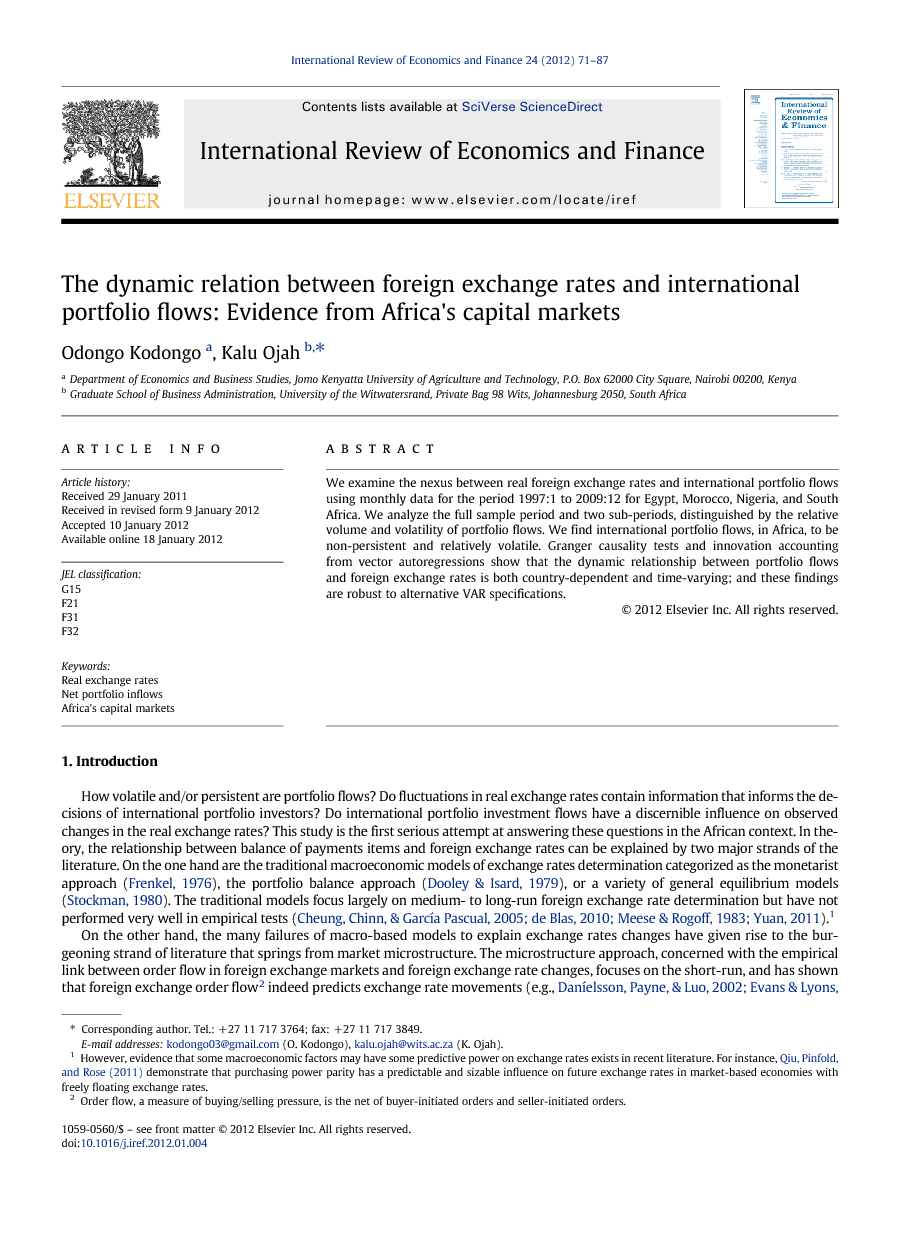 We examine the nexus between real foreign exchange rates and international portfolio flows using monthly data for the period 1997:1 to 2009:12 for Egypt, Morocco, Nigeria, and South Africa. We analyze the full sample period and two sub-periods, distinguished by the relative volume and volatility of portfolio flows. We find international portfolio flows, in Africa, to be non-persistent and relatively volatile. Granger causality tests and innovation accounting from vector autoregressions show that the dynamic relationship between portfolio flows and foreign exchange rates is both country-dependent and time-varying; and these findings are robust to alternative VAR specifications.

We investigated the dynamic relationship between real exchange rates and net portfolio inflows of four major countries in Africa. The results suggest that international portfolio flows to African countries are characterized by high volatility and low persistence. Overall, our results do not indicate a direction of causality between real exchange rates and net portfolio inflows that can be generalized across all the countries investigated. Rather, causality between the two macroeconomic variables appears to be both country-specific and time-varying. These results are consistent with Morrissey, Lloyd, and Opoku-Afari (2004), who find that neither “permanent” (foreign direct investments, remittances, grants) nor “non-permanent” (loans, portfolio investments) capital inflows have a short-run effect on the real exchange rate in Ghana. Our results also mirror Ndung'u and Ngugi (1999), who find only a weak feedback from real exchange rate movements to Kenya's capital flows volatility. The country-specific nature of the documented relationship may be attributed to idiosyncrasies around attractiveness of the specific capital markets to foreign investors, as explained by their perceived openness to international capital flows and financial markets sophistication. Thus, the South African capital market, which exhibits the highest level of sophistication of the markets investigated,10 is more likely to command greater awareness of foreign investors than the other markets. As such, the decisions of international portfolio investors in South Africa's financial markets are likely to be informed by changes in macroeconomic fundamentals including fluctuations in foreign exchange rates. Similarly, because of her relatively more flexible foreign exchange regime, South Africa's exchange rate fluctuations may draw more closely from the flow of international money. This may explain the bidirectional causality finding for South Africa for the full sample period. Next, it is important to point out that the order flow in the foreign exchange market depends both on the financial account and on the current account of the balance of payments. As Müller-Plantenberg (2010) explains, the balance of payments consists primarily of the current account and the financial account, with the latter composed of monetary flows and non-monetary flows such as portfolio flows, foreign direct investment, bank lending and other investments. Given that capital flows, and in particular portfolio flows, are far more volatile, in general, than the current account, it is natural to expect significant correlations between portfolio flows and exchange rate movements. However, in the medium-term or longer-term horizons, whether the exchange rate moves in one way or the other depends crucially on whether net trade flows outweigh net capital flows or vice versa. That is, there is the likelihood that the relative persistent dominance of the current account (i.e., current account surplus/deficit) might counter or even trump the portfolio flow effects. Thus the asymmetries between balance of payments items may explain the relatively weak evidence of causality in our findings. Finally, expectations may also play a role. For example, if, for some reasons, portfolio inflows are expected to rise at some future date, the exchange rate would have to rise now rather than in the future; otherwise, investors could make relatively riskless profits by buying the domestic currency now and waiting for it to appreciate. Given their non-persistence and high volatility, it is relatively difficult, in general, to predict future portfolio flows; with the possibility of anticipated exchange rate changes coming into the mix of things, it is even more difficult to reach conclusions about the empirical causal nexus between the two variables.