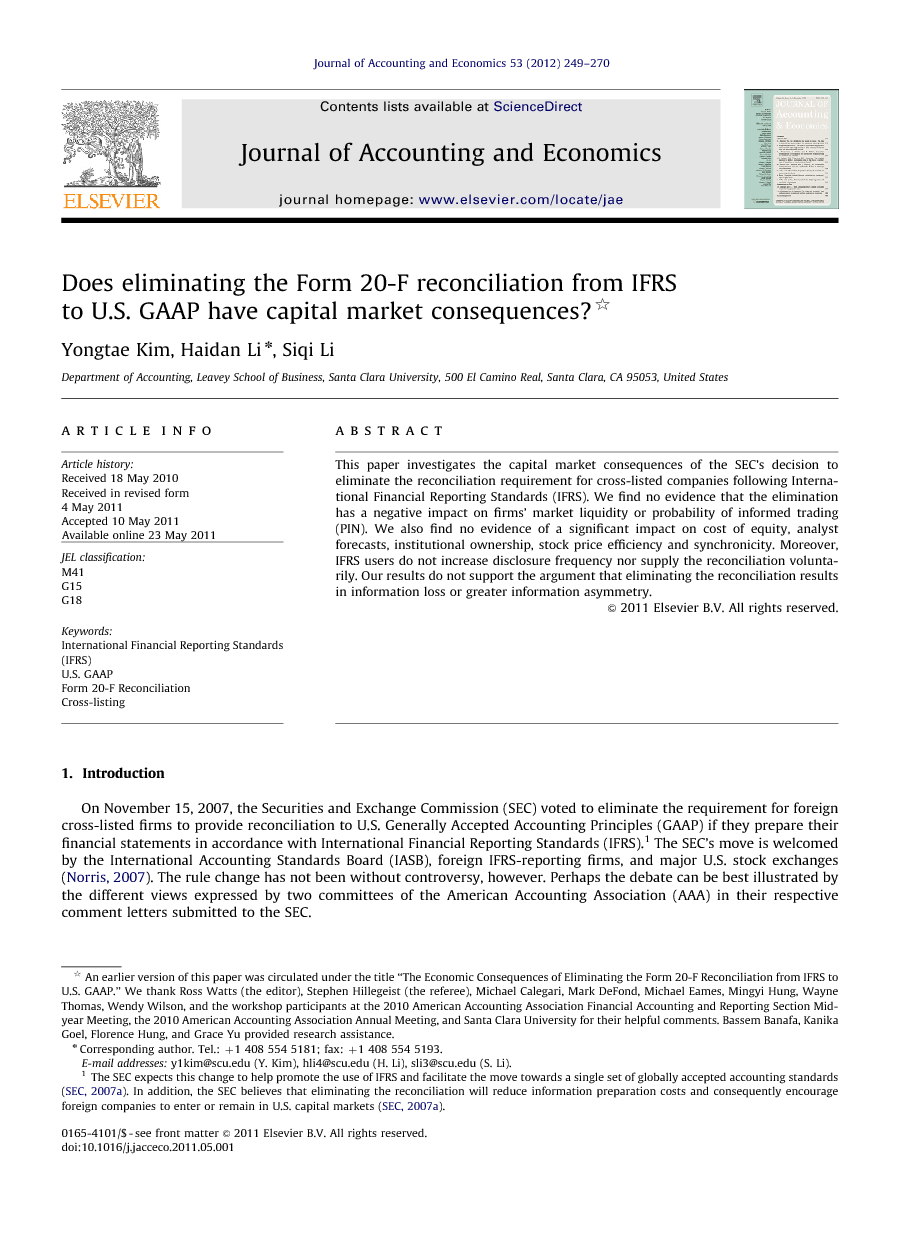 This paper investigates the capital market consequences of the SEC's decision to eliminate the reconciliation requirement for cross-listed companies following International Financial Reporting Standards (IFRS). We find no evidence that the elimination has a negative impact on firms' market liquidity or probability of informed trading (PIN). We also find no evidence of a significant impact on cost of equity, analyst forecasts, institutional ownership, stock price efficiency and synchronicity. Moreover, IFRS users do not increase disclosure frequency nor supply the reconciliation voluntarily. Our results do not support the argument that eliminating the reconciliation results in information loss or greater information asymmetry.

This study examines the capital market effects of the SEC's recent rule change to eliminate the 20-F reconciliation requirement for U.S. cross-listed firms following IFRS. Specifically, we investigate the effects of the elimination on stock market liquidity and the probability of informed trading (PIN). We find no evidence that IFRS-reporting firms experience a significant change in market liquidity (as measured by zero returns, price impact, bid-ask spread, and trading costs) and PIN in the year after the elimination, relative to a control group of cross-listed firms that do not use IFRS. We explore other potential consequences of eliminating the 20-F reconciliation and find no evidence that the elimination has a significant impact on cost of equity, analysts' forecast error, bias and dispersion, institutional ownership, and stock price efficiency and synchronicity. While our main analysis focuses on the capital market consequences of eliminating the reconciliation requirement, we also provide evidence on firms' responses to the elimination. We find that none of the IFRS users continue to provide the reconciliation in Form 20-Fs voluntarily after the elimination. Moreover, we compare the number of press releases before and after the elimination and find that IFRS firms do not increase their disclosure frequency after the elimination. To address the concern on whether our tests have sufficient statistical power given the relatively small sample size, we conduct power analysis and find that our regressions do not suffer from significant Type II errors. In addition, finding results that are consistent across different measures and robust to different model specifications increases the confidence that our results are not caused by variable mis-measurement or model mis-specifiatoin. Specifically, we find consistent results across four different measures of liquidity and PIN along with PIN parameters. Additional analyses of more than 10 measures of other capital market consequences also yield consistent results. To ensure a correct model specification, we employ a difference-in-differences design, using cross-listed non-IFRS-reporting firms to control for contemporaneous changes in capital markets that may coincide with the SEC's decision to end the reconciliation requirement. Our results are robust to alternative control samples. We also include an extensive list of control variables in our regression models to mitigate the concern of the correlated omitted variables problem. Taken together, we find no evidence that eliminating the IFRS to U.S. GAAP reconciliation has a negative capital market impact on IFRS-reporting cross-listed firms. The findings of our paper will be of interest to accounting and security regulators. Our results are inconsistent with the argument that the SEC's decision to end the reconciliation requirement results in information loss or greater information asymmetry. Our results suggest that U.S. investors do not perceive cross-listed firms' accounting information based on IFRS to be of inferior quality relative to that based on U.S. GAAP, either because they view the two sets of standards to have similar quality, or because they believe that, holding firms' reporting incentives constant, differences between IFRS and U.S. GAAP have a minimal impact on the quality of accounting information. Current and potential U.S. cross-listed firms will also find our evidence useful in their analysis of the costs and benefits of listing their securities in the U.S. capital markets.