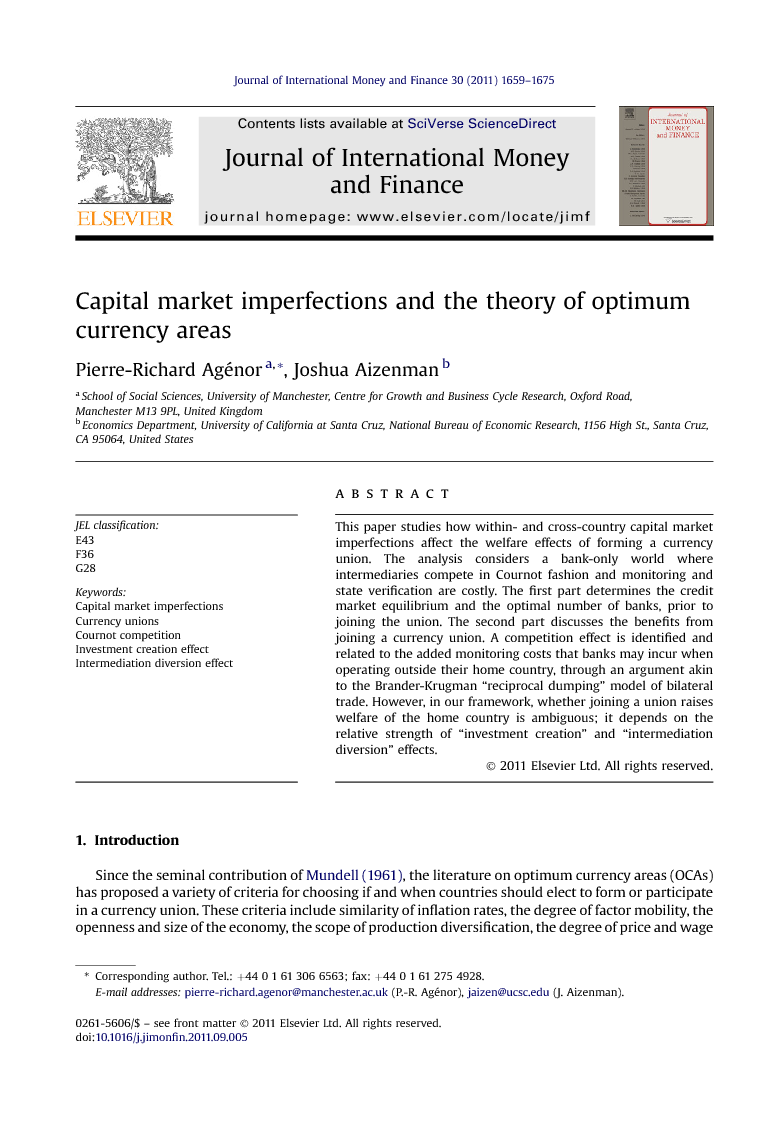 This paper studies how within- and cross-country capital market imperfections affect the welfare effects of forming a currency union. The analysis considers a bank-only world where intermediaries compete in Cournot fashion and monitoring and state verification are costly. The first part determines the credit market equilibrium and the optimal number of banks, prior to joining the union. The second part discusses the benefits from joining a currency union. A competition effect is identified and related to the added monitoring costs that banks may incur when operating outside their home country, through an argument akin to the Brander-Krugman “reciprocal dumping” model of bilateral trade. However, in our framework, whether joining a union raises welfare of the home country is ambiguous; it depends on the relative strength of “investment creation” and “intermediation diversion” effects.

Since the seminal contribution of Mundell (1961), the literature on optimum currency areas (OCAs) has proposed a variety of criteria for choosing if and when countries should elect to form or participate in a currency union. These criteria include similarity of inflation rates, the degree of factor mobility, the openness and size of the economy, the scope of production diversification, the degree of price and wage flexibility, the extent of integration in goods markets, the correlation between economic shocks across countries, the degree of fiscal integration, and the political will to integrate.1 Although much of the early literature on OCAs took these optimality criteria as given, recent research has emphasized that some of them may be endogenous, as a result of the very existence, and induced effects, of a currency union. It has been argued that similarity of inflation rates, for instance, may be promoted by participating in a currency union, and that a high degree of convergence (or low dispersion) should not necessarily be viewed as a pre-condition for forming one.2 Similarly, entry into a currency union may strengthen international trade linkages over time.3 By contrast, the present paper focuses instead on how within- and cross-country capital market imperfections may condition the welfare gains of joining a currency union. Somewhat surprisingly, there has been very little analytical research on this issue; most of the literature surveys referred to earlier do not even mention it as a relevant criterion for assessing the net benefits that countries might derive from forming or participating in a union.4 This paper is an attempt to fill this gap, using a simple stochastic model where financial intermediation services are provided only by banks. Our focus is on understanding how monitoring costs, and the degree of competition in banking, affect the welfare gains associated with (and thus the desirability of participating in) a currency union. A key step in doing so is a comparison between expected surpluses before and after joining the union. As a result, we are able to identify the reasons why the welfare effect of this decision is ambiguous. The remainder of the paper is organized as follows. Section 2 provides a brief review of the current literature on capital market imperfections and OCAs.5 Section 3 presents the model and describes the functioning of the financial sector prior to joining a union. The model upon which our analysis is based extends the framework developed in Agénor and Aizenman, 1998, Agénor and Aizenman, 1999 and Agénor and Aizenman, 2005, which itself dwells on the costly state verification approach pioneered by Townsend (1979). However, in an important departure from these previous studies, we also endogenize the number of financial intermediaries. Section 4 considers the case where the country under consideration joins a currency union, and analyzes a key channel through which financial factors may affect the welfare gains (calculated from the point of view of an individual member country) from joining the union: an enhanced bank competition effect. We draw an important analogy between the added monitoring costs that banks may incur when operating outside their home country, and transportation costs, in a manner similar to the “reciprocal dumping” model of Brander and Krugman (1983). However, we also show that our results differ in important ways from that paper, in the sense that welfare effects are now ambiguous. Section 5 further discusses some of the assumptions underlying our analysis, the distinction between financial integration and the financial effects of joining a currency union, and considers some possible extensions. Section 6 summarizes our main results and offers some concluding remarks.

This paper examined the role of capital market imperfections in assessing the welfare effects of forming a currency union—a topic that has received surprisingly little attention among researchers. Following a brief review of the literature, we presented an analytical framework that we believe is a useful starting point for addressing some of the core issues involved. Our model considers a bank-only world where monitoring and state verification are costly and banks compete in Cournot fashion. The first part of the paper determined the credit market equilibrium and the optimal number of banks, prior to joining the union. The second part identified a key channel through which financial factors may affect the welfare gains that each country may derive from joining a currency union, characterized by the elimination of foreign exchange risk, the complete liberalization of capital movements, and the removal of restrictions on the operation of foreign banks in each economy. Upon the formation of the union, foreign banks have access to the domestic capital market and may lend to domestic firms; there is therefore enhanced bank competition. We drew an important parallel between the added monitoring costs that banks may incur when operating outside their home country and trade-related transportation costs, and derived a “reciprocal lending” equilibrium akin to the “reciprocal dumping” equilibrium derived by Brander and Krugman (1983) in their seminal model of trade under a Cournot duopoly. However, our analysis differs from the Brander-Krugman trade model because welfare effects are now ambiguous. In particular, our analysis showed that joining a currency union brings a welfare gain to a country only if the cost disadvantage that banks face when operating outside their own local market is sufficiently small. Empirical evidence on the relative importance of the investment creation and investment diversion effects identified in our analysis, perhaps focusing on a particular country or episode, would be useful. In addition, as noted in the previous section, there are a number of ways in which our formal analysis can be extended. However, many of these extensions would not alter the main thrust of our analysis, which is that, in the presence of credit market imperfections, there are a number of effects, operating through the financial system, that are associated with joining a currency union; the net impact of these different effects on aggregate welfare of each individual country is in general ambiguous. Whether the competition effect generates a welfare gain depends on how strong the “investment creation” effect is relative to the “intermediation diversion” effect.20 By implication, incentives to participate in a currency union will differ across countries, depending on their degree of financial development. The benefits, from the perspective of a single country, of forming a currency union with another are not necessarily symmetric across countries. Those with more efficient financial systems have more to gain—as long as the cost that their banks must incur to access foreign markets are not excessive. At a more practical level, our model suggests also that the deeper financial integration of European countries promoted by the formation of the Euro area set in motion powerful competition effects due to reciprocal lending by banks that used to operate domestically, shielded from foreign competition. The competition effect is stronger the lower is the cost disadvantage of banks operating in foreign markets, and the weaker was competition in the domestic market prior to the union. For a low enough cost disadvantage of foreign banks, the formation of the union would be welfare improving. The competition effect tends to induce the exit of marginal banks. It may also lead to banking consolidation, in an attempt to exploit scale economies and to reduce the exposure to risk by means of geographical diversification. These results are in line with the empirical evaluation of Méon and Weill (2005) who, using data for all EU countries for the period 1960–95, found the existence of potential gains from inter-country pair mergers that would provide a better hedge against macroeconomic risk.21 In fact, and in relation to the ongoing sovereign debt crisis in Europe, it is possible that there has been an overexpansion of financial intermediation across borders if banks entered markets with underinvestment in monitoring. Such underinvestment may have resulted from a moral hazard problem associated with the belief that German or French taxpayers would bail out their most active banks at the level of the union in case of a bad macro shock. This issue, which can be addressed with an extension of our model, is left for future research.