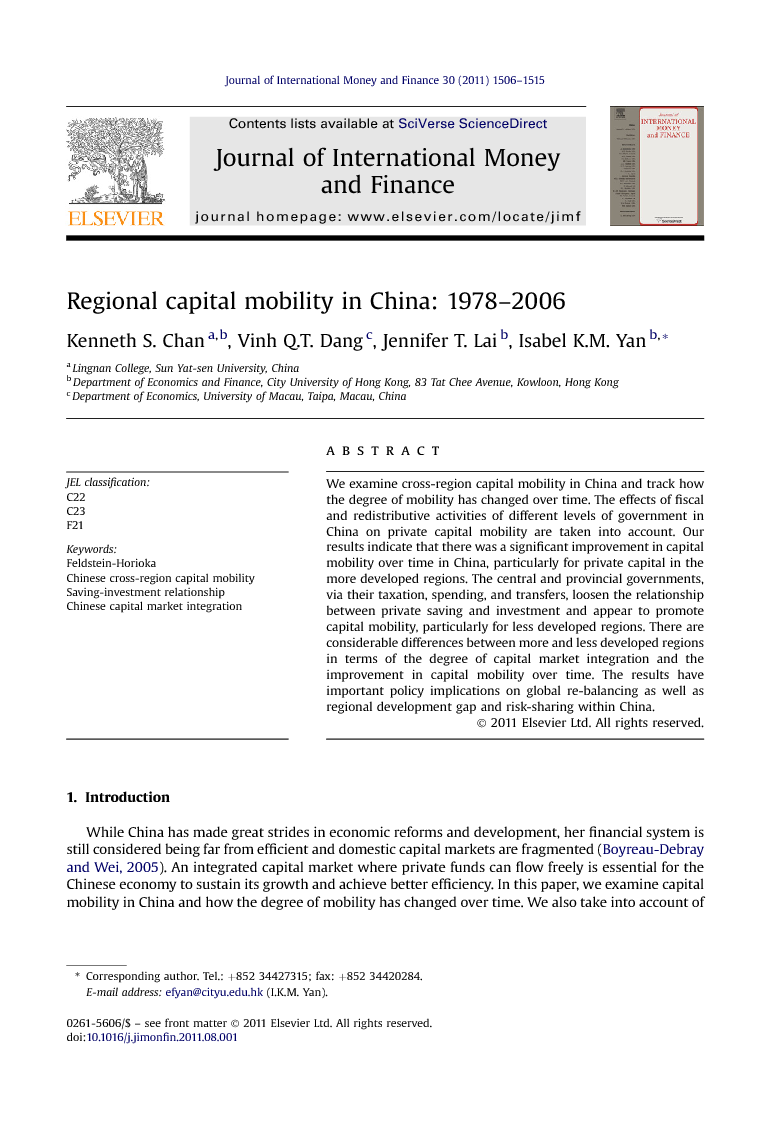 While China has made great strides in economic reforms and development, her financial system is still considered being far from efficient and domestic capital markets are fragmented (Boyreau-Debray and Wei, 2005). An integrated capital market where private funds can flow freely is essential for the Chinese economy to sustain its growth and achieve better efficiency. In this paper, we examine capital mobility in China and how the degree of mobility has changed over time. We also take into account of the effects of fiscal and redistributive activities of different levels of government in China on cross-region capital mobility.1 After 1978, economic reforms experimented along the coastal areas such as Guangdong and Shanghai have resulted in rapid development in these regions. They have become the engine of economic growth for the whole country. However, this might have contributed to a widening economic development gap between these coastal and the more inland regions. The Chinese central government in 2000 initiated a “Develop the West” program to promote a more balanced growth across China (Lin and Liu, 2008). At the same time, China is under increasing pressure from her major trading partners to rely less on foreign demand in an effort to curb global imbalances. The 2007–2009 global financial crisis gives rise to yet another incentive for China to turn more to domestic demand as a propeller of growth. Furthermore, the composition of the domestic absorption matters a great deal here. Prasad (2009) shows that the economic growth of China has been driven mainly by investment rather than by consumption. Greater capital mobility would enhance the ability of households to borrow for consumption of both home and foreign goods. Higher consumption spending would then generate a more sustainable growth driven by domestic demand in China and contribute toward global re-balancing. Xu (2008) finds evidence of low degree of consumption risk sharing across Chinese provinces; he suggests that one should focus on the mechanisms that have prevented regions from sharing their risks within China. Increased capital mobility is essential for more active cross-region borrowing and lending that would in turn facilitate risk sharing and confer corresponding welfare gains. In short, understanding capital market integration at the national and regional levels is important toward the goals outlined above. Recognizing there may be vast regional differences, we also estimate the degree of capital mobility for different regions based on their level of economic development. In light of these recent developments, it is hoped that our estimation results bear some policy relevance. In a pioneering study, Feldstein and Horioka (hereafter FH) (1980) evaluate the degree of cross-country capital mobility by estimating the correlation between saving and investment, also referred to as the saving-retention rate, based on cross-sectional data of OECD countries. They argue that if capital mobility is high, incremental saving in one country would seek investment opportunities with the highest possible risk-adjusted returns around the world, resulting in low correlation between national saving and national investment. Under financial autarky, a country’s domestic investment must be financed exclusively by her domestic saving, resulting in perfect correlation between national saving and investment. In their results, the estimated saving-retention rate is quite high and is not statistically different from unity. This implies low capital mobility and contradicts a general consensus that capital is highly mobile among the OECD countries. While many subsequent studies of international capital mobility using cross-sectional, time-series, and panel data largely confirm the FH results, they provide alternative explanations and interpretations to this puzzle, including government policies such as budget deficit and current account targeting (Summers, 1988, Roubini, 1988 and Bayoumi, 1990). In addition, Baxter and Crucini (1993) and Mendoza (1991), among others, show that incorporating adjustment costs in inter-temporal models with built-in mobile capital can produce a correlation between domestic saving and investment as high as that observed in the data. Some studies have adapted the FH framework to examine capital mobility across regions within a country. A key advantage of examining domestic capital mobility via the FH framework is that, unlike national sovereignties, provinces are not subject to the current account solvency constraint that complicates the interpretation of the saving-retention rate. Bayoumi and Rose (1993) and Thomas (1993) estimate the saving-retention rate for the UK; Yamori (1995) and Dekle (1996) for Japan; Sinn (1992) for the US; and Thomas (1993) as well as Helliwell and McKitrick (1999) for Canada. For these countries, which are considered to have a well-integrated domestic capital market, the estimates are found to be not significantly different from zero. These studies provide a rationale for our adoption of the FH framework in studying capital mobility in China. Boyreau-Debray and Wei (2005) and Li (2010) estimate the saving-investment correlation in China using provincial-level data. Both studies conclude that China’s domestic capital mobility is low and its capital market is fragmented. The former also suggests that there is no evidence of increasing capital mobility over time in China. Our investigation is different from these two studies in four important aspects. First, we consider the influence of government on private capital mobility. Second, the estimation methods used in our paper explicitly account for cross-sectional dependence in panel data, which can arise from nationwise policies that simultaneously affect all provinces. Third, we examine capital mobility for individual regions in China. Fourth, we track detailed changes over time in the level of national and regional capital market integration. Our results indicate that there is a significant improvement in capital mobility over time in China, particularly for private capital in the more developed regions. The central and provincial governments, via their taxation, spending, and transfers, loosen the relationship between private saving and investment and appear to promote capital mobility particularly for less developed regions. There are considerable differences between more and less developed regions in terms of capital market integration.

Our results have important policy implications. There is now a consensus among many policy makers and academic researchers that there is a need to shift the domestic demand structure in China toward a consumption-driven growth model. Many international investors are concerned that excessive fixed-asset investment, particularly that under the discretion of local governments, is leading to production overcapacity, asset price bubbles, and unsustainable build-up of local government debts. All of which may have destabilizing effect on economic growth. Mobile capital represents an important vehicle in which borrowing for consumption can be promoted. Increasing domestic demand driven mainly by consumption can also lessen reliance on exports, thereby contributing to global-rebalancing. In addition, given that there are limited set of financial instruments being traded in China, capital mobility is a key mechanism that can facilitate risk-sharing among the Chinese provinces. We find evidence of increasing private capital mobility within China over 1978–2006. It should improve borrowing and consumption risk sharing in the private sector across Chinese provinces. Our results also show that there are significant regional differences in the level of private capital market integration. Private capital mobility in the more developed regions shows persistent and significant improvement since at least early 1990s and in the early 2000s becomes comparable to that in some developed countries in the 1970s and 1980s. In the less developed regions, government public investment and transfers seems to promote overall capital mobility. Private capital mobility in these regions only improves in the 2000s and appears to be below the level achieved in the more developed regions. China’s earlier reform efforts were favorable to the export-oriented coastal regions, resulting in rapid development along these areas and widening economic gap across regions. Such a gap represents a serious obstacle to the objective of promoting a more balanced and domestic-driven growth. Government policies since 2000 aimed at moving production to western and central regions may have fostered capital market integration in these areas although there are other possible contributing factors such as the banking reform in 2000 and WTO accession in 2001. It highlights the importance of continued efforts to promote capital mobility in order to rebalance the economic development landscape in China.