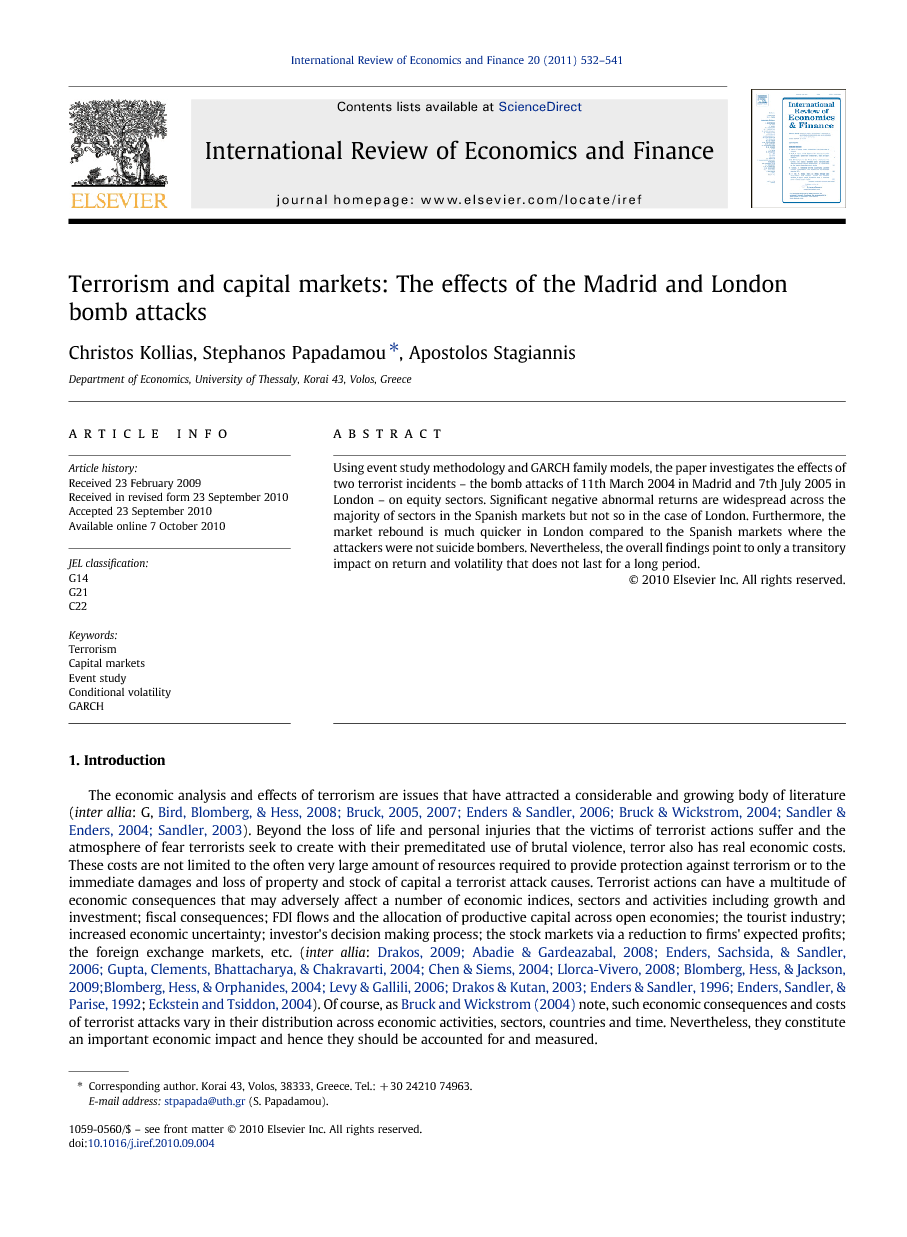 Using event study methodology and GARCH family models, the paper investigates the effects of two terrorist incidents – the bomb attacks of 11th March 2004 in Madrid and 7th July 2005 in London – on equity sectors. Significant negative abnormal returns are widespread across the majority of sectors in the Spanish markets but not so in the case of London. Furthermore, the market rebound is much quicker in London compared to the Spanish markets where the attackers were not suicide bombers. Nevertheless, the overall findings point to only a transitory impact on return and volatility that does not last for a long period.

The economic analysis and effects of terrorism are issues that have attracted a considerable and growing body of literature (inter allia: G, Bird et al., 2008, Bruck, 2005, Bruck, 2007, Enders and Sandler, 2006, Bruck and Wickstrom, 2004, Sandler and Enders, 2004 and Sandler, 2003). Beyond the loss of life and personal injuries that the victims of terrorist actions suffer and the atmosphere of fear terrorists seek to create with their premeditated use of brutal violence, terror also has real economic costs. These costs are not limited to the often very large amount of resources required to provide protection against terrorism or to the immediate damages and loss of property and stock of capital a terrorist attack causes. Terrorist actions can have a multitude of economic consequences that may adversely affect a number of economic indices, sectors and activities including growth and investment; fiscal consequences; FDI flows and the allocation of productive capital across open economies; the tourist industry; increased economic uncertainty; investor's decision making process; the stock markets via a reduction to firms' expected profits; the foreign exchange markets, etc. (inter allia: Drakos, 2009, Abadie and Gardeazabal, 2008, Enders et al., 2006, Gupta et al., 2004, Chen and Siems, 2004, Llorca-Vivero, 2008, Blomberg et al., 2009, Blomberg et al., 2004, Levy and Gallili, 2006, Drakos and Kutan, 2003, Enders and Sandler, 1996 and Enders et al., 1992; Eckstein and Tsiddon, 2004). Of course, as Bruck and Wickstrom (2004) note, such economic consequences and costs of terrorist attacks vary in their distribution across economic activities, sectors, countries and time. Nevertheless, they constitute an important economic impact and hence they should be accounted for and measured. In line with a number of previous studies such as for example Barros and Gil-Alana, 2008, Nikkinen et al., 2008, Eldor and Melnick, 2004, Drakos, 2004, Drakos, 2009 and Hon et al., 2004; this paper sets out to examine the impact of terrorist attacks on financial markets. It focuses its empirical investigation on two specific major terrorist incidents in Europe: the 11th March 2004 in Madrid and 7th July 2005 in London attacks and attempts to evaluate and assess their effects on capital markets. The two terrorist bomb attacks are in many respects regarded as the European equivalents of 9/11 albeit on a much lower scale if the number of fatalities and injuries is considered. In particular, using event study methodology, the paper examines how the stock markets in Barcelona, Madrid, Valencia and London reacted to the terrorist attacks in the two capital cities of Spain and the UK. Additionally, EGARCH models are employed to investigate the effect of these events on conditional volatility. The analysis that follows focuses not only on the general index of the aforementioned stock markets but also on the possible impact the terrorist incidents had on sectoral indices. Given these introductory remarks, the paper is structured as follows. The next section contains a brief review of the relevant literature followed by a description of the data and the methodology employed herein. It then turns to analyse the reaction for the four stock markets in Spain and the UK using, as already mentioned, both the general as well as the sectoral indices. Following this, the paper tries to provide plausible and tentative explanations for the different responses that it identifies. Finally Section 5 concludes the paper.

This paper, set out to examine how two major terrorist incidents in Madrid and London affected stock exchanges in Spain and the UK. Broadly, the empirical findings reported herein point to a similar reaction on the event day but a significantly different recovery in terms of days needed for the markets to rebound with the latter – i.e. London – recovering in a single trading day. Tentative explanations were advanced to explain this difference including the size, structure and liquidity of the markets involved. A further possible explanatory factor is the fact that the terrorist cell responsible for the bombings in Madrid was neutralized a few days later thus, in a sense, it continued to present a potential security threat for a short period of time. In contrast, this was not the case for the London terrorists since they were suicide bombers. Different and perhaps more effective institutional arrangements may also be cited. For instance, on July 9, two days after the event, the Bank of England, HM Treasury and the Financial Services Authority revealed that, immediately after the attacks, they had instigated contingency plans (created after 9/11 for such an eventuality) to ensure that the UK financial markets could keep trading. Also, market volatility appears to have been significantly affected by the two incidents. Sectoral indices in the two countries also presented a varied picture with the Spanish ones being the most affected albeit not uniformly. With three exceptions, LSE sectors generally recover fairly quickly and the ones most affected are those with the comparative more costs suffered as a result of the event. Despite these findings, the dominant conclusion is that the overall net impact on the stock markets in both cases was only transitory. It is quite possible that apart from the creation of widespread mayhem and sheer terror, another aim of such attacks by terrorist organizations such as al-Qaida is to disrupt and adversely affect the venue country's economy. On the basis of the findings reported herein, it would appear that, in terms of the latter aim, such actions are ineffective at least as far as the operation of the stock markets is concerned. Any negative effects are clearly short-lived. This however may not be so when it comes to the feeling of insecurity among the general public that such attacks create.