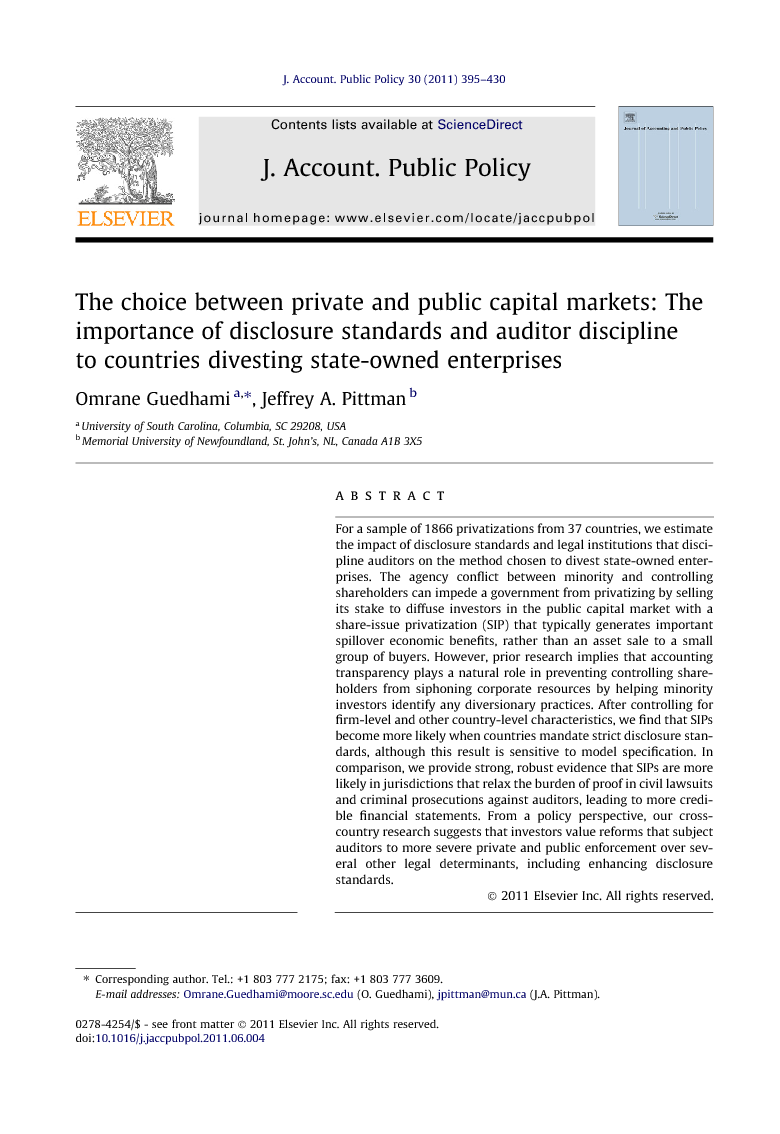 For a sample of 1866 privatizations from 37 countries, we estimate the impact of disclosure standards and legal institutions that discipline auditors on the method chosen to divest state-owned enterprises. The agency conflict between minority and controlling shareholders can impede a government from privatizing by selling its stake to diffuse investors in the public capital market with a share-issue privatization (SIP) that typically generates important spillover economic benefits, rather than an asset sale to a small group of buyers. However, prior research implies that accounting transparency plays a natural role in preventing controlling shareholders from siphoning corporate resources by helping minority investors identify any diversionary practices. After controlling for firm-level and other country-level characteristics, we find that SIPs become more likely when countries mandate strict disclosure standards, although this result is sensitive to model specification. In comparison, we provide strong, robust evidence that SIPs are more likely in jurisdictions that relax the burden of proof in civil lawsuits and criminal prosecutions against auditors, leading to more credible financial statements. From a policy perspective, our cross-country research suggests that investors value reforms that subject auditors to more severe private and public enforcement over several other legal determinants, including enhancing disclosure standards.

We analyze the impact of legal institutions that shape the credibility of corporate financial reporting on the choice between divesting a state-owned enterprise by selling some or all of a government’s stake to dispersed investors in the public capital market with a share-issue privatization, or in the private capital market by negotiating an asset sale to a small set of buyers. Although governments generally prefer SIPs that prior research suggests generate several important benefits that can drive the development of their economies, the agency conflict between controlling and minority shareholders can frustrate this policy option. Shleifer and Vishny, 1997 and La Porta et al., 2000 argue that the primary agency conflict besetting firms outside the US and the UK is the expropriation of smaller investors by controlling shareholders, rather than the expropriation of all shareholders by managers. Since outside investors are understandably reluctant to participate in share issues when they rationally anticipate that controlling shareholders will exploit their positions to pocket corporate resources, accounting transparency can play a natural role in preventing these insiders from concealing their diversionary practices. Our research provides insight on which financial reporting-related institutions have a chilling effect on insiders’ hiding incentives, which is evident in how a government privatizes a state-run firm. Countries are eager to improve corporate governance to alleviate the agency conflict between controlling and minority shareholders that represents a major obstacle to conducting a share-issue privatization. In a sample of 1866 privatizations from 37 countries, we find that investors value reforms that increase the severity of private and public enforcement against auditors for issuing an unqualified opinion on materially deficient financial statements over several other legal determinants, including adopting better disclosure standards. Economically, we estimate that, on average, share-issue privatizations become 13% and 31% more likely when the variables that calibrate the burden of proof in civil and criminal litigation against auditors in our regressions are lowered from the 90th to the 10th percentiles, respectively. Our evidence that external monitoring of privatized firms improves when countries liberalize their securities laws to impose more discipline on auditors complements recent international research that suggests that institutions that constrain insiders’ discretion over the financial reporting process enhance accounting transparency more than formal disclosure standards; e.g., Ball et al., 2003, Haw et al., 2004 and Guedhami and Pittman, 2006. More generally, we contribute to the expanding literature on the link between countries’ institutions and good corporate governance. However, rather than ascribing causality to our evidence, we caution that our analysis only documents associations.