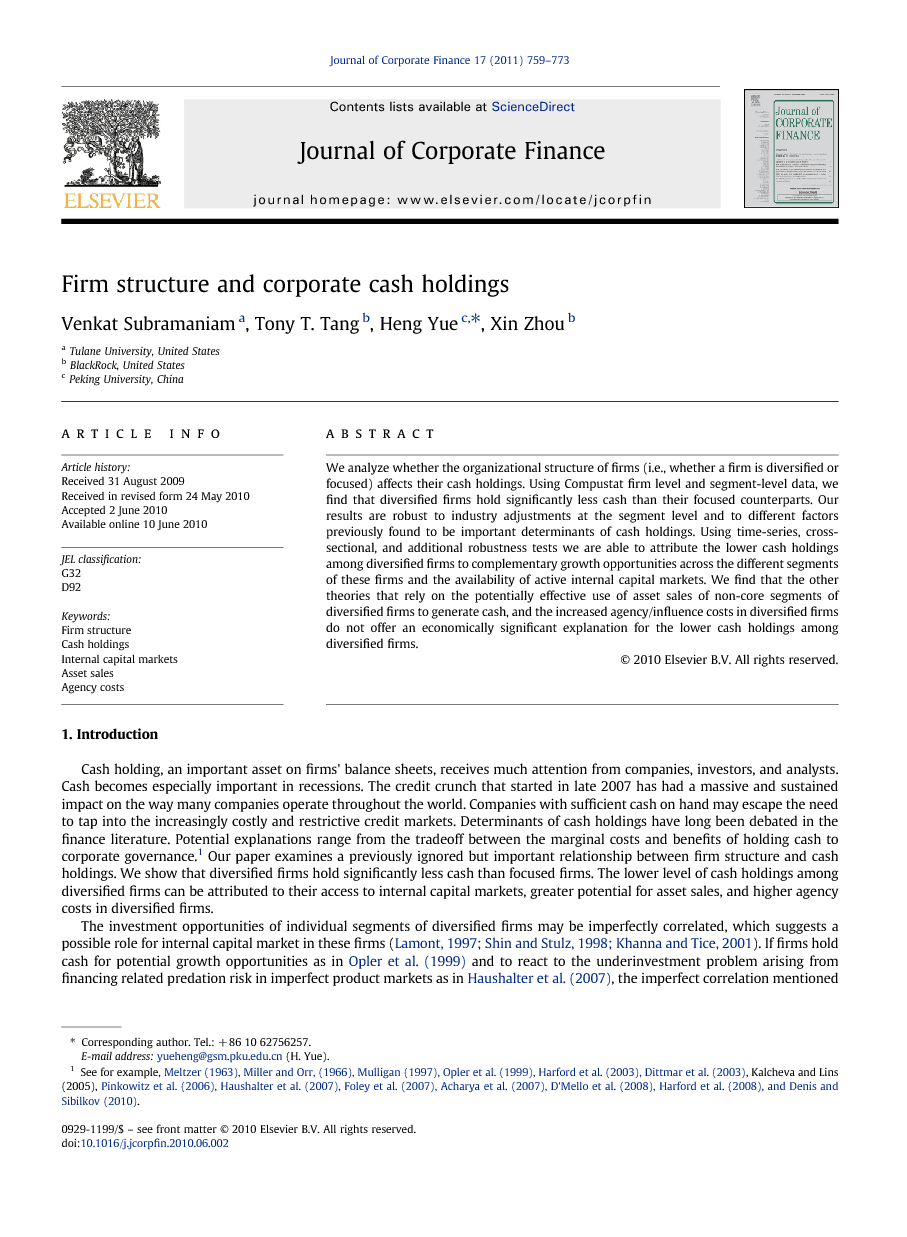 This paper analyzes the effect of firms' organizational structure (i.e., whether a firm is diversified or focused) on their cash holdings. Focusing on organizational structure allows us to explore non-governance related cash determinants, which complements the recent spate of research on the impact of governance mechanisms on cash holdings. There are several reasons why firm structure could affect cash holdings. We examine three hypotheses, the complementary growth, asset sales, and influence cost hypotheses. First, in diversified firms, since the time-series of investment opportunities for different segments may not be perfectly correlated, the total cash need for a diversified firm may be less volatile over time. If firms hold cash for potential growth needs, diversified firms would need less to meet the investment need at any one point in time. Additionally, if there is an active internal capital market within diversified firms, the cash flow of one segment is available as capital for another segment. This reduces the need for external capital thereby reducing a benefit of holding cash. Second, diversified firms are more likely than single-segment firms to be able to raise funds by selling substantial assets, especially assets of non-core segments. This reduces the benefits of cash holdings. Hence, firms with more than one segment should have lower levels of cash holdings. Finally, agency problems, especially influence costs that arise from segment-managers' value-dissipating competition for firm-wide resources, are more severe among diversified firms than single-segment firms. Thus the marginal cost of holding cash and liquid assets, which exacerbate the agency costs, are higher for diversified firms than for focused firms. Hence, we would expect diversified firms to hold less cash. All three hypotheses predict that diversified firms will have less cash holdings than their stand-alone counterparts. Using Compustat firm level and segment-level data in the 1988–2006 period, we find that diversified firms hold significantly less cash than their focused counterparts. Our results are robust to industry adjustments at the segment level and to different factors previously found to be important determinants of cash holdings. Using time-series, cross-sectional, and additional robustness tests we are able to attribute the lower cash holdings among diversified firms to complementary growth opportunities across the different segments of these firms and the availability of internal capital markets. We find that the other theories that rely on the potentially effective use of asset sales to generate cash, and the increased agency costs in diversified firms are not always statistically significant in robustness tests, and nor are the results economically significant in explaining the lower cash holdings among diversified firms.