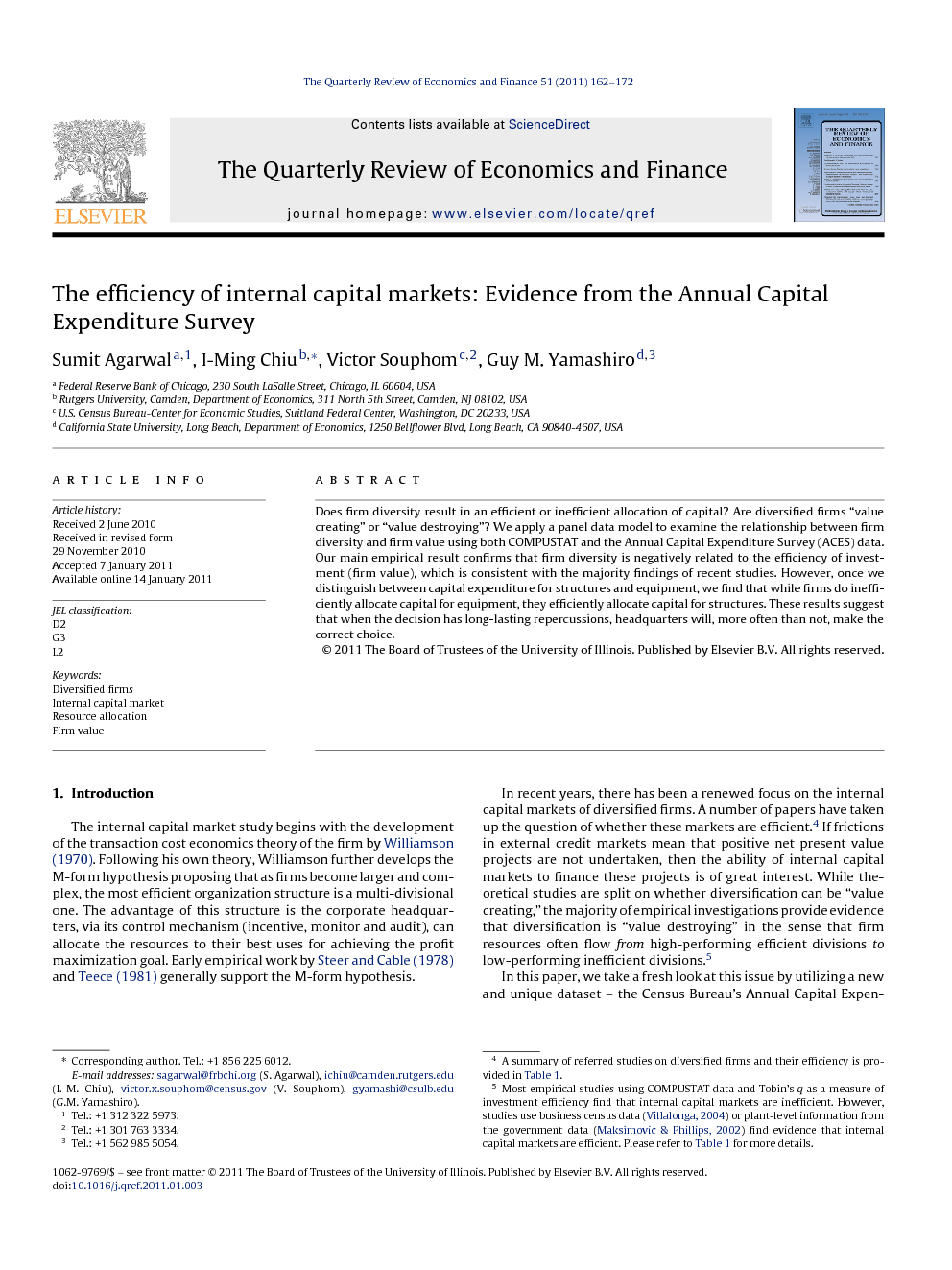 Does firm diversity result in an efficient or inefficient allocation of capital? Are diversified firms “value creating” or “value destroying”? We apply a panel data model to examine the relationship between firm diversity and firm value using both COMPUSTAT and the Annual Capital Expenditure Survey (ACES) data. Our main empirical result confirms that firm diversity is negatively related to the efficiency of investment (firm value), which is consistent with the majority findings of recent studies. However, once we distinguish between capital expenditure for structures and equipment, we find that while firms do inefficiently allocate capital for equipment, they efficiently allocate capital for structures. These results suggest that when the decision has long-lasting repercussions, headquarters will, more often than not, make the correct choice.

Efficient Internal Capital market theory suggests that diversified firms are able to channel resources to their best uses and therefore diversity is “value creating”. However, the majority of recent empirical findings reveal that diversity is “value destroying”. The motivations for this paper were twofold: (1) determine the robustness of the established empirical finding that greater firm diversity results in the inefficient internal allocation of capital, and (2) add value to the debate surrounding the efficiency of internal capital markets. Using both COMPUSTAT and ACES, we confirm that firm diversity is negatively related to the efficiency of investment. This empirical finding holds for various definitions of efficiency, methods of segmentation, and data sets. Thus, consistent with much of the existing empirical literature, we find that diversification reduces firm value. The primary contribution of this paper, however, is that we are able to provide a clearer link between diversification and capital allocation. We present evidence that while firms do inefficiently allocate equipment, they efficiently allocate structures. Implying that diversity is “value destroying” in equipment, but “value creating” in structures. We argue that this is consistent with the framework developed by RSZ (2000). In their model it is optimal for division to choose “efficient” investment. However, “defensive” equipment-investment in our case is chosen since it protects the investing division better against poaching by the other division. While perhaps our empirical results do not provide definitive answers about the exact source of the inefficiency, they do help in refining our thinking about the relationship between diversity and efficiency. Internal capital market may not function efficiently because the existence of power struggle among divisions. So, under what circumstances can we expect headquarters to make the “right” decision? Our empirical findings hint that when the decision has long-lasting, non-specific repercussions, headquarters will, more often than not, make the correct choice.