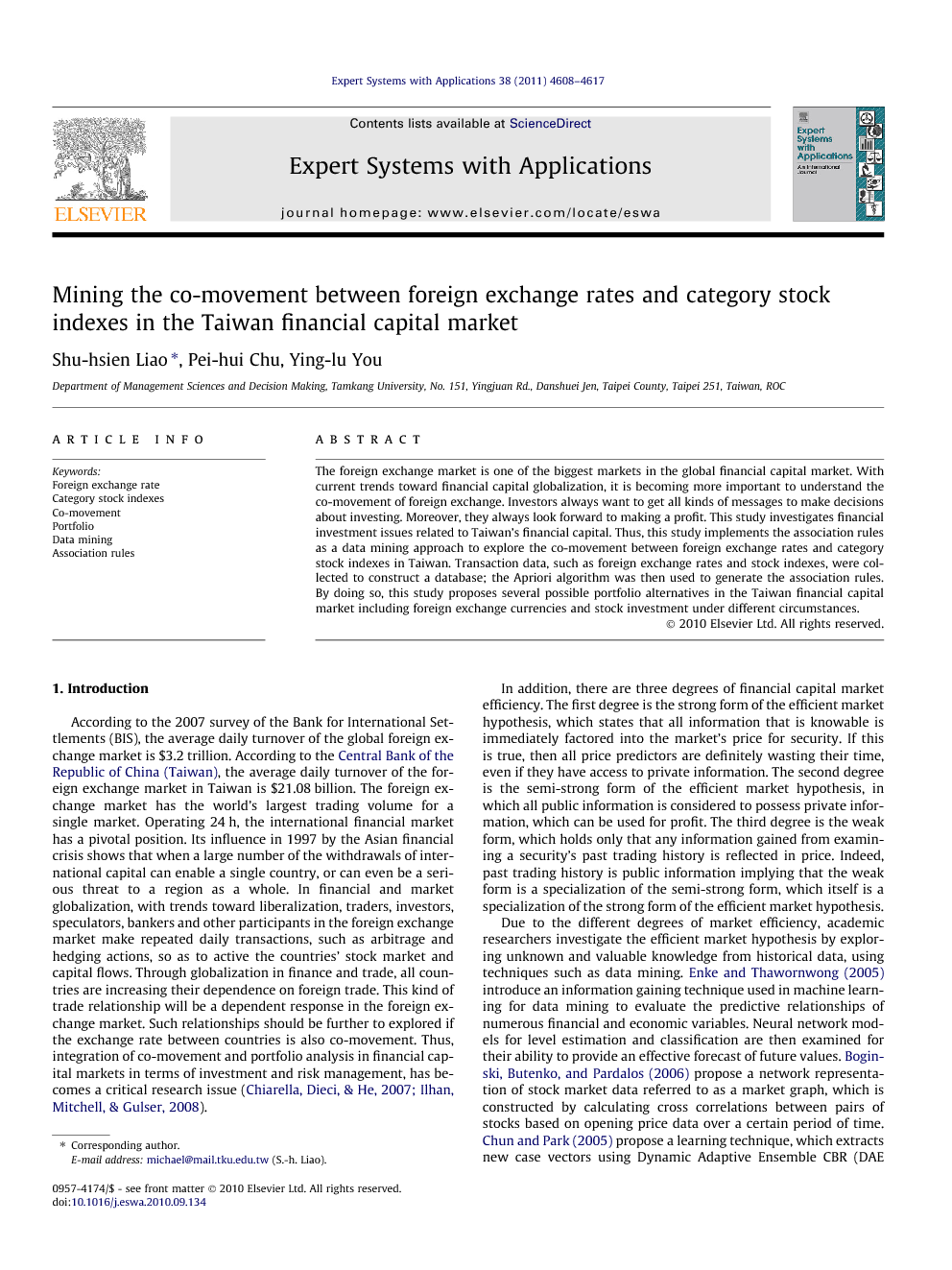 According to the 2007 survey of the Bank for International Settlements (BIS), the average daily turnover of the global foreign exchange market is $3.2 trillion. According to the Central Bank of the Republic of China (Taiwan), the average daily turnover of the foreign exchange market in Taiwan is $21.08 billion. The foreign exchange market has the world’s largest trading volume for a single market. Operating 24 h, the international financial market has a pivotal position. Its influence in 1997 by the Asian financial crisis shows that when a large number of the withdrawals of international capital can enable a single country, or can even be a serious threat to a region as a whole. In financial and market globalization, with trends toward liberalization, traders, investors, speculators, bankers and other participants in the foreign exchange market make repeated daily transactions, such as arbitrage and hedging actions, so as to active the countries’ stock market and capital flows. Through globalization in finance and trade, all countries are increasing their dependence on foreign trade. This kind of trade relationship will be a dependent response in the foreign exchange market. Such relationships should be further to explored if the exchange rate between countries is also co-movement. Thus, integration of co-movement and portfolio analysis in financial capital markets in terms of investment and risk management, has becomes a critical research issue (Chiarella et al., 2007 and Ilhan et al., 2008). In addition, there are three degrees of financial capital market efficiency. The first degree is the strong form of the efficient market hypothesis, which states that all information that is knowable is immediately factored into the market’s price for security. If this is true, then all price predictors are definitely wasting their time, even if they have access to private information. The second degree is the semi-strong form of the efficient market hypothesis, in which all public information is considered to possess private information, which can be used for profit. The third degree is the weak form, which holds only that any information gained from examining a security’s past trading history is reflected in price. Indeed, past trading history is public information implying that the weak form is a specialization of the semi-strong form, which itself is a specialization of the strong form of the efficient market hypothesis. Due to the different degrees of market efficiency, academic researchers investigate the efficient market hypothesis by exploring unknown and valuable knowledge from historical data, using techniques such as data mining. Enke and Thawornwong (2005) introduce an information gaining technique used in machine learning for data mining to evaluate the predictive relationships of numerous financial and economic variables. Neural network models for level estimation and classification are then examined for their ability to provide an effective forecast of future values. Boginski, Butenko, and Pardalos (2006) propose a network representation of stock market data referred to as a market graph, which is constructed by calculating cross correlations between pairs of stocks based on opening price data over a certain period of time. Chun and Park (2005) propose a learning technique, which extracts new case vectors using Dynamic Adaptive Ensemble CBR (DAE CBR). The main idea of DAE CBR originates from finding combinations of parameters and updating and applying an optimal CBR model to an application or domain area. These concepts are investigated against the backdrop of a practical application involving the prediction of a stock market index. In addition, Rapach and Wohar (2006) implement an analysis of in-sample and out-of-sample tests of stock return predictability in an effort to better understand the nature of the empirical evidence in return predictability. Their study finds that certain financial variables display significant in-sample and out-of sample predictive ability with respect to stock returns. Overall, most studies consider stock market analysis as a time series problem, and there have been few studies using stock market efficiency to explore the possible cause-and-effect relationships among different stock categories or the influence of outside factors (Liao, Ho, & Lin, 2008). Accordingly, this study investigates the following research issues related to the co-movement between exchange rates and categorical stock indexes in the Taiwan financial capital market. They include: (1) the study of the changes of 13 foreign currency exchange rates indexes by association rules to find a similar trend in foreign currency change, and but also to identify the co-movement of foreign currency; (2) the use association rules to understand the co-movement between 13 international exchange rates and 30 categorical stock indexes in Taiwan; (3) the 13 subjects of this study will be stalls in foreign currency in accordance with their national and regional classification. Compared to exploring the same geographical area, the financial trading environment of countries is similar to changes foreign currency exchange rates; (4) to provide an opportunity for the foreign exchange market and stock market investors to invest in the Taiwan market with a different direction and a new way of thinking. The rest of this study is organized as follows. In Section 2, we present the background of foreign exchange market management and the stock market in Taiwan. Section 3 describes the methodology, including the research framework, data sources, and database design. Section 4 presents the data mining approach, association rules, and data mining tool – SPSS Clementine and discusses research findings. Section 5 illustrates the data mining results and Section 6 describes research findings and managerial implications. Finally, Section 7 presents a brief conclusion.

This study considers that stock markets have strong associations with both inside and outside factors. Some foreign exchange rates and stock index categories of stocks are rising or dropping together at the same time. For individual or institutional investors, finding indications for the trends of stock market associations is a valuable task. Data mining of foreign exchange and stock market analysis and interpretation of the properties of the data mining results gives new insights into possible associations in financial capital markets. In this study, we use a data mining approach, the Apriori algorithm, to generate association rules. By doing so, this study finds that different possible portfolios of foreign exchange currencies and stock category investments can be implemented in the Taiwan financial capital market. Thus, this case study of implementing data mining approaches and integrating them into financial investment research in Taiwan is an example for future research and implementation.