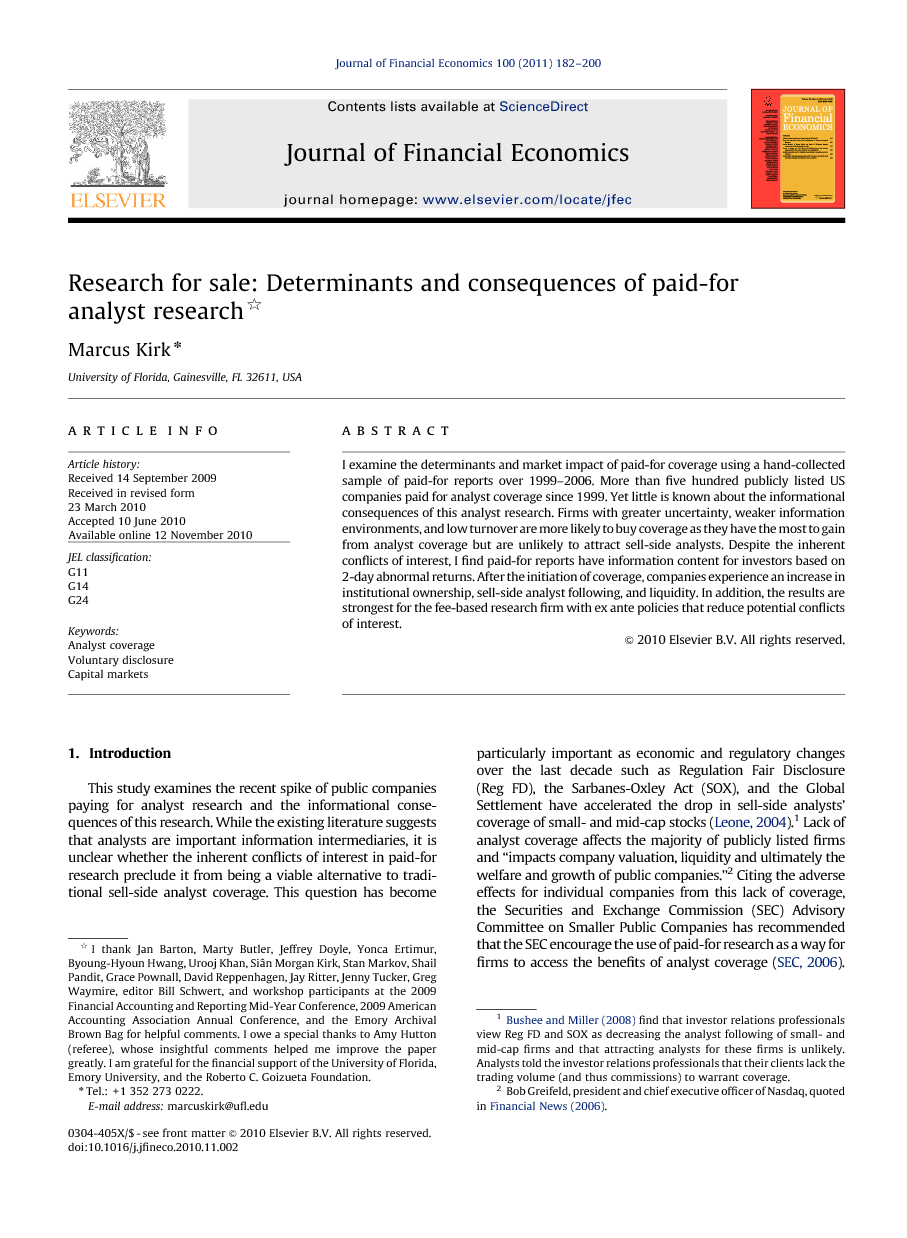 I examine the determinants and market impact of paid-for coverage using a hand-collected sample of paid-for reports over 1999–2006. More than five hundred publicly listed US companies paid for analyst coverage since 1999. Yet little is known about the informational consequences of this analyst research. Firms with greater uncertainty, weaker information environments, and low turnover are more likely to buy coverage as they have the most to gain from analyst coverage but are unlikely to attract sell-side analysts. Despite the inherent conflicts of interest, I find paid-for reports have information content for investors based on 2-day abnormal returns. After the initiation of coverage, companies experience an increase in institutional ownership, sell-side analyst following, and liquidity. In addition, the results are strongest for the fee-based research firm with ex ante policies that reduce potential conflicts of interest.

Using a sample of companies that bought analyst coverage during 1999–2006, I provide evidence on the determinants of the decision to hire an analyst and the market impact of paid-for analyst research. My empirical analysis shows that firms with greater uncertainty about future cash flows, harder to value assets, lower turnover, and lower institutional ownership are more likely to purchase analyst coverage. This is consistent with the notion that these firms have the most to gain from reducing uncertainty and using an intermediary as a bonding mechanism to credibly communicate information but are less likely to attract sell-side coverage because they require more effort to follow and brokerage firms cannot justify covering small firms with low trading volume. I find investor reaction to paid-for reports as measured by 2-day CARs is economically large and in the direction consistent with intuition and the extant sell-side literature. My results also show an increase in institutional investor holding, sell-side analysts, and liquidity following after the initiation of paid-for coverage. However, paid-for coverage is not unconditionally valuable. The policies of fee-based firms that reduce potential conflicts of interest also play a key role. In a supplemental analysis of the two major fee-based firms, the market impact of paid-for coverage is strongest from the fee-based firm with policies and procedures that help manage the conflict. This evidence raises questions for future research and the analyst industry. For researchers, this study provokes questions about the effectiveness of various forms of analyst research. Regulators view the lack of sell-side analyst research as a major problem yet solutions such as paid-for coverage are controversial. Stock exchanges with a high percentage of companies with little or no analyst coverage have shown an interest in considering other mechanisms. For example, Nasdaq previously explored a joint venture with Reuters called the Independent Research Network (IRN). For the analyst industry, this study raises questions about whether the traditional equity research model is the only viable mechanism. Under this structure, about 60% of publicly listed firms have no analyst coverage. My results imply that paid-for coverage could be a model by which companies can achieve the benefits of analyst coverage despite lacking the characteristics to be attractive to sell-side analysts. These findings reinforce the SEC advisory committee's endorsement of paid-for research and are consistent with the notion that paid-for analyst coverage can play a valuable role in the capital markets, especially in helping the economic development of small- and medium-cap companies.