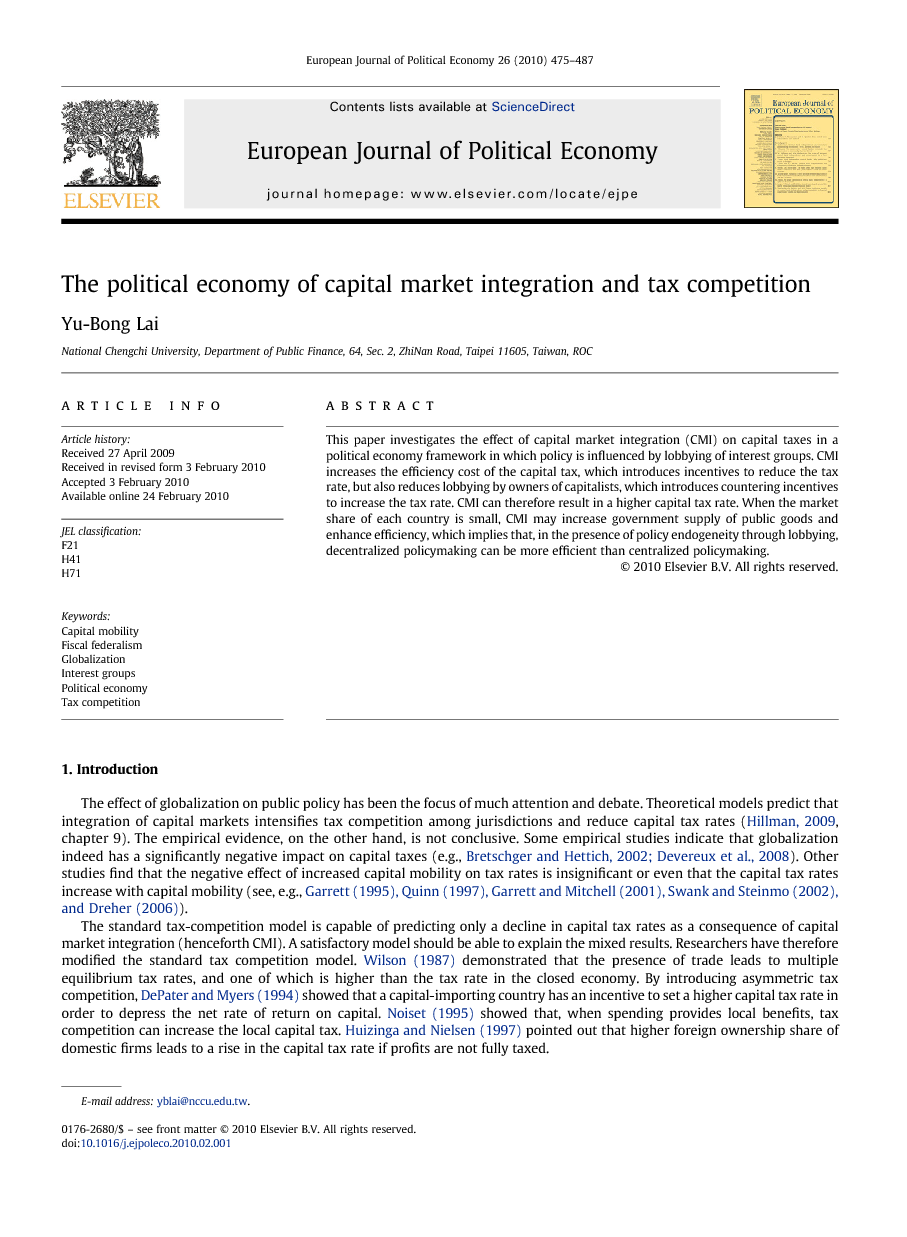 This paper investigates the effect of capital market integration (CMI) on capital taxes in a political economy framework in which policy is influenced by lobbying of interest groups. CMI increases the efficiency cost of the capital tax, which introduces incentives to reduce the tax rate, but also reduces lobbying by owners of capitalists, which introduces countering incentives to increase the tax rate. CMI can therefore result in a higher capital tax rate. When the market share of each country is small, CMI may increase government supply of public goods and enhance efficiency, which implies that, in the presence of policy endogeneity through lobbying, decentralized policymaking can be more efficient than centralized policymaking.

The effect of globalization on public policy has been the focus of much attention and debate. Theoretical models predict that integration of capital markets intensifies tax competition among jurisdictions and reduce capital tax rates (Hillman, 2009, chapter 9). The empirical evidence, on the other hand, is not conclusive. Some empirical studies indicate that globalization indeed has a significantly negative impact on capital taxes (e.g., Bretschger & Hettich, 2002 and Devereux et al., 2008). Other studies find that the negative effect of increased capital mobility on tax rates is insignificant or even that the capital tax rates increase with capital mobility (see, e.g., Garrett, 1995, Quinn, 1997, Garrett & Mitchell, 2001, Swank & Steinmo, 2002 and Dreher, 2006). The standard tax-competition model is capable of predicting only a decline in capital tax rates as a consequence of capital market integration (henceforth CMI). A satisfactory model should be able to explain the mixed results. Researchers have therefore modified the standard tax competition model. Wilson (1987) demonstrated that the presence of trade leads to multiple equilibrium tax rates, and one of which is higher than the tax rate in the closed economy. By introducing asymmetric tax competition, DePater and Myers (1994) showed that a capital-importing country has an incentive to set a higher capital tax rate in order to depress the net rate of return on capital. Noiset (1995) showed that, when spending provides local benefits, tax competition can increase the local capital tax. Huizinga and Nielsen (1997) pointed out that higher foreign ownership share of domestic firms leads to a rise in the capital tax rate if profits are not fully taxed. I investigate the effect of CMI on the capital taxes in a political economy framework.1Persson & Tabellini, 1992, Lockwood & Makris, 2006 and Haufler et al., 2008 have looked at the effect of CMI through voting. It seems unlikely that decisions about tax rates are made by voting. Rather we should investigate the role of interest groups. Haufler, 1997 and Lorz, 1998 have considered the influence of interest groups but in settings that differ from mine. Differences between these latter papers and the present paper are described in Section 3.3. My endogenous policy model builds on Zodrow and Mieszkowski (1986), who described several identical countries. Each government imposes a tax on capital according to the source principle and uses tax revenue to finance a public consumption good. There are two types of residents, capitalists and workers, in a country. CMI increases capital mobility, which increases the efficiency cost of capital taxes and leads policymakers to lower capital tax rates. When policymakers are subject to political influence, CMI can either increase or reduce capital tax rates. When the economy is closed, capitalists bear the entire capital tax burden. Capitalists have an incentive to lobby for a lower capital tax rate. They gain from an increase in private consumption, which outweighs their loss from a decline in the public consumption. When the economy is open, a part of the tax burden is shifted to the workers. Since the capitalists do not bear the entire tax burden, their gains from lobbying to reduce the capital tax rate are reduced as a result of CMI. If tax competition among governments is sufficiently intense, most of the capital tax burden is shifted to the workers, and thus capitalists may even lobby for a higher tax rate. This effect through political endogenous policy has not been considered. I show how the political effect can reverse conventional conclusions. A well-known conclusion is that tax competition results in sub-optimal supply of public goods. I show that interest groups can either enhance or reduce efficiency, depending on the extent of the tax competition. If tax competition is intense, capitalists bear a small proportion of the capital tax burden, and so they will lobby for a higher capital tax rate to benefit from a larger supply of the public good. Lobbying thus mitigates the under-provision of public goods, or even leads to overprovision. If tax competition is mild, capitalists' lobbying results in a lower tax rate, and thus aggravates the problem of under-provision of public goods. The above conclusion is related to another result of the standard tax competition model, that is, that an increase in intensity of tax competition lowers supply of public goods and increases the inefficiency of tax competition (Hoyt, 1991). I show that, in the presence of lobbying, the opposite may occur, again because of capitalists' lobbying incentives. A centralized government eliminates capital mobility. The equilibrium policy in the closed economy can be interpreted as that under centralized policymaking. Similarly, the equilibrium policy in the open economy can be interpreted as that under decentralized policymaking. It has been argued that the inefficiency of tax competition stems from decentralized policymaking and that a remedy for the inefficiency of tax competition is to centralize policymaking or to coordinate policy among countries. The findings of this paper, however, show that in the presence of lobbying, centralized policymaking is not necessarily more efficient than decentralized policymaking.2 Section 2 introduces the model underlying the analysis. Section 3 discusses the political effect of CMI and explains why CMI may increase capital tax rates. I turn to the effect of lobbying on tax competition in Section 4 and show how lobbying can reverse conclusions of the standard tax competition model. Section 5 extends the basic model to incorporate lobbying by workers and endogenous labor supply. Concluding remarks are in Section 6.

The literature on political endogeneity of policies shows how policies change when interest groups and political responses are taken into account (Hillman, 1989 and Grossman & Helpman, 2002). I have shown how political endogeneity of policies changes the conclusions regarding integration of capital markets. My results are consistent with the empirical evidence that CMI may raise or lower capital taxes. I have shown how the extent of the tax competition among countries affects the political influence of capitalists, which can reverse conventional results. If tax competition is intense, then the political pressure from the capitalists to reduce the tax rate will only be slight, or they may even seek to increase the tax rate because most of the tax burden is shifted to the workers. As a result, capitalists' lobbying mitigates the underprovision of the public good, and may enhance efficiency. A related result is that the level of the public goods increases with the number of countries, which is different from the finding in Hoyt (1991). My conclusions can be cast in terms of a comparison between centralized and decentralized government.25 I have highlighted the effect of the extent of tax competition on lobbies' incentives. Although more intense tax competition is characterized by a smaller market share of each competing country in this paper, I believe that my conclusions can be sustained in other situations resulting in more intense tax competition between countries, such as a reduction in capital mobility costs. In this paper, the policymakers are exogenously determined. Then a question arises: where do the policymakers come from? A more satisfactory setting is to endogenize the determination of the policymakers (e.g., Besley and Coate, 2001). This issue, I believe, merits further research.