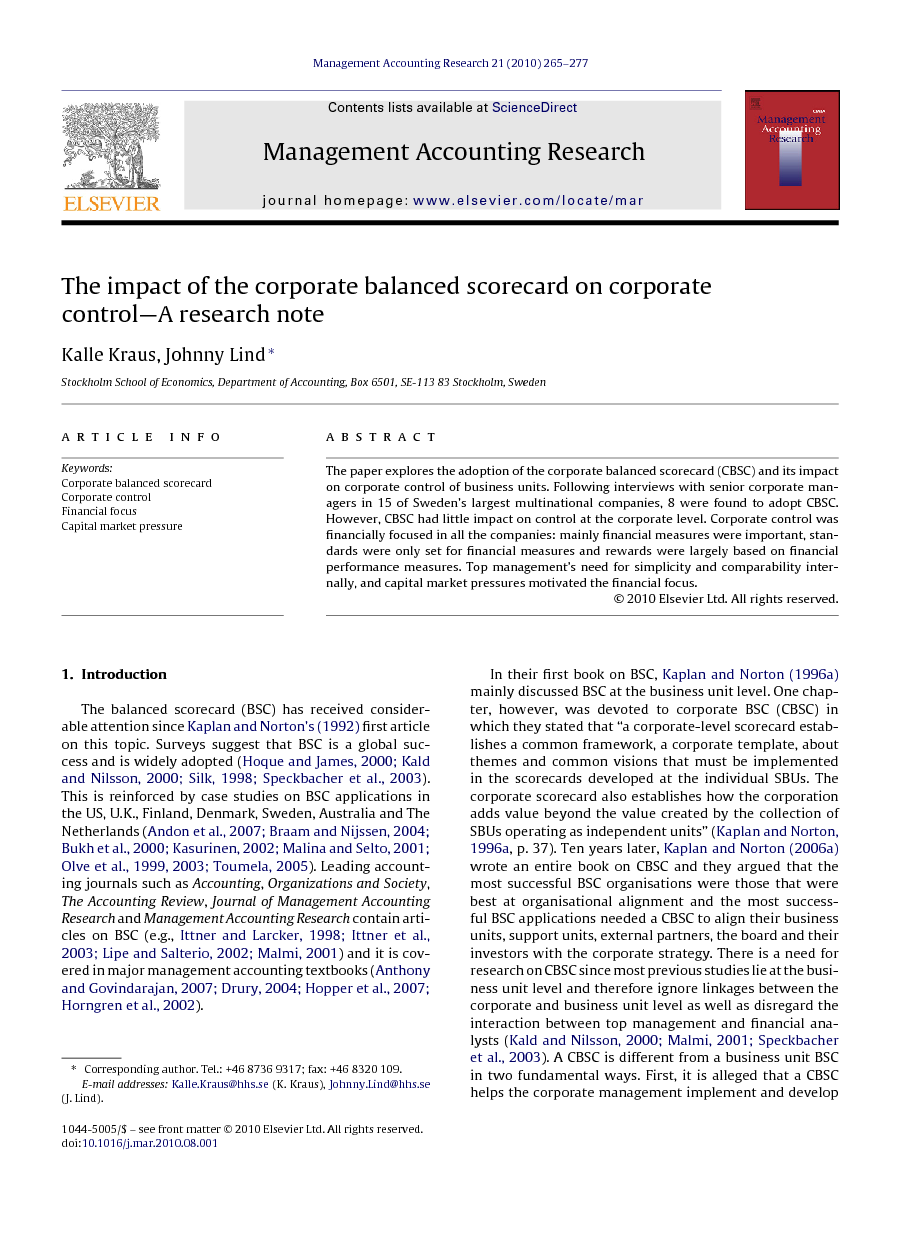 The paper explores the adoption of the corporate balanced scorecard (CBSC) and its impact on corporate control of business units. Following interviews with senior corporate managers in 15 of Sweden's largest multinational companies, 8 were found to adopt CBSC. However, CBSC had little impact on control at the corporate level. Corporate control was financially focused in all the companies: mainly financial measures were important, standards were only set for financial measures and rewards were largely based on financial performance measures. Top management's need for simplicity and comparability internally, and capital market pressures motivated the financial focus.

The balanced scorecard (BSC) has received considerable attention since Kaplan and Norton's (1992) first article on this topic. Surveys suggest that BSC is a global success and is widely adopted (Hoque and James, 2000, Kald and Nilsson, 2000, Silk, 1998 and Speckbacher et al., 2003). This is reinforced by case studies on BSC applications in the US, U.K., Finland, Denmark, Sweden, Australia and The Netherlands (Andon et al., 2007, Braam and Nijssen, 2004, Bukh et al., 2000, Kasurinen, 2002, Malina and Selto, 2001, Olve et al., 1999, Olve et al., 2003 and Toumela, 2005). Leading accounting journals such as Accounting, Organizations and Society, The Accounting Review, Journal of Management Accounting Research and Management Accounting Research contain articles on BSC (e.g., Ittner and Larcker, 1998, Ittner et al., 2003, Lipe and Salterio, 2002 and Malmi, 2001) and it is covered in major management accounting textbooks ( Anthony and Govindarajan, 2007, Drury, 2004, Hopper et al., 2007 and Horngren et al., 2002). In their first book on BSC, Kaplan and Norton (1996a) mainly discussed BSC at the business unit level. One chapter, however, was devoted to corporate BSC (CBSC) in which they stated that “a corporate-level scorecard establishes a common framework, a corporate template, about themes and common visions that must be implemented in the scorecards developed at the individual SBUs. The corporate scorecard also establishes how the corporation adds value beyond the value created by the collection of SBUs operating as independent units” (Kaplan and Norton, 1996a, p. 37). Ten years later, Kaplan and Norton (2006a) wrote an entire book on CBSC and they argued that the most successful BSC organisations were those that were best at organisational alignment and the most successful BSC applications needed a CBSC to align their business units, support units, external partners, the board and their investors with the corporate strategy. There is a need for research on CBSC since most previous studies lie at the business unit level and therefore ignore linkages between the corporate and business unit level as well as disregard the interaction between top management and financial analysts (Kald and Nilsson, 2000, Malmi, 2001 and Speckbacher et al., 2003). A CBSC is different from a business unit BSC in two fundamental ways. First, it is alleged that a CBSC helps the corporate management implement and develop corporate strategy with a focus on the coordination of multiple strategic business units. Hence, a CBSC focuses on relationships between the top management and business unit managers and it differs from a business unit BSC, which concentrates on implementing and developing business strategy with a focus on the coordination of functional strategies with the aim of creating competitive advantage in the business landscape (Kaplan and Norton, 1996a and Kaplan and Norton, 2006a). Second, managers at the corporate level are responsible for managing internal as well as external expectations (Roberts et al., 2006). These dual responsibilities differentiate corporate managers from business unit managers in that the former, in addition to internal control of business units, also are responsible for the external reporting and communication with capital market actors. This paper responds to the call for more research on CBSC and investigates the adoption of CBSC and its impact on corporate control of business units. A CBSC is defined as a multi-dimensional performance measurement system at the corporate level where the measures are systematized in perspectives derived from Kaplan and Norton's original four (Malmi, 2001 and Speckbacher et al., 2003). Corporate control is defined, in accordance with Kaplan and Norton (2006a), as the process to coordinate and influence behaviour of managers of decentralized business units to realise company synergies. Hence, corporate control is exerted by corporate management, such as the Chief Executive Officer (CEO) and the Chief Financial Officer (CFO), over managers of business units. The paper also identifies company explanations of CBSC's impact on control at the corporate level. The findings draw from interviews with senior corporate level managers of 15 of the largest publicly listed Swedish multinational companies. This population is likely to use CBSC, as large companies appear to use scorecards more than small ones (Hoque and James, 2000 and Speckbacher et al., 2003). The next section lays out the theoretical foundations of the paper in three parts: CBSC-adoption; CBSC's impact on corporate level control; and opposing a priori arguments on CBSC's impact on corporate control. Then the research methods are described, the empirical results presented and discussed, and the paper ends with conclusions and suggestions for future research.