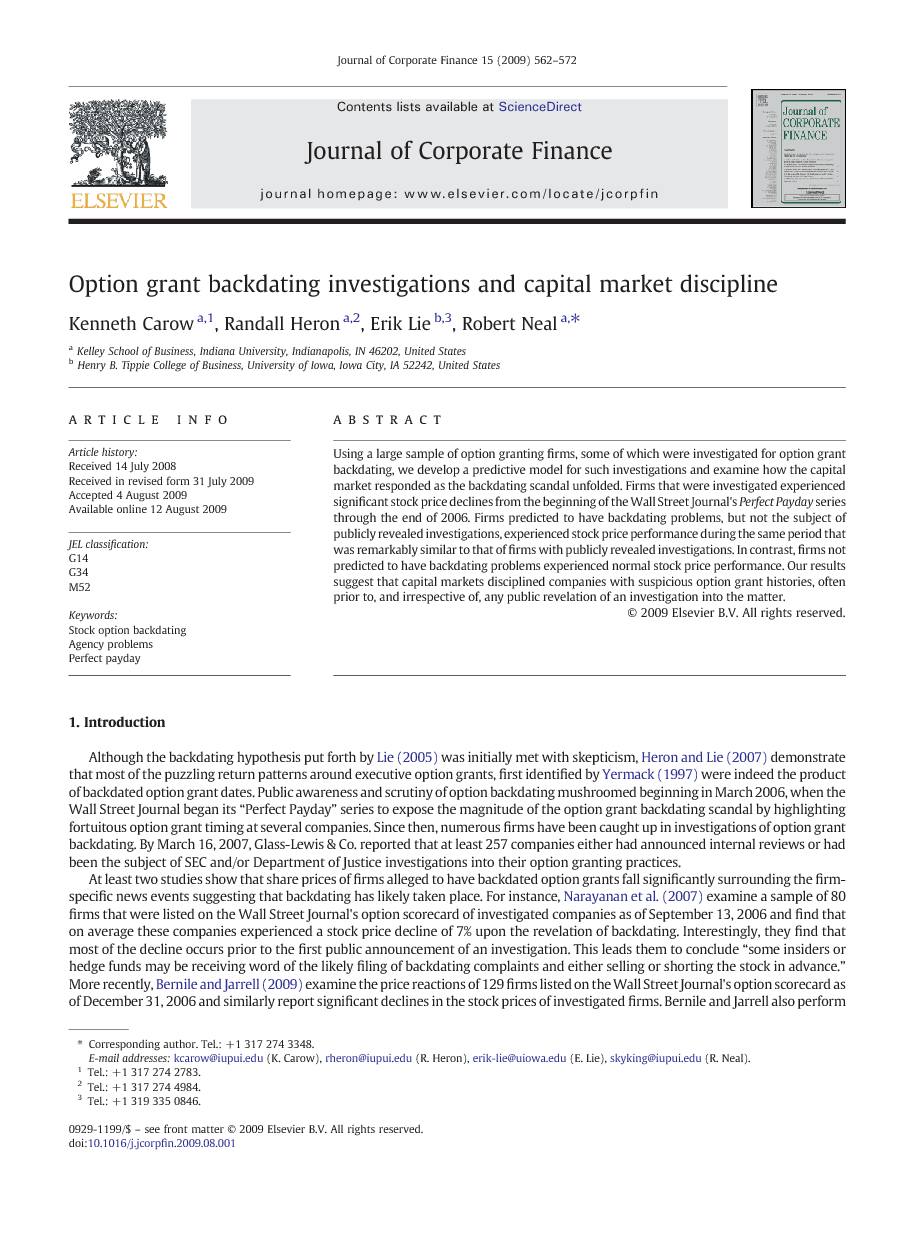 Using a large sample of option granting firms, some of which were investigated for option grant backdating, we develop a predictive model for such investigations and examine how the capital market responded as the backdating scandal unfolded. Firms that were investigated experienced significant stock price declines from the beginning of the Wall Street Journal's Perfect Payday series through the end of 2006. Firms predicted to have backdating problems, but not the subject of publicly revealed investigations, experienced stock price performance during the same period that was remarkably similar to that of firms with publicly revealed investigations. In contrast, firms not predicted to have backdating problems experienced normal stock price performance. Our results suggest that capital markets disciplined companies with suspicious option grant histories, often prior to, and irrespective of, any public revelation of an investigation into the matter.

The option backdating scandal surfaced in 2006, and as of March of 2007, the number of companies with publicly revealed investigations into their grant timing histories exceeded 250. This number, however, is significantly smaller than what academic researchers such as Heron and Lie (2009), Bebchuk et al. (2006), and Bizjak et al. (2008) suggest are likely to have backdating problems. This discrepancy raises the question as to whether academic researchers have over-estimated the magnitude of the option backdating scandal, or whether many firms will simply go unpunished for a variety of reasons, despite the signature traces of option backdating that can be uncovered by investigating their option granting histories. We address this question by modeling the likelihood of a public option investigation and of financial restatement amounts as a function of firm-specific characteristics, including several measures designed to uncover backdating (if it is present) in each firm's historical option granting practices. We find that capital markets began to anticipate which firms would have backdating problems and bid their stock prices down over time, as more information regarding the practice and option grant histories became known. When we use our logistic model of investigation likelihood and our regression model of restatement amounts for predictive purposes, we find that firms without publicly revealed investigations, but for which our models predict that option backdating is very likely, experienced very similar (poor) stock price performance as companies with publicly revealed investigations. In contrast, the stock price performance for the portfolio of firms for which our models predicted the likelihood of backdating to be low (in the lowest decile) is significantly better. These results suggest that as the backdating scandal unfolded and it became clear that more than a handful of firms were involved, capital market participants began to scrutinize the option grant histories of all firms and penalized those firms whose option grant patterns raise the suspicion of significant agency-related costs, regardless of whether the firm was the subject of a publicly revealed investigation. Collectively, our results are consistent with the evidence in Karpoff et al., 2008a and Karpoff et al., 2008b and with Bernile and Jarrell (2009) who show that reputational costs (agency-related costs imposed by capital markets) are significantly larger than non-agency-related costs for firms involved with (or even suspected of in the case of our sample) financial misrepresentation and self-dealing.