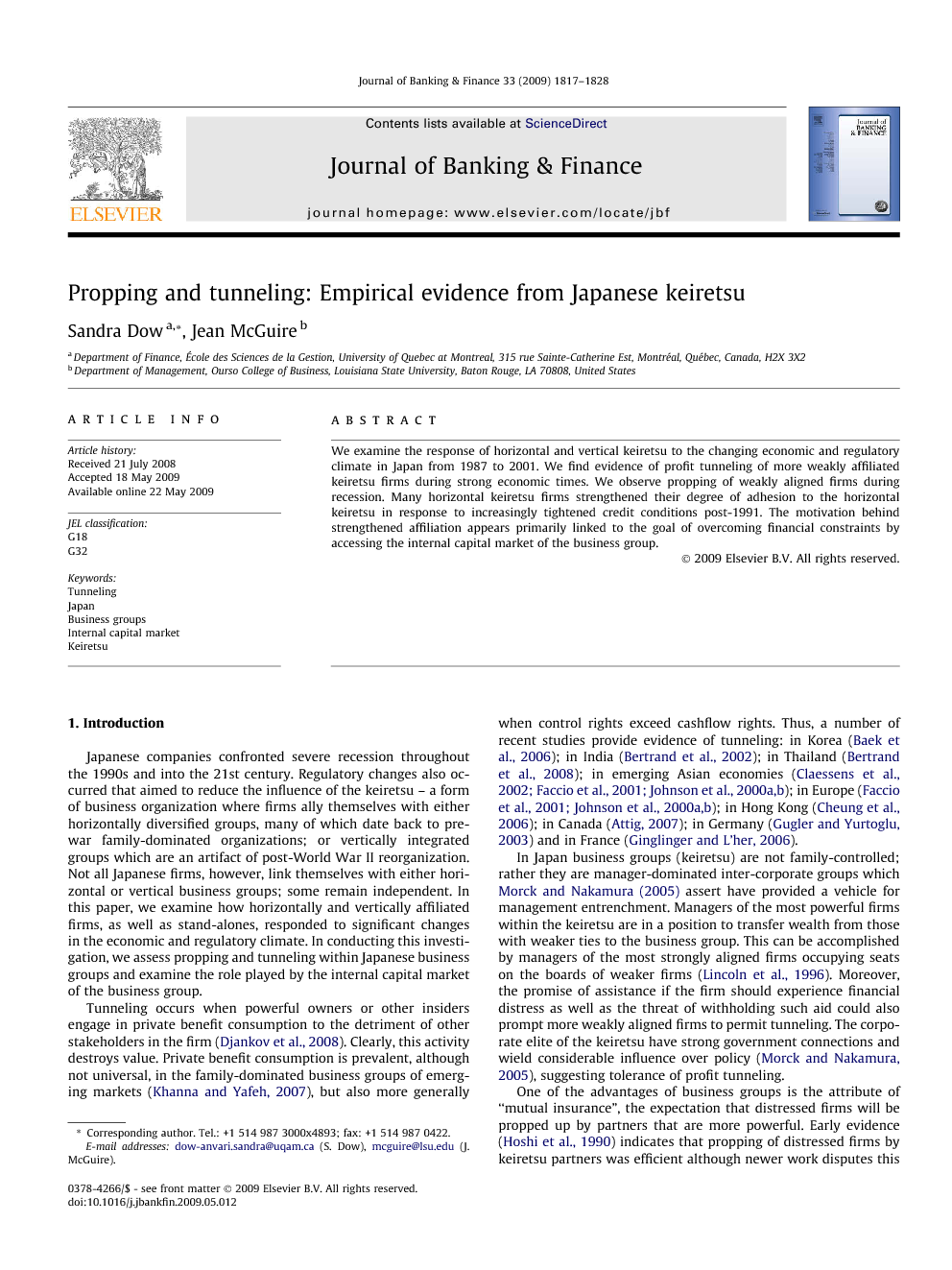 We examine the response of horizontal and vertical keiretsu to the changing economic and regulatory climate in Japan from 1987 to 2001. We find evidence of profit tunneling of more weakly affiliated keiretsu firms during strong economic times. We observe propping of weakly aligned firms during recession. Many horizontal keiretsu firms strengthened their degree of adhesion to the horizontal keiretsu in response to increasingly tightened credit conditions post-1991. The motivation behind strengthened affiliation appears primarily linked to the goal of overcoming financial constraints by accessing the internal capital market of the business group.

Japanese companies confronted severe recession throughout the 1990s and into the 21st century. Regulatory changes also occurred that aimed to reduce the influence of the keiretsu – a form of business organization where firms ally themselves with either horizontally diversified groups, many of which date back to pre-war family-dominated organizations; or vertically integrated groups which are an artifact of post-World War II reorganization. Not all Japanese firms, however, link themselves with either horizontal or vertical business groups; some remain independent. In this paper, we examine how horizontally and vertically affiliated firms, as well as stand-alones, responded to significant changes in the economic and regulatory climate. In conducting this investigation, we assess propping and tunneling within Japanese business groups and examine the role played by the internal capital market of the business group. Tunneling occurs when powerful owners or other insiders engage in private benefit consumption to the detriment of other stakeholders in the firm (Djankov et al., 2008). Clearly, this activity destroys value. Private benefit consumption is prevalent, although not universal, in the family-dominated business groups of emerging markets (Khanna and Yafeh, 2007), but also more generally when control rights exceed cashflow rights. Thus, a number of recent studies provide evidence of tunneling: in Korea (Baek et al., 2006); in India (Bertrand et al., 2002); in Thailand (Bertrand et al., 2008); in emerging Asian economies (Claessens et al., 2002, Faccio et al., 2001, Johnson et al., 2000a and Johnson et al., 2000b); in Europe (Faccio et al., 2001, Johnson et al., 2000a and Johnson et al., 2000b); in Hong Kong (Cheung et al., 2006); in Canada (Attig, 2007); in Germany (Gugler and Yurtoglu, 2003) and in France (Ginglinger and L’her, 2006). In Japan business groups (keiretsu) are not family-controlled; rather they are manager-dominated inter-corporate groups which Morck and Nakamura (2005) assert have provided a vehicle for management entrenchment. Managers of the most powerful firms within the keiretsu are in a position to transfer wealth from those with weaker ties to the business group. This can be accomplished by managers of the most strongly aligned firms occupying seats on the boards of weaker firms (Lincoln et al., 1996). Moreover, the promise of assistance if the firm should experience financial distress as well as the threat of withholding such aid could also prompt more weakly aligned firms to permit tunneling. The corporate elite of the keiretsu have strong government connections and wield considerable influence over policy (Morck and Nakamura, 2005), suggesting tolerance of profit tunneling. One of the advantages of business groups is the attribute of “mutual insurance”, the expectation that distressed firms will be propped up by partners that are more powerful. Early evidence (Hoshi et al., 1990) indicates that propping of distressed firms by keiretsu partners was efficient although newer work disputes this at a macro-economic level (Hoshi and Kashyap, 2004, Hoshi, 2006 and Morck and Nakamura, 2005). In India, Gopalan et al. (2007) find that propping up of distressed firms by group members through intra-group loans also enhances the ability of distressed firms to attract foreign capital. In Korea, however, Rousseau and Kim (2008) report that in the aftermath of the Asian crisis firms that were associated with chaebol suffered greater financial constraints than unaffiliated firms did. They ascribe this to the heightened market model orientation of the Korean economy in the post-crisis era. Thus, whether propping is beneficial or not is something of a puzzle. Bertrand and Mullainathan (2003) suggest that propping up of a distressed firm is a means of securing future tunneling. Others argue that propping perverts the distribution of resources of the internal capital market. In the Japanese context, propping could well be a repayment for the unsanctioned tunneling during stronger economic times. Riyanto and Toolsema (2008) argue that propping and tunneling must co-exist in pyramidal structures in order for firms to attract outside investors. Our evidence indicates that tunneling occurred during stronger economic times but when the Japanese economy slid into recession, strongly aligned firms propped up members of their business group. Indeed, some firms increased their adhesion to the horizontal keiretsu in the face of mounting financial constraints. For these firms, strengthened keiretsu affiliation permitted more rapid growth in assets. Since weak keiretsu affiliation is not synonymous with financial distress, the reversal of tunneling may be more compatible with the perspective that “negative tunneling” can secure future tunneling opportunities. Despite a substantive literature which addresses issues of business group affiliation in Japan (for a review see McGuire et al., 2009 and Morck and Nakamura, 2005 note that propping and tunneling within modern Japanese business groups have not been systematically investigated. Our study attempts to fill this gap. We proceed as follows: Section 2 contains an over-view of the economic and regulatory environment in Japan and includes a brief description of the two types of business groups present in Japan: horizontal and vertical keiretsu. Section 3 outlines data sources. In Section 4, we examine propping and tunneling in response to changing economic and regulatory conditions in Japan. Section 5 explores the role of the internal capital market in resolving tight credit market conditions. Conclusions follow in Section 6.

We investigate the functioning of Japanese business groups over the 1991–2001 period that was marked by significant economic and regulatory change. We examine two features of business groups (i) propping and tunneling and (ii) the role of the internal capital market. Recent work by Khanna and Yafeh (2007) examining business groups in emerging markets grapples with the issue of whether they are “paragons” or “parasites”. We find in Japan that more strongly affiliated keiretsu firms propped up weaker members during the recession, perhaps to preserve future tunneling opportunities. We detect changes in tie strength over time and find that the motivation behind increasing the degree of adhesion to the horizontal keiretsu lay in the goal of overcoming the financial constraints of the external capital market brought about by the severe Japanese recession. This appears to have the desired outcome of allowing keiretsu firms to continue capital expansion as well as positively impacting profitability. On balance, Japanese business groups seem neither to be complete “paragons” nor thorough “parasites”. Future research could examine specific sub-groups of firms that were financially distressed in order to ascertain whether “weak” firms or simply “weakly aligned” firms were propped up during the recession. This could shed light on whether propping is in the spirit of “mutual insurance” or is consistent with the darker view that propping occurs simply to facilitate future tunneling.