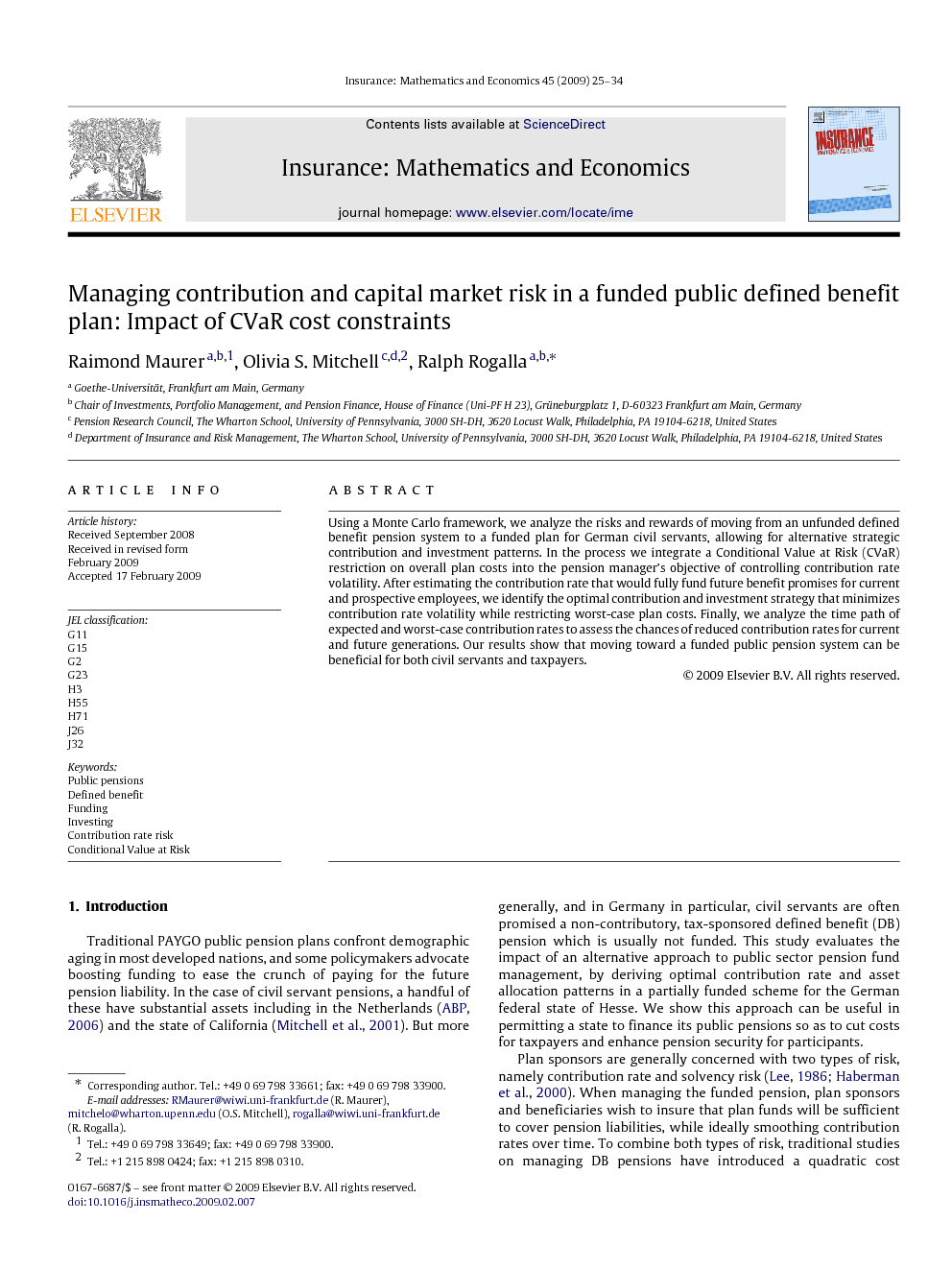 Using a Monte Carlo framework, we analyze the risks and rewards of moving from an unfunded defined benefit pension system to a funded plan for German civil servants, allowing for alternative strategic contribution and investment patterns. In the process we integrate a Conditional Value at Risk (CVaR) restriction on overall plan costs into the pension manager’s objective of controlling contribution rate volatility. After estimating the contribution rate that would fully fund future benefit promises for current and prospective employees, we identify the optimal contribution and investment strategy that minimizes contribution rate volatility while restricting worst-case plan costs. Finally, we analyze the time path of expected and worst-case contribution rates to assess the chances of reduced contribution rates for current and future generations. Our results show that moving toward a funded public pension system can be beneficial for both civil servants and taxpayers.

Traditional PAYGO public pension plans confront demographic aging in most developed nations, and some policymakers advocate boosting funding to ease the crunch of paying for the future pension liability. In the case of civil servant pensions, a handful of these have substantial assets including in the Netherlands (ABP, 2006) and the state of California (Mitchell et al., 2001). But more generally, and in Germany in particular, civil servants are often promised a non-contributory, tax-sponsored defined benefit (DB) pension which is usually not funded. This study evaluates the impact of an alternative approach to public sector pension fund management, by deriving optimal contribution rate and asset allocation patterns in a partially funded scheme for the German federal state of Hesse. We show this approach can be useful in permitting a state to finance its public pensions so as to cut costs for taxpayers and enhance pension security for participants. Plan sponsors are generally concerned with two types of risk, namely contribution rate and solvency risk (Lee, 1986 and Haberman et al., 2000). When managing the funded pension, plan sponsors and beneficiaries wish to insure that plan funds will be sufficient to cover pension liabilities, while ideally smoothing contribution rates over time. To combine both types of risk, traditional studies on managing DB pensions have introduced a quadratic cost criterion as the plan manager’s objective function (c.f. Haberman and Sung, 1994 and Haberman and Sung, 2005, Haberman, 1997a and Haberman, 1997b, Ngwira and Gerrard (2007) and Owadally and Haberman (2004)). These risks are typically measured by squared deviations of current contribution rates and funding levels from their expected or notional values.3 Another approach adopts a Conditional Value at Risk (CVaR) criterion as a key risk measure used for plan control: the CVaR of a parameter at the αα% confidence level is defined as the parameter’s expectation under the condition that its realization exceeds the Value at Risk (VaR) for that level (Artzner et al., 1997, Artzner et al., 1999 and Rockafellar and Uryasev, 2002). For instance, Bogentoft et al. (2001) include CVaR constraints on funding levels while seeking to minimize total costs of pension funding. Maurer et al., 2008a and Maurer et al., 2008b directly minimize the Conditional Value at Risk of total pension costs, while Haberman et al., 2003a and Haberman et al., 2003b investigate the trade-off between mean shortfall risk (i.e. CVaR on plan solvency) and excess contribution rate risk. In this paper, we identify contribution and investment strategies that minimize pension contribution rate risk (as in Haberman et al. (2000)), and we also impose CVaR restrictions on total plan costs appropriate to a public pension scheme.4 Focusing on the CVaR of the stochastic present value of plan costs offers an elegant and objective way to compare different intertemporal contribution and investment paths on a common basis. Moreover, this approach allows us to explicitly incorporate decisionmakers’ risk budget, by defining the maximum admissible CVaR of plan costs. We implement our approach in the context of German civil service pension plans. To date, only two German states have started funding a portion of their public pension liability, depositing 20%–40% of covered payroll to the active civil servants’ pension fund; these investments have been mainly restricted to government bonds. To illustrate the power of our model, we examine the Hessian public pension plan which we argue is rather representative of the public sector environment in Germany. We show that controlling only on costs requires a high regular contribution rate of about 40% of covered payroll. Conversely, focusing only on contribution rate volatility yields low regular contribution rates and low-risk asset allocations, but taxpayers are exposed to substantial risk of extraordinary but predictable transfers to cover shortfalls. Combining both approaches can produce moderate contribution rates accompanied by a substantial equity portfolio which generates acceptable contribution rate volatility while keeping total pension costs under control. In what follows, we briefly describe the public pension on which we focus, and we derive the value of plan liabilities and payroll-related contribution rates needed to finance them. Section 3 outlines the plan manager’s objective function and the model underlying the asset/liability management process. Results of our stochastic simulation study are detailed in Section 4. Section 5 concludes.

Most public pensions in the developed world are unfunded, noncontributory, and tax-sponsored defined benefit plans. These represent a substantial, and at present, mostly unrecognized liability to taxpayers, one which threatens to grow as the workforce ages. Against this backdrop, we evaluate ways to fund newly accrued pension benefits for the civil service pension of the German state of Hesse. This state runs a final salary-related DB plan that provides a replacement rate of about 1.8% of final pay per year of service (max. 71.75% after 40 years of employment) at retirement age, which is increasing to 67. We allow the plan manager to invest fund assets in the capital market, using strategic contribution and investment patterns that minimize contribution rate volatility while controlling for overall pension costs with respect to a CVaR cost constraint. We show that controlling only for costs results in high regular contribution rates, of about 40% of covered payroll. Controlling only on contribution rate volatility yields more moderate contribution rates and low-risk asset allocations, but high supplementary transfers to fill shortfalls. Combining both approaches results in moderate contribution rates paired with substantial equity holdings. While this study focuses on a particular pension plan design, our approach to plan control can easily be applied to any DB plan by simply adapting Eq. (1) so as to accommodate the desired benefit accrual function. Hence, our research should be of interest to policymakers across Europe and the Americas, inasmuch as many of their public sector plans face substantial funding shortfalls. Plan managers should also be interested, as we have proved under plausible assumptions that they can identify and implement a sensible balancing act between investment in equities and contribution policies, while protecting taxpayers from undue risk. A key message is that investing in pure bond portfolios, which represents the status quo investment policy for the handful of currently partially-funded German pension schemes, may not be the best way to exploit capital markets. Yet investing public pension money 60 % or more in equities, as is true for many US state pension plans, will prove too aggressive when future taxpayer consequences are properly accounted.