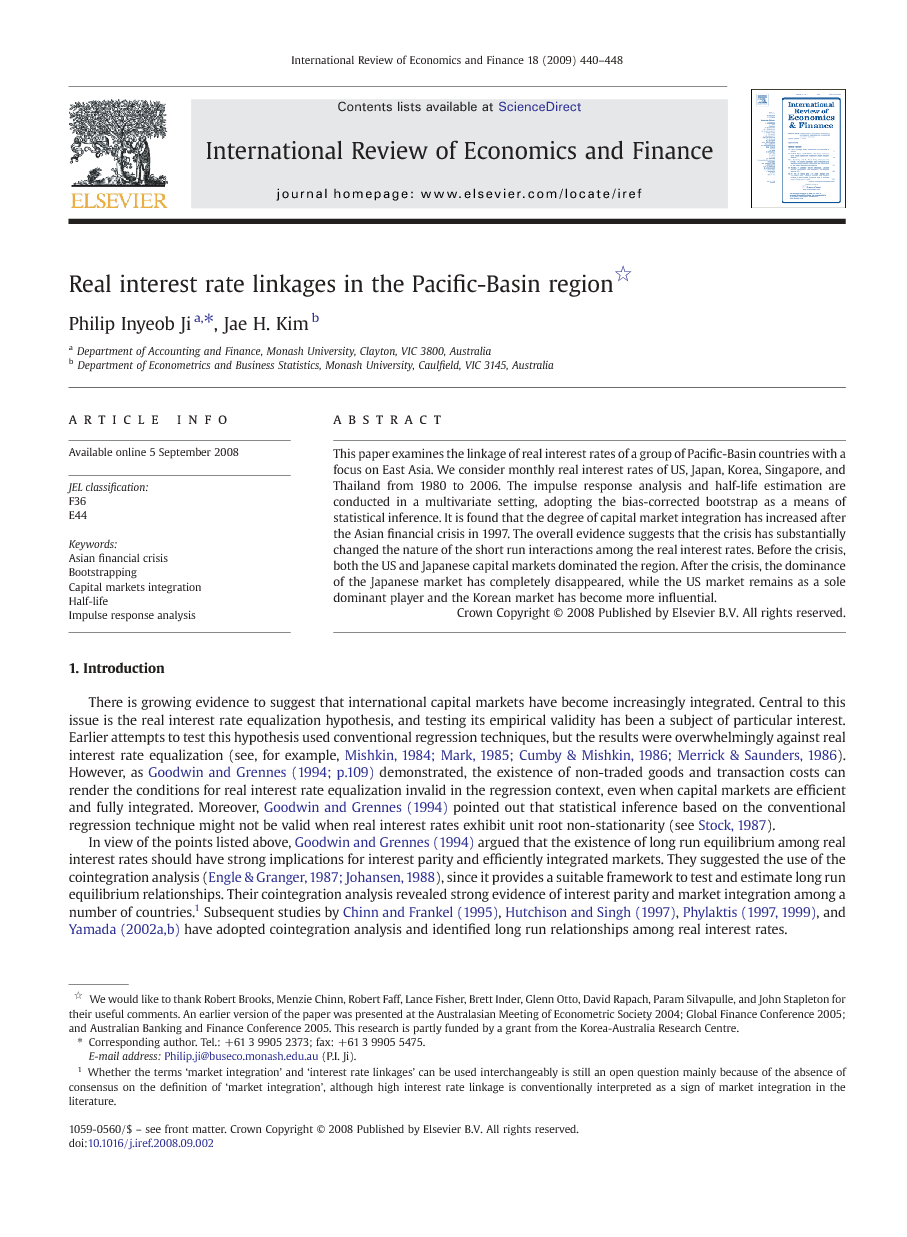 This paper examines the linkage of real interest rates of a group of Pacific-Basin countries with a focus on East Asia. We consider monthly real interest rates of US, Japan, Korea, Singapore, and Thailand from 1980 to 2006. The impulse response analysis and half-life estimation are conducted in a multivariate setting, adopting the bias-corrected bootstrap as a means of statistical inference. It is found that the degree of capital market integration has increased after the Asian financial crisis in 1997. The overall evidence suggests that the crisis has substantially changed the nature of the short run interactions among the real interest rates. Before the crisis, both the US and Japanese capital markets dominated the region. After the crisis, the dominance of the Japanese market has completely disappeared, while the US market remains as a sole dominant player and the Korean market has become more influential.

There is growing evidence to suggest that international capital markets have become increasingly integrated. Central to this issue is the real interest rate equalization hypothesis, and testing its empirical validity has been a subject of particular interest. Earlier attempts to test this hypothesis used conventional regression techniques, but the results were overwhelmingly against real interest rate equalization (see, for example, Mishkin, 1984, Mark, 1985, Cumby and Mishkin, 1986 and Merrick and Saunders, 1986). However, as Goodwin and Grennes (1994; p.109) demonstrated, the existence of non-traded goods and transaction costs can render the conditions for real interest rate equalization invalid in the regression context, even when capital markets are efficient and fully integrated. Moreover, Goodwin and Grennes (1994) pointed out that statistical inference based on the conventional regression technique might not be valid when real interest rates exhibit unit root non-stationarity (see Stock, 1987). In view of the points listed above, Goodwin and Grennes (1994) argued that the existence of long run equilibrium among real interest rates should have strong implications for interest parity and efficiently integrated markets. They suggested the use of the cointegration analysis (Engle and Granger, 1987 and Johansen, 1988), since it provides a suitable framework to test and estimate long run equilibrium relationships. Their cointegration analysis revealed strong evidence of interest parity and market integration among a number of countries.1 Subsequent studies by Chinn and Frankel (1995), Hutchison and Singh (1997), Phylaktis (1997, 1999), and Yamada, 2002a and Yamada, 2002b have adopted cointegration analysis and identified long run relationships among real interest rates. Given the existence of long run relationships among real interest rates, past studies have examined their short run interactions and attempted to determine which rate is leading others as a dominant force. Chinn and Frankel (1995) investigated the relative influence of US and Japanese real interest rates in the Pacific Rim region, where they presented evidence that most East Asian countries are linked with the US and Japan, forming another piece of the consensus in the literature that market integration has been increasing. They also found that the Japanese rate gained significant influence. Another notable example is Phylaktis (1999), who used impulse response analysis to examine the short run dynamics of the real interest rates of Pacific-Basin countries. She found an increasing degree of capital market integration after the financial market deregulation in the eighties. In addition, the US and Japanese capital markets were found to dominate the others, with the latter becoming increasingly more important. In this paper, we also examine the case of Pacific-Basin countries, with a focus on East Asian countries, using updated data and more sophisticated econometric methods. We consider three representative East Asian countries (Korea, Singapore and Thailand) along with the US and Japan, paying attention to the impact of the Asian financial crisis in 1997. We examine the existence of long run equilibrium relationships, short run dynamics and the issue of dominance among the real interest rates, before and after the crisis. As in Phylaktis (1999), we employ impulse response analysis based on the vector autoregressive (VAR) model. We also attempt to estimate half-lives of the real interest rates in the VAR context, as a measure of persistence. The half-life is defined as the number of periods required for the response of a time series, to its own shock, to be halved. It can be readily estimated from the impulse response function of a time series to its own shock. If a time series in a cointegrated VAR model is found to be mean-averting in the sense that it shows a permanent response to its own shock, it should be associated with a common trend (or a zero eigenvalue) of the system. It can also be regarded as a dominant force, since it acts as a driving force to the other integrated time series that show mean-reverting behaviour to their respective own shocks. In order to conduct improved statistical inference for the impulse response analysis and half-life estimation, we resort to confidence intervals based on the bootstrap method (Efron, 1979). Bootstrap inference is useful in small samples, especially when the data is non-normal or heteroskedastic, where conventional asymptotic inference based on a normal approximation may perform poorly. In addition, small sample biases of VAR parameter estimators (see, for example, Pope, 1990) can further undermine the reliability of the asymptotic method. In this paper, we use the bias-corrected bootstrap confidence interval of Kilian, 1998a and Kilian, 1998b.2 It has been found to exhibit much better small sample properties than conventional confidence intervals, especially for VAR models whose characteristic roots are close or equal to one. It can be made applicable to VAR models with non-normal or heteroskedastic innovations using the wild bootstrap of Mammen (1993). The main finding of the paper is that the degree of capital market integration of Pacific-Basin countries has increased after the Asian financial crisis. The crisis also has changed the nature of short run dynamics among real interest rates. In particular, the dominance of Japan in this region appears to be a purely pre-crisis phenomenon, while the US maintains a strong dominance even after the crisis. In the next section, we discuss the data details and the results of the preliminary analysis. Section 3 provides a summary of the methodologies used in the paper. Section 4 presents the empirical results, and Section 5 concludes the paper.

This paper examines the short run and long run relationships among the real interest rates of several Pacific-Basin countries with a focus on East Asia, paying attention to the impact of the Asian financial crisis. We have used monthly data for the US, Japan, Korea, Singapore, and Thailand from 1980 to 2006. We are concerned with the degree of capital market integration and the nature of short run dynamics. To investigate these issues, we adopt Johansen's (1988) cointegration test and impulse response analysis based on the unrestricted VAR model. We also have estimated the half-lives of the real interest rates to measure the persistence of real interest rates. For statistical inference on impulse response analysis and half-life estimation, we use the bias-corrected wild bootstrap. It is found that a selected group of capital markets in the Pacific-Basin region are highly integrated. The degree of integration has become stronger after the crisis in 1997. Rich dynamic interactions are observed from the impulse response analysis. Before the crisis, the US rate affects the Singaporean and Thai rates, while the Japanese rate affects the Korean rate. After the crisis, the US rate affects Singaporean rates, while the Japanese rate no longer exhibits any short-term influence on the other rates at all. In contrast, we have found some evidence that the role of the Korean market has become more important after the crisis. The half-life estimation also reveals interesting features in relation to persistence in the real interest rates. Before the crisis, the US and Japanese rates show the degree of persistence equivalent to a unit root time series, while the others show strong mean-reversion. After the crisis, however, the US rate is the only time series that shows the degree of persistence of a unit root time series, while the others including the Japanese rate are highly mean-reverting. This indicates that the US and Japan were the two dominant capital markets in this region before the crisis, while the US capital market dominates the region after the crisis.