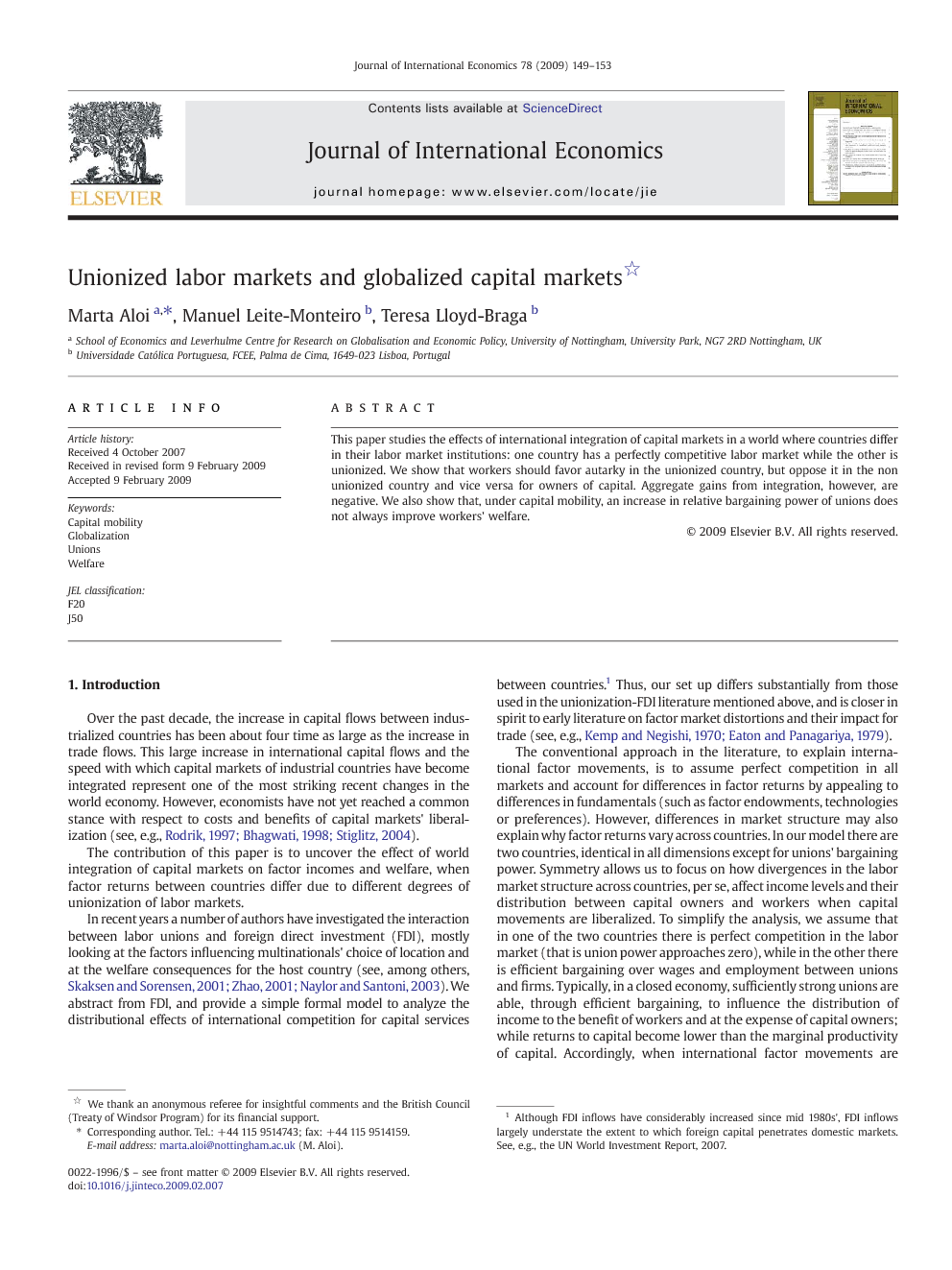 This paper studies the effects of international integration of capital markets in a world where countries differ in their labor market institutions: one country has a perfectly competitive labor market while the other is unionized. We show that workers should favor autarky in the unionized country, but oppose it in the non unionized country and vice versa for owners of capital. Aggregate gains from integration, however, are negative. We also show that, under capital mobility, an increase in relative bargaining power of unions does not always improve workers' welfare.

Over the past decade, the increase in capital flows between industrialized countries has been about four time as large as the increase in trade flows. This large increase in international capital flows and the speed with which capital markets of industrial countries have become integrated represent one of the most striking recent changes in the world economy. However, economists have not yet reached a common stance with respect to costs and benefits of capital markets' liberalization (see, e.g., Rodrik, 1997, Bhagwati, 1998 and Stiglitz, 2004). The contribution of this paper is to uncover the effect of world integration of capital markets on factor incomes and welfare, when factor returns between countries differ due to different degrees of unionization of labor markets. In recent years a number of authors have investigated the interaction between labor unions and foreign direct investment (FDI), mostly looking at the factors influencing multinationals' choice of location and at the welfare consequences for the host country (see, among others, Skaksen and Sorensen, 2001, Zhao, 2001 and Naylor and Santoni, 2003). We abstract from FDI, and provide a simple formal model to analyze the distributional effects of international competition for capital services between countries.1 Thus, our set up differs substantially from those used in the unionization-FDI literature mentioned above, and is closer in spirit to early literature on factor market distortions and their impact for trade (see, e.g., Kemp and Negishi, 1970 and Eaton and Panagariya, 1979). The conventional approach in the literature, to explain international factor movements, is to assume perfect competition in all markets and account for differences in factor returns by appealing to differences in fundamentals (such as factor endowments, technologies or preferences). However, differences in market structure may also explain why factor returns vary across countries. In our model there are two countries, identical in all dimensions except for unions' bargaining power. Symmetry allows us to focus on how divergences in the labor market structure across countries, per se, affect income levels and their distribution between capital owners and workers when capital movements are liberalized. To simplify the analysis, we assume that in one of the two countries there is perfect competition in the labor market (that is union power approaches zero), while in the other there is efficient bargaining over wages and employment between unions and firms. Typically, in a closed economy, sufficiently strong unions are able, through efficient bargaining, to influence the distribution of income to the benefit of workers and at the expense of capital owners; while returns to capital become lower than the marginal productivity of capital. Accordingly, when international factor movements are liberalized, capital flows from the highly unionized country into the less unionized country (in our case, to the perfectly competitive country): in the unionized country output and workers' income decrease while capitalists' income increases, and vice versa in the non unionized country. With fixed factors' supply and full employment, unions are not able to influence resource allocation at the autarkic equilibrium, and given that both countries have the same endowments and technology, the marginal productivity of capital is identical across countries. Hence, allocation of capital across countries is efficient under autarky. Allowing for capital mobility triggers inefficient capital flows and leads to a decrease in world output. Also, workers' share of world output and income per capita at the world level decrease. Therefore, international capital mobility would not benefit workers, even if the gains obtained by capital owners were efficiently redistributed among all individuals, both at the world level and in the unionized country. The paper also addresses the issue of the desirable level of union bargaining power when capital is internationally mobile. It is shown that there is a critical level of union power above which an increase in union strength reduces union members' income. These second best results are at odds with the prediction of standard models in which capital mobility leads to overall welfare gains, and may explain unions' resistance towards globalization in a world with disparate workers' bargaining strength. Interestingly, the same effects would occur if we assume perfectly competitive labor markets and a redistributive capital tax, since in our set up the degree of unionization can be interpreted as a tax on capital returns. Hence, our work can also be related to the literature on tax competition, redistribution and capital mobility (see, e.g., Cremer et al., 1996 and Wilson and Wildasin, 2004). The remainder of the paper is as follows. In Section 2 we present the model. In Section 3 we contrast autarky and perfect capital mobility. In Section 4 we explore the effects of capital movements, and Section 5 concludes.

Labor unions fear international markets' liberalization, their main concern being that workers of the trading partner countries should be granted essential rights, preferably similar to those enjoyed by home workers. They claim that this is aimed at benefiting all workers, the struggle being between workers and capital owners around the world and not between workers from different countries. By contrast, many of those who are in favor of liberalization of world economic transactions claim that unions aim merely at protecting their members against competition from workers of less regulated countries. Our work shed some light on these issues and provide arguments on both sides of the debate. We have shown that, if one country is unionized (with efficient bargaining over wages and employment) while the other is not, then, world output, workers' share of world income and income of unionized workers are higher under autarky, whereas workers from the non unionized country benefit from capital movement liberalization. With capital internationally mobile, however, if the non unionized country were to converge to the same degree of unionization of the other country no factor movements would occur at equilibrium; hence output would not be reduced and workers of the unionized country would not lose from liberalization. Accordingly, for workers in unionized countries, it may make sense to push towards achieving, prior to integration, similar levels of bargaining strength around the world. In contrast, under asymmetric unionization and integrated capital markets, if workers' bargaining strength in the unionized country is relatively high, a reduction in union power actually benefits union members, as it limits the size of capital flows out of the unionized country and its negative effects on workers' income. Finally, let us remark that, to simplify the analysis and to establish a first set of relevant results, we have abstracted from considering unemployment. Our conjecture is that the existence of unemployment in the unionized country would reinforce the outflows of capital; the marginal productivity of capital in the unionized country would be lower and, thereby, the differential in capital return across countries would be higher. However, the final effects on factor returns, employment and output may depend on the way unemployment is generated and on the way unions and bargaining is modelled. These issues are left for future research.