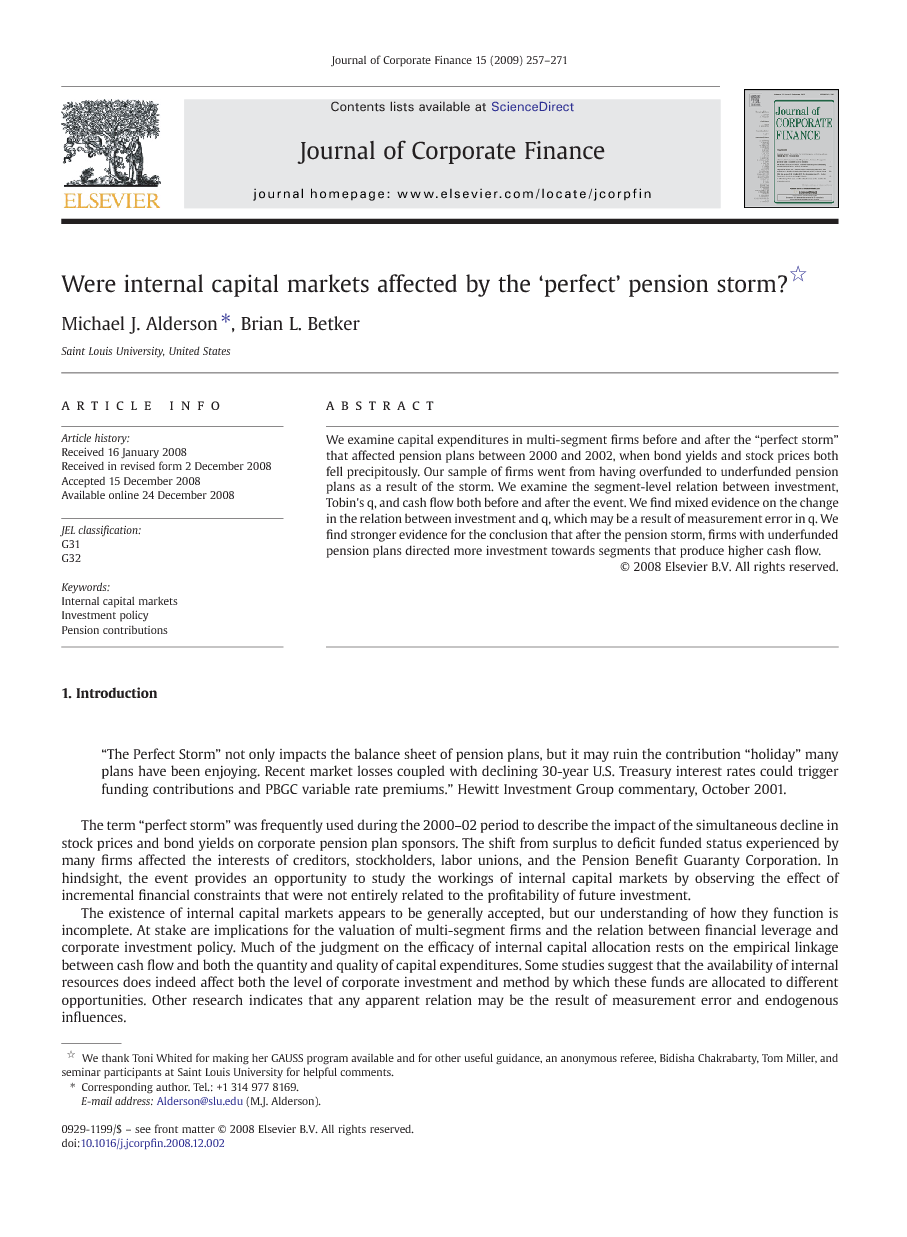 We examine capital expenditures in multi-segment firms before and after the “perfect storm” that affected pension plans between 2000 and 2002, when bond yields and stock prices both fell precipitously. Our sample of firms went from having overfunded to underfunded pension plans as a result of the storm. We examine the segment-level relation between investment, Tobin's q, and cash flow both before and after the event. We find mixed evidence on the change in the relation between investment and q, which may be a result of measurement error in q. We find stronger evidence for the conclusion that after the pension storm, firms with underfunded pension plans directed more investment towards segments that produce higher cash flow.

Peyer and Shivdasani (2001) document the existence of distortion costs following leveraged recapitalizations. Those costs, incurred in the form of suboptimal investment allocation, may represent an indirect cost of financial distress. However, over 80% of the sample firms studied by Peyer and Shivdasani encountered some degree of interest from the market for corporate control. As such, the indirect costs of leverage that they identified may be endogenous, in the sense that these are generated by the same deficiencies in managerial quality that attracted the attention of outsiders and not by high leverage. In other words, a sample of companies that conducted leveraged recaps could include a large number of “bad” managers who may have continued to generate managerial discretion costs, albeit at a lower level following the event. We therefore examine a broader sample of firms in an attempt to determine the existence of these indirect costs, whereby managers favor high cash flow, as opposed to high value, investment opportunities. The source of increased financial constraints in our study comes from higher required pension contributions. Those constraints have been shown by Rauh (2006) to lead to reduced capital expenditures. The analysis here is positioned at the intersection of two prior studies in that the catalyst is an external shock (Lamont, 1997) and pension contributions are the financial constraint (Rauh, 2006). Lamont shows that externally imposed financial constraints appear to reduce capital expenditures. Rauh demonstrates that capital expenditures are sensitive to changes in mandatory pension contributions. Our study examines how the allocational efficiency of investment is affected when an external shock causes pension contributions to increase sharply. We find mixed evidence on the relation between segment investment and Tobin's q before and after the pension storm. OLS regressions indicate that investment is positively related to segment q before the storm, but negatively related to q after the storm. However, a sample of firms that stayed in pension surplus after the storm evinces the same relationship. Moreover, when we apply the Erickson and Whited (2002) method, which corrects for measurement error in q, we find no relation between segment q and investment before or after the storm for the reversal sample. In contrast, firms that stayed in pension surplus show a positive relation between segment q and investment both before and after the storm when the Erickson–Whited method is used. The results on segment cash flow and investment are clearer. Prior to the storm, both samples invested less in segments that produced greater cash flow. After the storm, firms that went into deficit status invested more heavily in these segments, while firms that stayed in surplus maintained their pre-storm behavior. Our results add to the evidence that a tightening of financial constraints can lead a firm to emphasize investments that maximize cash flow. We also add to the evidence that suggests that when Tobin's q is measured with error, detecting a reliable relation between q and investment is difficult. This article strengthens the case for viewing a defined benefit pension plan as a component of the internal capital market by showing that the quality of corporate investment, in addition to the quantity (Rauh, 2006), is also influenced by more stringent pension funding requirements.