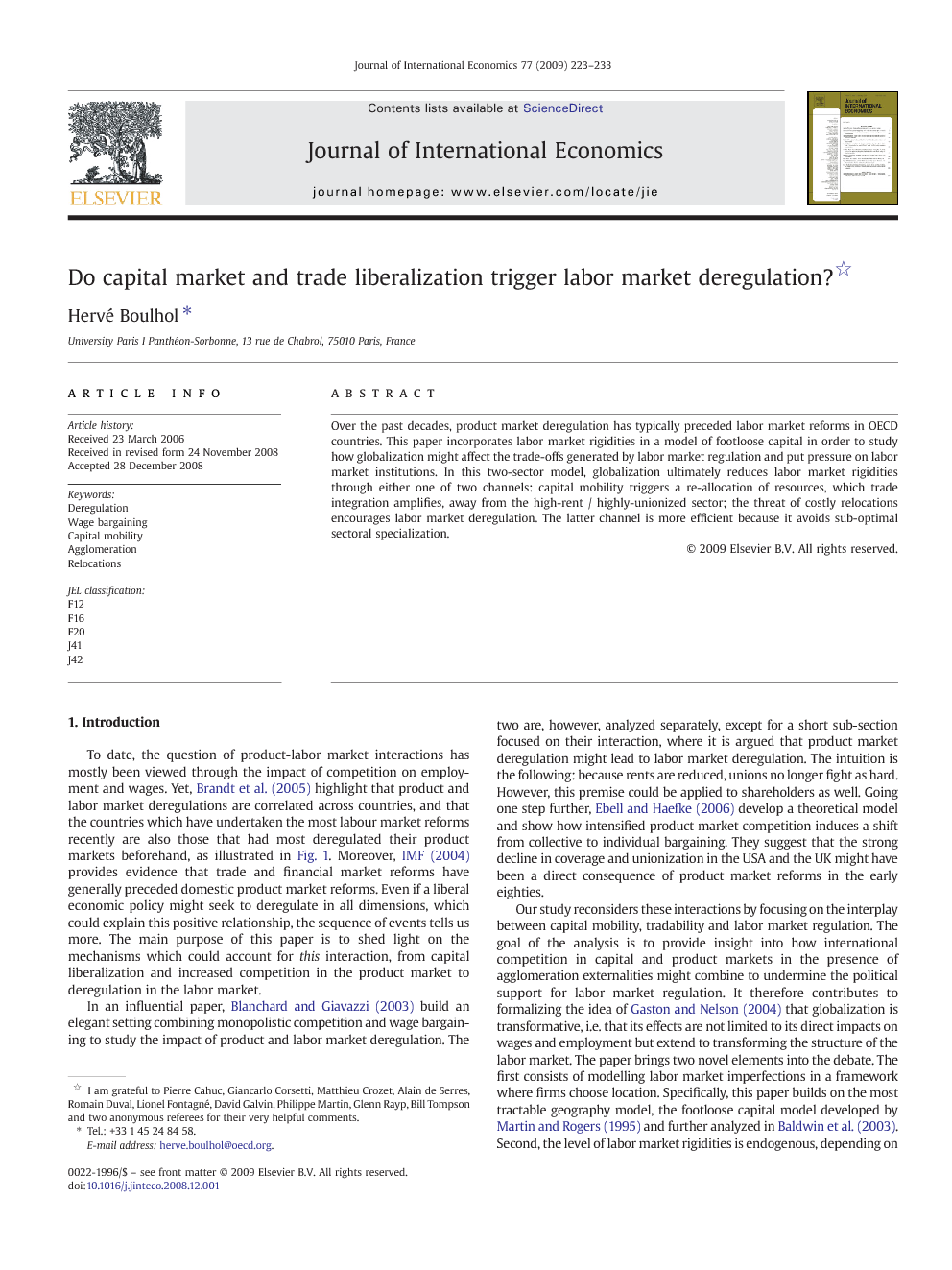 This paper deepens the analysis of product-labor market interactions by providing insight into how capital mobility and trade liberalization might affect the trade-offs created by labor market regulation. Regulation has distributive implications by enabling incumbent workers to capture a bigger part of the product market rents at the expense of capital owners. In addition, because the size of the rents differs across sectors, labor market regulation generates segmented labor markets, and may alter the allocation of resources between sectors. This paper shows how globalization might enhance the allocative effect of regulation leading to a distorted specialization if the labor market remains highly regulated, while reducing the scope of the distributive effect. When capital is mobile internationally, firms seeking higher returns to capital move to the low-regulation country. As they relocate abroad, the high-regulation country specializes in the low-rent sector, leading to a reduction of the domestic rents captured by workers. Labor market dualism is therefore de facto reduced and so is unemployment. However, globalization might reduce labor market rigidities through another channel, namely by triggering labor market deregulation. In our model, importing the “delocalized” good has an adverse effect on the purchasing power of domestic consumers. Consequently, beyond a certain threshold, labor market regulation becomes ineffective in securing high real wages due to firms' relocations. Because trade liberalization increases the attractiveness of relocations, as it becomes cheaper to supply also the domestic market from abroad, this threshold is negatively related to the degree of trade liberalization. When trade integration extends beyond a certain level, the only outcome of any marginal regulation is to make the imported goods more expensive, leading to an inferior equilibrium. In this context, the optimal choice is to deregulate the labor market totally whatever the social preferences or political support for labor market regulation. The threat of relocations, which becomes more credible when trade costs are low, drives such changes in labor market institutions. Finally, this study suggests that countries considering the liberalization of capital and trade flows should take into account the labor market deregulation that such liberalization is likely to trigger. Otherwise, countries that attach importance to labor market regulation may face a difficult situation once they are engaged in the liberalization process. From a political economy perspective, the model conveys two additional messages. For a government that is eager to liberalize on all fronts, an attractive option is to start with capital markets. This would provide support for trade openness, as the combination of capital mobility and relatively stringent labor market regulation induces capital outflows, and makes trade protection costly due to the inefficient induced specialization in low-rent sectors. Finally, incumbent workers would then opt for labor market deregulation, as such regulation becomes increasingly ineffective due to high-rent sectors relocating abroad. Conversely, if unions facing capital and trade liberalization want to maintain a significant level of labor market regulation, they might have to cooperate internationally.