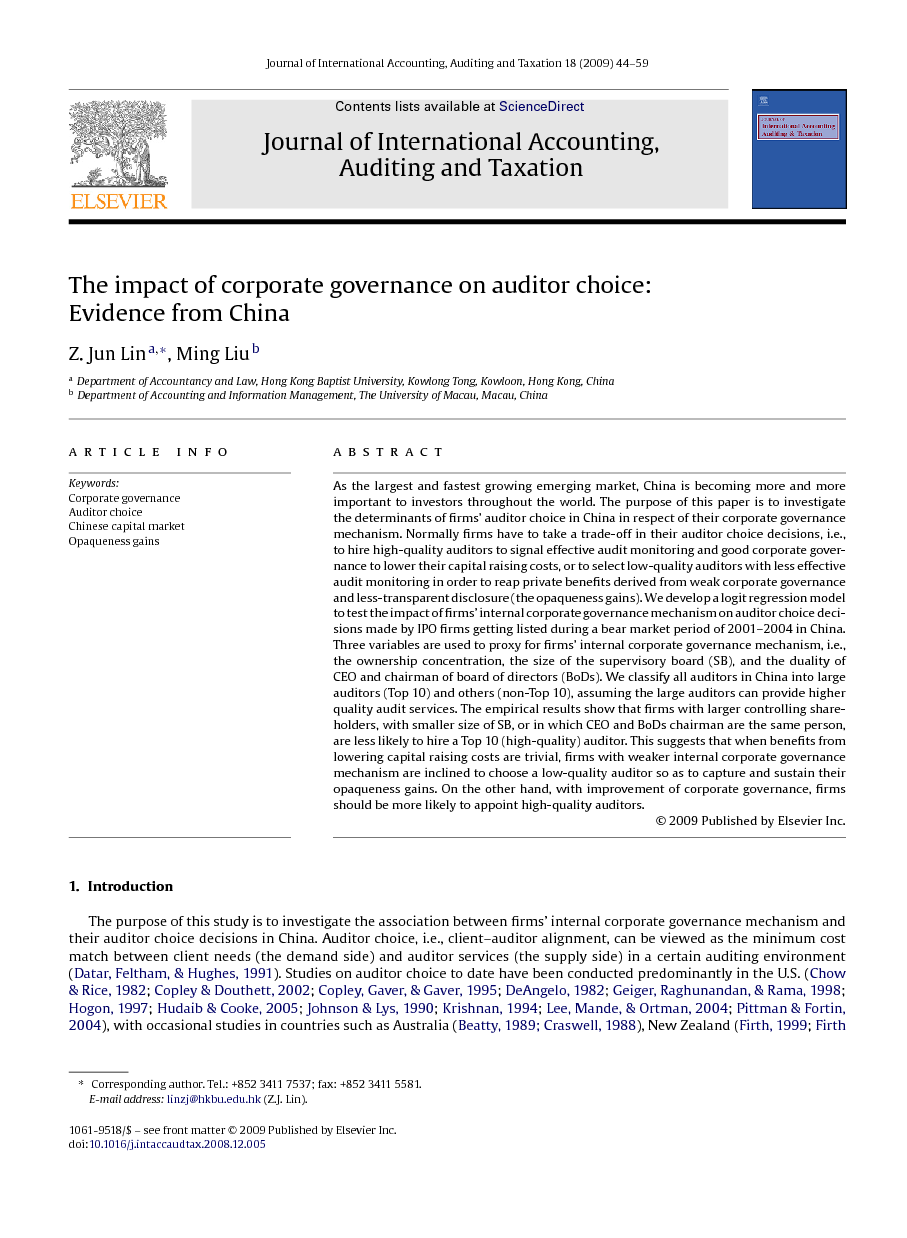 The purpose of this study is to investigate the association between firms’ internal corporate governance mechanisms and their auditor choice decisions in the Chinese context. Three variables are used to proxy for firms’ internal corporate governance mechanism, i.e., the shareholding proportion of the controlling owner, the size of the SB, and the duality of CEO and BoD chairman positions. We categorize Chinese auditors into two groups, Top 10 (high-quality) and non-Top 10, according to the ranking of their annual revenues as publicized by CICPA. Through logit regression, we identify the impact of the three internal corporate governance variables on the audit choice decisions undertaken by the IPO firms being listed in China during 2001–2004. The empirical results support all three hypotheses used to test the determinants of the firms’ auditor choice decisions. Firms with larger controlling owners, with smaller SB size, and in which the positions of CEO and BoD chairman are held by the same person, are less likely to hire high-quality (Top 10) auditors. The findings may suggest that, when stocks or equity rights reissuing is unlikely, listed firms with large controlling owners may be less enthusiastic in improving corporate governance. Capitalization of the opaqueness gains derived from weak corporate governance mechanisms then dominate firms’ auditor choice decisions. The listed firms may be inclined to choose auditors of low quality to maintain their opaqueness gains. Firms with weaker internal corporate governance mechanism are more likely to choose a low-quality auditor since they have more opaqueness gains to protect. Thus the effectiveness of audit monitoring is positively affected by the quality of firms’ corporate governance practices in China. The study findings may generate implications for the stakeholders of the Chinese listed firms, especially the investors and market regulators. It is not a good practice for listed firms with weak internal corporate governance mechanisms to choose low-quality auditors. In so doing, the controlling shareholders of the listed firms can easily capture private benefits from exploiting small shareholders. To bolster the confidence of the market participants, the Chinese government should promote the reform of corporate governance of the listed firms, enforce an effective functioning of the SB as well as independent non-executive directors or an auditing committee system to further improve firms’ internal and external monitoring mechanisms, and enhance the transparency and information credibility of the listed firms. At the same time, the Chinese market regulators must enhance the surveillance of the behaviors of the controlling shareholders and the quality of corporate reporting and auditing processes to curb listed firms from seizing self-benefits or the opaqueness gains by avoiding high-quality audit monitoring, and to protect the interest of all investors. As a result, the auditing profession and the stock market should be able to develop smoothly in China. It is worthwhile to point out that the stock market and auditing environment in China have some distinct features compared to most developed countries. For instance, there is a dominant portion of non-tradable state-owned equity shares for Chinese listed firms and the government exercises substantial control over the operations of the listed firms. In addition, the auditing profession is directly regulated by the government and the utility of auditing services may not be fully realized in a relatively less efficient capital market in China. Thus one should be careful when interpreting the results of this study, in particular, the effects of different environmental factors should be taken into account when comparing auditing practices in China to the developed countries. Nonetheless, in line with the continuing progress of the economic reforms and business restructuring, the Chinese accounting and auditing practices have moved towards internationalization rapidly in recent years. The Chinese experience involving auditor choice decisions should be relevant to the development of the independent audit function in other developing countries. There are some limitations in this study. First, more rigorous results may be derived from more sophisticated simultaneous equation methods for the auditor choice tests. Prior studies (Copley & Douthett, 2002; Feltham et al., 1991) suggest that auditor choice research should consider both the demand and the supply sides of audit services. Simultaneous equation methods could be used to control both the demand and the supply effects of audit services. However, as many Chinese listed firms do not disclose the audit fee information (a key variable to proxy for the supply effect in the audit market), controlling for the supply side effects in the regression is difficult at present. Second, the size of the SB may not be a good proxy for internal corporate governance mechanisms since many SB members are from inside the firms. The testing result may be more convincing if we include the variables about the numbers and expertise of independent non-executive directors and the characteristics of audit committee (i.e., its composition, member expertise, and activities) in the regression. Although data about the more recent practices of independent non-executive directors and audit committee characteristics are not available for our testing period, they could be incorporated into regression models with extended testing period in future studies. In addition, we used the size of auditing firms to differentiate between high- or low-quality auditors. There are other variables employed as alternative indicators of auditor quality in the literature, which could also be used to examine the determinants of auditor choice decisions. Finally, although government agencies (including parent SOEs) have dominant shares of equity in most Chinese listed firms, some non-government controlled or privately owned firms have gotten listed in the market in recent years. The demands or expectations of these firms for the quality of auditing may differ from the listed firms with dominant state-owned equity shares, which should merit further study in the future.