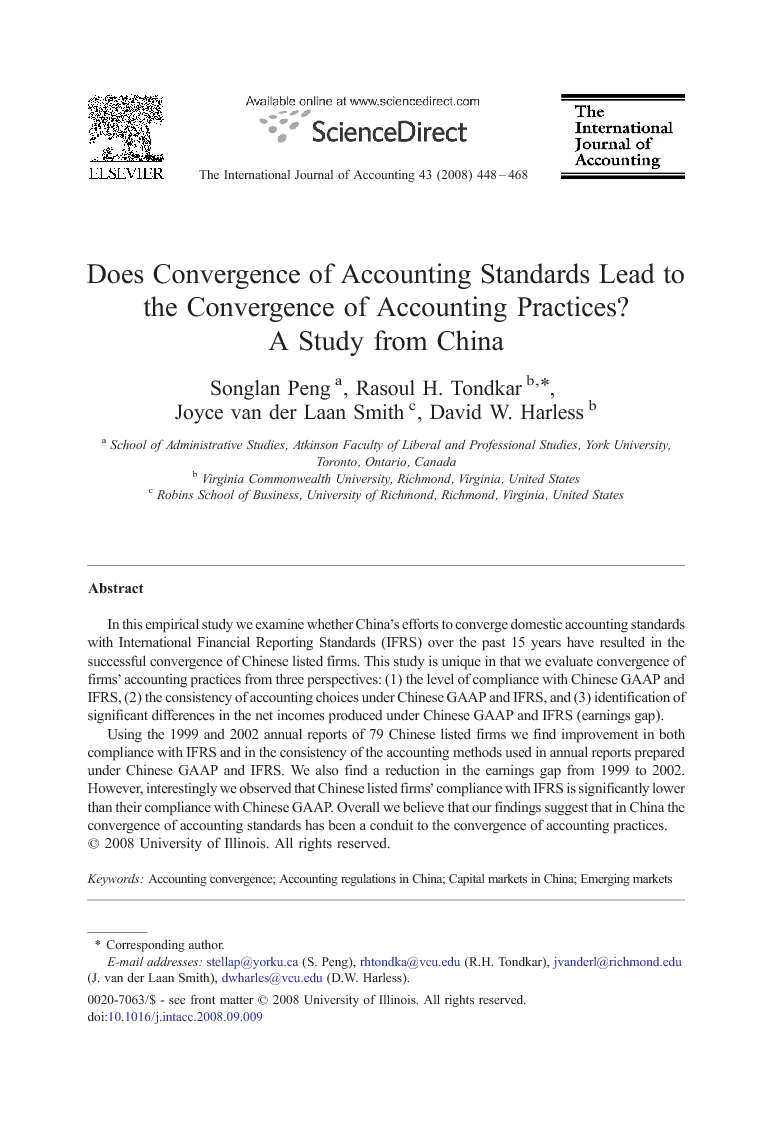 The primary objective of the International Accounting Standard Board (IASB) is to develop a single set of high quality accounting standards for use in global financial reporting. To this end, the IASB and its predecessor have issued 41 International Accounting Standards (IAS) and seven International Financial Reporting Standards (IFRS).1 As an integral part of its objective the IASB promotes the convergence of national accounting standards and IFRS. The IASB's efforts have resulted in the adoption of IFRS by a considerable number of countries. Among the 99 countries that have either adopted or permitted the use of IFRS for domestic listed companies as of August 2005, 80% are from emerging capital markets (Deloitte & Touche, 2005). Along with the IASB's success, however, there is concern that the convergence of accounting standards may not lead to the convergence of accounting practices if firms do not comply with the standards (Street et al., 1999 and Street and Bryant, 2000). This concern is accentuated in emerging market economies that may not have the accountants, auditors, and regulators to support compliance. As pointed out by Eccher and Healy, the standards developed by the IASB are “primarily based on those for countries with highly developed capital markets… It is questionable whether such standards are also optimal for developing and transitional economies that lack the infrastructure for monitoring managers' financial reporting decisions” (p. 1). In this empirical study we use China — as a case of an emerging market economy — to examine whether its efforts to converge domestic standards with IFRS over the last 15 years have been successful, i.e., do Chinese listed firms' accounting practices converge with IFRS? China provides a clear opportunity to evaluate the convergence debate. Since 1992, China has issued four sets of accounting regulations (1992, 1998, 2001, and 2006); each replaced the previous one and was considered to be in greater conformity with IFRS (Chen et al., 2002, Pacter and Yuen, 2001, March and International Accounting Standards Board (IASB), 2006, February 15). It has been noted in the literature and by the IASB that impressive progress has been made toward the convergence of Chinese accounting standards with IFRS (International Accounting Standards Board (IASB), 2005, November 14 and Xiang, 1998). However, Chen, Gul, and Su (1999) and Chen et al. (2002) find that there is a significant difference in both 1992 and 1998 between Chinese GAAP and IFRS-based net incomes of Chinese listed firms. Our study extends Chen et al. (2002) by evaluating the level of and the improvement in the convergence of Chinese listed firms' accounting practices with IFRS since promulgation of the 2001 Chinese GAAP. In addition, this study contributes to the literature by evaluating the convergence of accounting practices using three evaluation methods: (1) the level of a firm's compliance with accounting regulations, (2) the consistency of firms' accounting choices under two sets of accounting regulations, and (3) whether the net incomes produced by the same firm under different sets of accounting standards are comparable. Each of these methods evaluates different aspects of convergence. No previous study has integrated these three approaches, most likely due to the difficulty in obtaining suitable sample firms. We are able to study these evaluation methods because of China's unique market segmentation which requires certain firms, those that issue both A and B-shares, to issue two sets of annual reports, one based on Chinese GAAP and the other based on IFRS. We find that China's efforts to converge Chinese accounting standards with IFRS have been successful in the convergence of Chinese firms' accounting practices with IFRS. We also find that the convergence of accounting practices in China has occurred progressively as evidenced by the improvement in convergence with the issuance of Chinese GAAP in 2001. Although these findings are specific to China, they should also be of interest to regulators in other developing capital markets who seek to improve financial reporting through convergence of their standards with IFRS. Regulators in these countries face many of the same obstacles encountered by China, such as lack of accounting professionals, insufficient resources for regulation and enforcement, and questionable practices of local auditors. The remainder of this paper is organized as follows: Section II provides the background and Section III presents prior research and hypotheses development. Section IV discusses the research design. Section V presents the results and Section VI provides a summary of the study.

In this study we examine whether China's efforts over the last 15 years to converge domestic standards with IFRS have been successful in the convergence of Chinese listed firms' accounting practices with IFRS. We use three evaluation methods: the compliance index, the consistency index, and the index of comparability to assess the level of convergence of accounting practices. Our analysis is based on the 1999 and 2002 annual reports of listed firms that are required to follow both Chinese GAAP and IFRS (A- and B-share issuers). We find significant (p < 0.001) improvement in IFRS compliance from 1999 to 2002. While this finding supports H1, interestingly we do not find the same level of compliance with IFRS in either year. Mean IFRS compliance indices were 0.857 and 0.900 for the 1999 and 2002 annual reports, respectively, while mean Chinese GAAP compliance indices were.970 and .969, in 1999 and 2002, respectively. Consistent with this observation we also found that firms' compliance with Chinese GAAP is significantly higher (p < 0.001) than their compliance with IFRS in both 1999 and 2002. Evaluation and testing of the consistency indices reveal a significant improvement (p < 0.001), in 2002 as compared to 1999, in the consistency of accounting treatments between Chinese GAAP and IFRS-based annual reports. However, full consistency has not been achieved. Analysis of the index of comparability reveals an earnings gap between the net income numbers reported in Chinese and IFRS-based annual reports in 1999. This study extends the study by Chen et al. (2002). We extended Chen et al. (2002) and evaluate the effect of convergence of Chinese GAAP with IFRS with the issuance of 2001 Chinese GAAP and find a significant (p < 0.001) reduction in the earnings gap between firms' Chinese and IFRS-based net incomes in 2002 relative to 1999 annual reports. Overall, we believe that the significant improvements we observe in the compliance, consistency, and comparability indices from 1999 to 2002 provide evidence that the convergence of Chinese GAAP with IFRS result in firms' accounting practices converging with IFRS. Certain limitations should be considered. One limitation is the subjectivity inherent in the selection of the accounting measurement treatments included in the measurement instrument, as well as during the data collection process. Another limitation of the study is the small sample size. Only 79 firms are investigated. Although they represent all firms that issue both A- and B-shares, generalization of results to firms that issue A-shares only may not be possible. Finally, this study is subject to the limitation of certain firms' nondisclosures. Notwithstanding these limitations, the findings of this study contribute to the convergence literature and may be of interest to regulators in emerging capital markets.