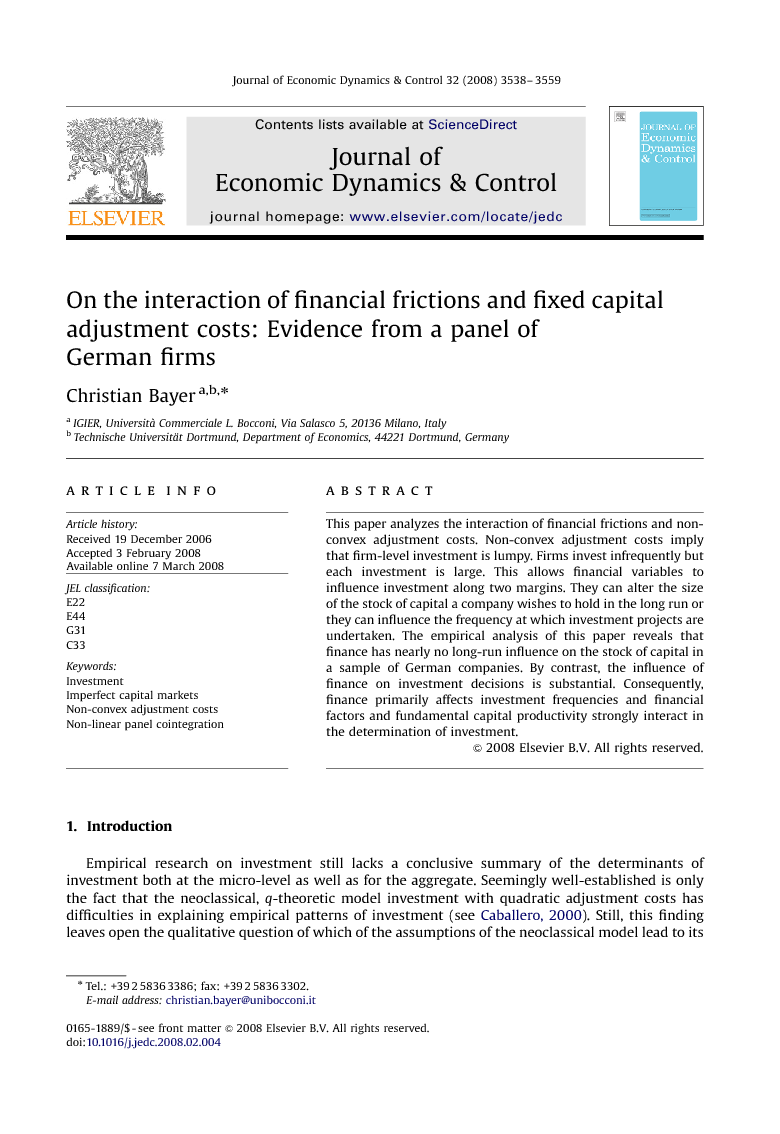 This paper analyzes the interaction of financial frictions and non-convex adjustment costs. Non-convex adjustment costs imply that firm-level investment is lumpy. Firms invest infrequently but each investment is large. This allows financial variables to influence investment along two margins. They can alter the size of the stock of capital a company wishes to hold in the long run or they can influence the frequency at which investment projects are undertaken. The empirical analysis of this paper reveals that finance has nearly no long-run influence on the stock of capital in a sample of German companies. By contrast, the influence of finance on investment decisions is substantial. Consequently, finance primarily affects investment frequencies and financial factors and fundamental capital productivity strongly interact in the determination of investment.

In this paper the interaction of fixed capital adjustment costs and financial frictions was studied empirically. To do so, a proxy for the profitability of investment was obtained. This proxy explicitly accounted for the technological heterogeneity of firms across sectors. Since capital profitability follows an I(1) process in the analyzed sample and is cointegrated with capital, we have performed a two step non-linear cointegration analysis for capital and investment. From the estimation of the long-term relation, we found that finance is hardly correlated with the choice of capital. Accordingly, the Modigliani–Miller theorem holds, or more precisely, cannot be rejected from a long-term perspective. Plainly speaking, finance does not matter for long-term capital holdings. However, the picture changes substantially if the effect of finance on investment decisions is analyzed taking a short-term perspective. Being more equity financed starkly increases the speed of adjustment of capital to its equilibrium level. In summary, the results for the long- and short-run imply that financial considerations primarily have intertemporal substitution effects for investment. Firms endowed with more financial means do not invest more, but they invest more often and in smaller amounts than firms which have lesser financial means. Figuratively speaking, finance is the grease but not the fuel of investment. However, we need to take into account that most firms in our sample are relatively large, established, publicly listed firms. A priori we would not expect these firms to suffer from substantial (agency) costs of finance in the long run. For a more representative sample of firms the overall picture may differ. The findings of our analysis obviously hinge on the quality of the proxy used for capital profitability and later for mandated investment. The derived measure of mandated investment (gap) can explain a significant fraction of the variation in investment. This suggests that the proxy can be considered as reasonable. Moreover, the econometric issues raised by Cooper and Willis (2004) do not apply to our data either because we find capital profitability to be non-stationary. Therefore, the differences in adjustment speeds at high and low levels of mandated investment can be interpreted structurally as evidence for non-convex adjustment costs, reconfirming our a priori assumption. In particular, we can interpret them structurally, as the differences are not only econometrically but also economically significant. This raises the question of what is to be structurally concluded from our results with respect to economic primitives particularly for finance. Although the estimation technique of the present paper does not recover the parameters of economic primitives themselves, such as the adjustment cost function, and hence does not allow us to draw strong structural conclusions directly, some economic structures are more compatible with our results than others. We find that finance primarily influences the adjustment speed but not the level of the stock of capital, for example. This does not lend much support – at least on an intuitive basis – to models in which managerial discount factors or market interest rates depend strongly on the financial situation of a company.