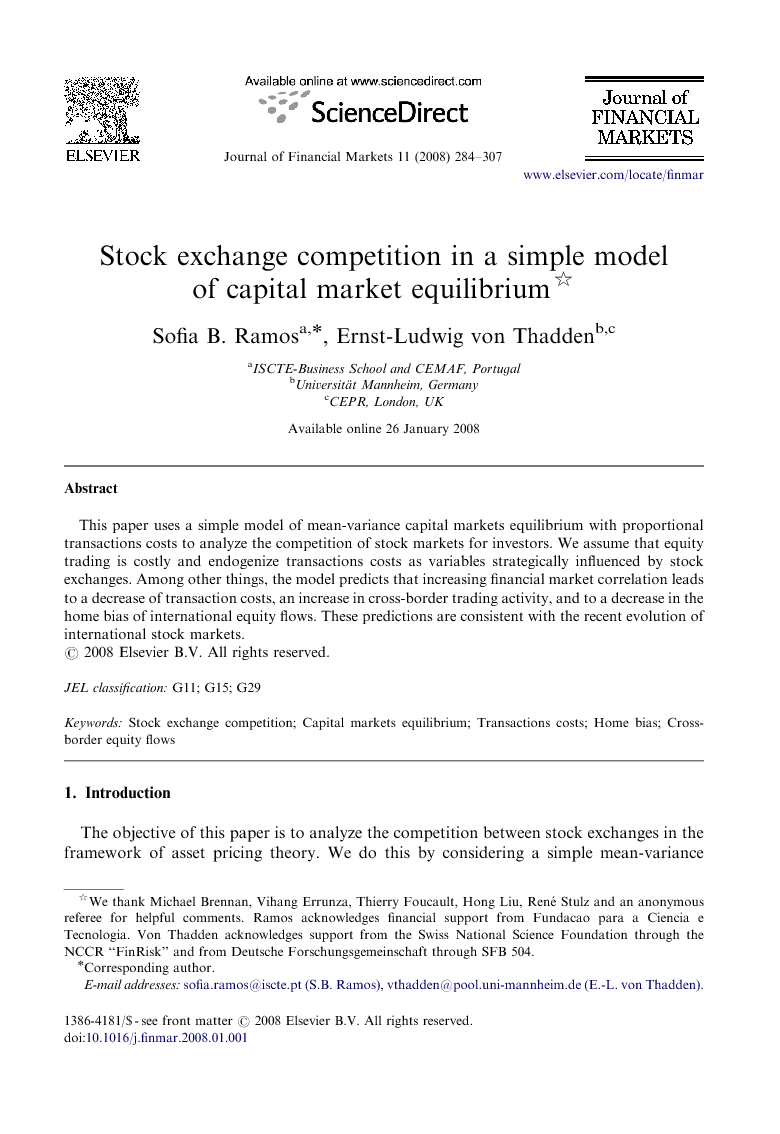 This paper uses a simple model of mean-variance capital markets equilibrium with proportional transactions costs to analyze the competition of stock markets for investors. We assume that equity trading is costly and endogenize transactions costs as variables strategically influenced by stock exchanges. Among other things, the model predicts that increasing financial market correlation leads to a decrease of transaction costs, an increase in cross-border trading activity, and to a decrease in the home bias of international equity flows. These predictions are consistent with the recent evolution of international stock markets.

This paper has analyzed the competition between stock exchanges under the premise that stock exchange fees constitute revenues for the exchanges and transactions costs for the market participants. Using a standard mean-variance capital market equilibrium model with transactions costs, we have thus endogenized transactions costs as variables strategically influenced by stock exchanges. Applied studies typically take transactions costs as exogenous and try to identify their impact on trading. In their empirical study, Domowitz and Steil (2002), for example, estimate that a decrease of 10% in trading costs yields an 8% increase in trading volume and a 1.5% decrease in the cost of capital to blue-chip listed companies. These estimates show how important the effects are that we identify in this paper, but also how important it is to understand their driving forces. The present paper contributes to this task by identifying fundamentals that drive transactions costs and trading volumes simultaneously, and by shedding light on their interaction. In principle, the framework that we have adopted in this paper allows us to study the impact of stock exchange competition on stock market activity quite generally. International portfolio investment is a particularly natural application of our model, as the vast majority of listed firms still is listed on a domestic stock exchange. Hence, the portfolio of firms listed on a domestic stock exchange corresponds largely to the national index, and as a consequence, international portfolio diversification occurs largely via the choice of different national exchanges. More generally, if stocks are not cross-listed, stocks listed on different stock exchanges are only imperfect substitutes for the investors’ portfolio problem, and the competition for investors between stock exchanges takes on an element of strategic complementarity. This type of competition also exists in contexts other than that of international portfolio flows, for example between exchanges specializing in different types of stock, such as the NYSE and the Nasdaq. In this case, the endowment differentials that drive trade in our model cannot be interpreted as international portfolio biases, but rather correspond to other, more conventional portfolio imbalances. The present paper has restricted attention to stock exchange competition for investors. This complements the existing literature that has focused on competition for firms, but still is incomplete. In fact, if stocks can be traded on several exchanges or platforms, stock exchange competition in principle takes the form of two-sided price competition, for the listing of firms on the one side and for the trading activity of investors on the other. This is an example of the more general phenomenon of two-sided markets discussed by Rochet and Tirole (2006), in which the success on one side of the market depends on that of the other and vice versa. Linking our work with the existing work on stock exchange competition for firms in the perspective of two-sided competition is a promising next step on the research agenda.