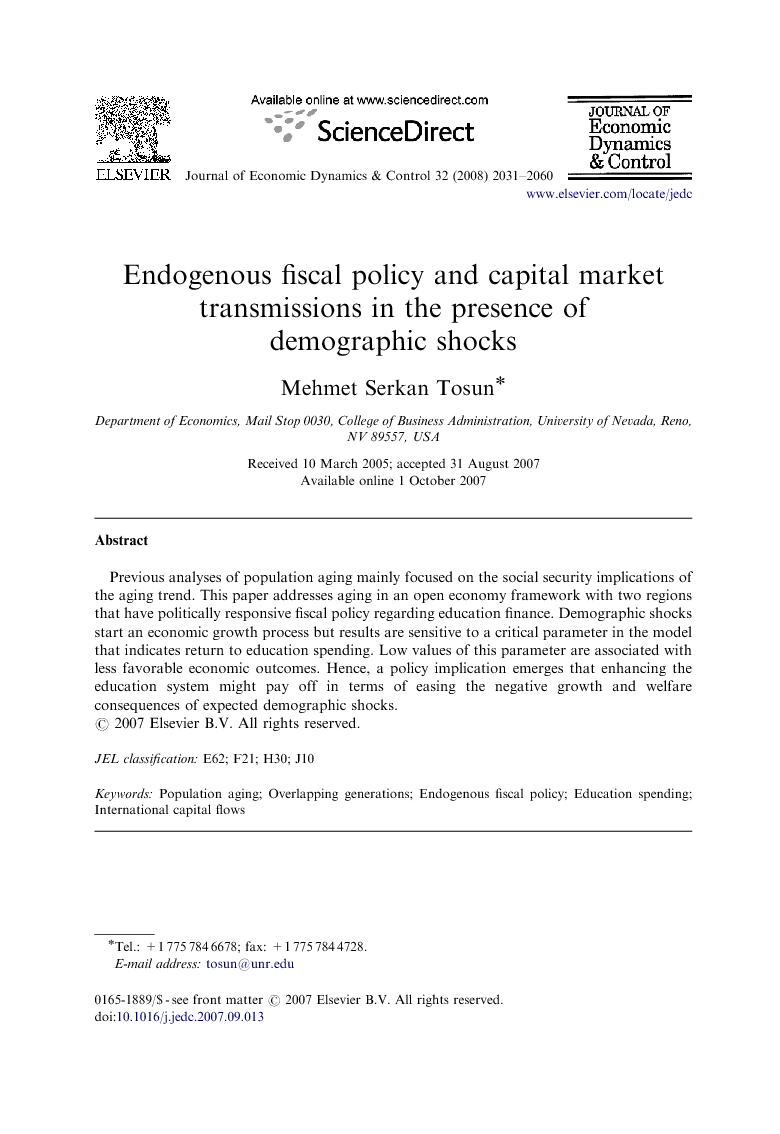 Previous analyses of population aging mainly focused on the social security implications of the aging trend. This paper addresses aging in an open economy framework with two regions that have politically responsive fiscal policy regarding education finance. Demographic shocks start an economic growth process but results are sensitive to a critical parameter in the model that indicates return to education spending. Low values of this parameter are associated with less favorable economic outcomes. Hence, a policy implication emerges that enhancing the education system might pay off in terms of easing the negative growth and welfare consequences of expected demographic shocks.

Population aging affects education spending policy by changing the political balance in favor of the preferences of older generations. This triggers changes in the economy of both the aging region and other regions through the medium of internationally mobile capital. The numerical simulation exercises show that capital flows from the aging region to the late-aging region. The paper distinguishes between the direct effects of having lower growth in workers in the economy and indirect effects arising from fiscal policy dynamics caused by a changing identity of the median voter. The paper shows the significance of combining open economy with endogenous fiscal policy in the same model by comparing this to closed economy and exogenous fiscal policy models. While an effect that is unique to the combined model is identified, it is not possible to determine the direction and exact magnitude of this effect. A numerical simulation exercise shows that despite the negative effects of the demographic shocks on education spending and human capital per worker, these shocks might still trigger a growth process that lead to consumption and welfare improvements. One robust result is that late-aging region experiences a more favorable transition following its own demographic shock compared to region A's transition following its demographic shock two periods earlier. Separate simulations also reveal that these results are sensitive to a critical parameter in the model that indicates the return to education spending. Indeed, the low values of this parameter are associated with less favorable economic outcomes particularly in education spending and human capital. Hence, a policy implication emerges that investing in education system enhancement might pay off in terms of easing the negative growth and welfare consequences of expected demographic shocks.