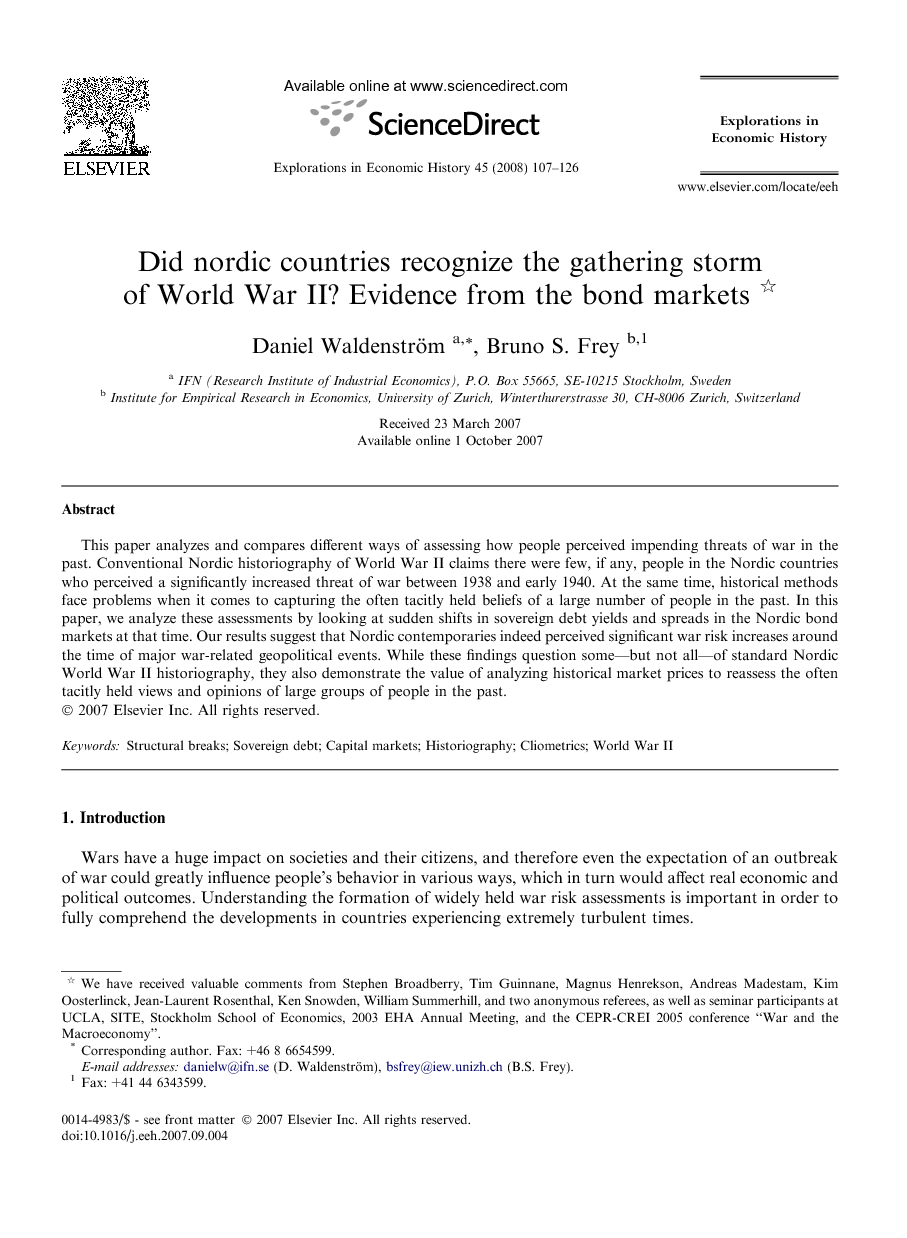 This paper analyzes and compares different ways of assessing how people perceived impending threats of war in the past. Conventional Nordic historiography of World War II claims there were few, if any, people in the Nordic countries who perceived a significantly increased threat of war between 1938 and early 1940. At the same time, historical methods face problems when it comes to capturing the often tacitly held beliefs of a large number of people in the past. In this paper, we analyze these assessments by looking at sudden shifts in sovereign debt yields and spreads in the Nordic bond markets at that time. Our results suggest that Nordic contemporaries indeed perceived significant war risk increases around the time of major war-related geopolitical events. While these findings question some—but not all—of standard Nordic World War II historiography, they also demonstrate the value of analyzing historical market prices to reassess the often tacitly held views and opinions of large groups of people in the past.

Did the people in the Nordic countries expect that their own countries would be drawn into war activities during the turbulent years 1938–1940? This paper examines and compares two different empirical methodologies and their answers to this question. In “conventional” Nordic historical writing, it is argued that there were few, if any, people in these countries who really believed in an attack on their countries. In the other approach, we present new evidence based on detecting large shifts in Nordic government bond yields that coincided with important war events, which together reflect changes in war risks that were assessed in real time by contemporaries. Our main finding is that there are several instances of disagreement between the two interpretations of history. While historians claim that the Nordic people felt safe until the autumn of 1939 (in the case of Finland), the winter of 1939 (in the case of Sweden) and early April of 1940 (in the cases of Denmark and Norway), the prices of these countries’ sovereign debt fell considerably several months before these conjectured dates. In most cases, the yield shifts were direct responses to major war-related events, such as the announcement of the Molotov–Ribbentrop Pact in late August 1939 or the Soviet attack on Finland in late November of that year. We also find, however, points of agreement between historians and markets. For example, Norwegian yields in Oslo dropped after the truce between Finland and the Soviet Union, which indicates widely held sentiments of reassurance in line with the standard historiography. The peaks in all Nordic government yields traded in Stockholm at the outbreak of war also indicate that market traders had not fully anticipated the wars, but only regarded them as likely to some degree (we propose assessed war probabilities in the range of 35–54%).