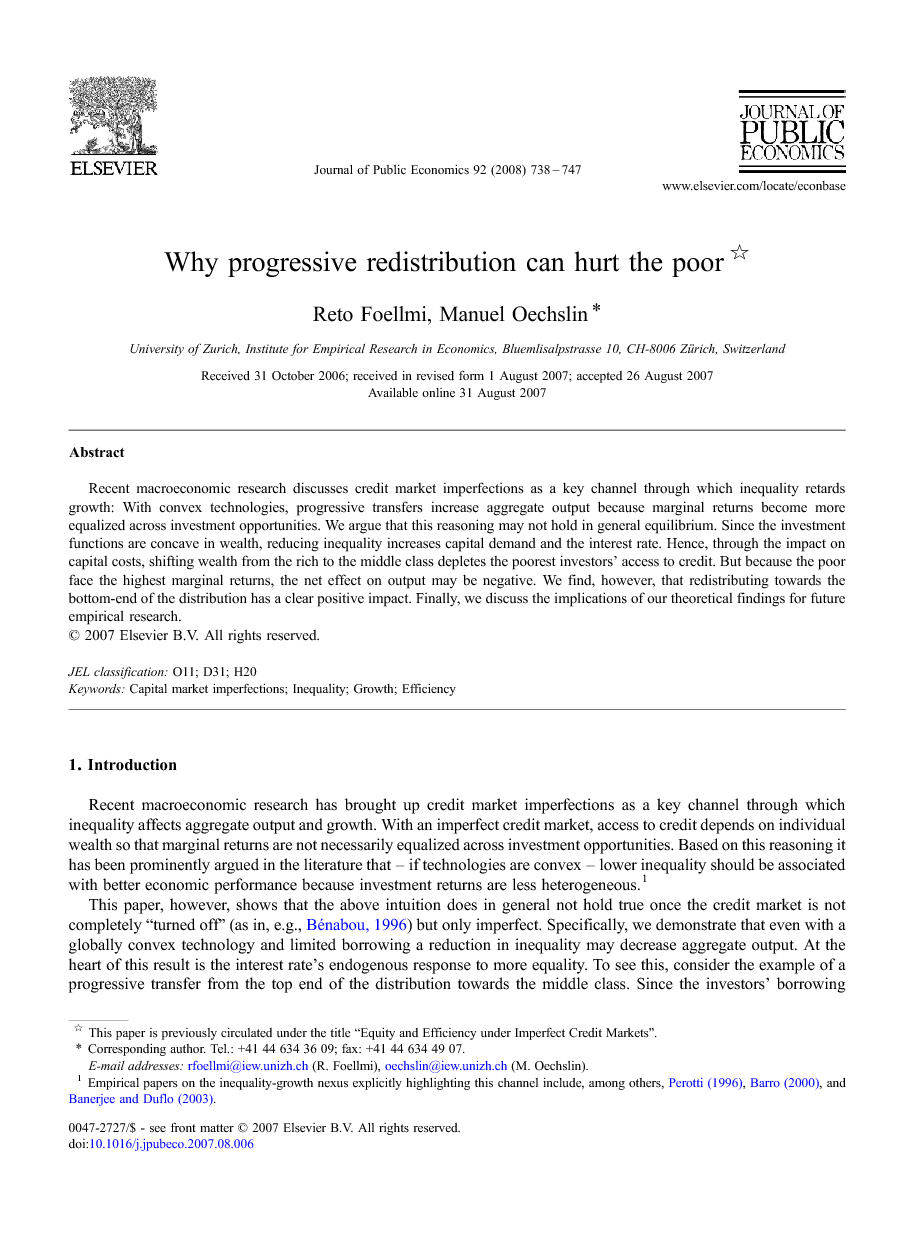 Recent macroeconomic research discusses credit market imperfections as a key channel through which inequality retards growth: With convex technologies, progressive transfers increase aggregate output because marginal returns become more equalized across investment opportunities. We argue that this reasoning may not hold in general equilibrium. Since the investment functions are concave in wealth, reducing inequality increases capital demand and the interest rate. Hence, through the impact on capital costs, shifting wealth from the rich to the middle class depletes the poorest investors' access to credit. But because the poor face the highest marginal returns, the net effect on output may be negative. We find, however, that redistributing towards the bottom-end of the distribution has a clear positive impact. Finally, we discuss the implications of our theoretical findings for future empirical research.

Recent macroeconomic research has brought up credit market imperfections as a key channel through which inequality affects aggregate output and growth. With an imperfect credit market, access to credit depends on individual wealth so that marginal returns are not necessarily equalized across investment opportunities. Based on this reasoning it has been prominently argued in the literature that – if technologies are convex – lower inequality should be associated with better economic performance because investment returns are less heterogeneous.1 This paper, however, shows that the above intuition does in general not hold true once the credit market is not completely “turned off” (as in, e.g., Bénabou, 1996) but only imperfect. Specifically, we demonstrate that even with a globally convex technology and limited borrowing a reduction in inequality may decrease aggregate output. At the heart of this result is the interest rate's endogenous response to more equality. To see this, consider the example of a progressive transfer from the top end of the distribution towards the middle class. Since the investors' borrowing capacity is an increasing but concave function of wealth, such redistribution leads to an outward-shift of the capital demand schedule and hence drives up the interest rate. Holding endowments constant, a higher interest rate tightens the borrowing-constraints of all investors but particularly those of the poorest agents. As a result, the latter have to downsize their investments substantially. But since the poorest investors face the highest marginal returns, this indirect negative effect may dominate the direct positive effect of the progressive transfer.2 Thus, our result comes from the distinction between partial and general equilibrium: The initially cited intuition may be misleading because it ignores a general equilibrium effect that is absent in models with a fixed interest rate or a completely closed credit market. We are, of course, not the only to point out that more inequality in the presence of credit market imperfections may have a positive effect on output. If the production function is not globally concave, the relationship between inequality and output or economic development is ambiguous as well (see, e.g., Galor and Zeira, 1993 and Banerjee and Newman, 1993). However, we emphasize and illustrate by means of an example that the link may be non-monotonic even if non-convexities are entirely absent. Moreover, the example shows that a positive association is not only a local phenomenon but may extend over a wide inequality-range. Hence, also with decreasing returns and significant borrowing-constraints, the theory offers no clear prediction whether a summary statistic for overall inequality (such as the Gini coefficient) should enter growth regression with a positive or negative sign.3 In this light, it is perhaps less of a surprise that the empirical literature in this field is anything but conclusive. While in the present model the relationship between inequality and output is ambiguous in general, we find, however, that a specific type of inequality is clearly bad for efficiency. Reducing inequality by redistributing towards the poorest part of the population unambiguously increases aggregate output. In this case, the poorest investors may clearly scale up their investments, and the negative interest rate effect falls on richer agents with lower marginal products. So what the decreasing-returns framework really points to is a negative link between bottom-end inequality and the GDP.4 Our findings have implications for future empirical research. We suggest that it is more promising to rely on quantile shares rather than on an overall inequality statistic to evaluate the heterogeneous-returns argument. In accordance with the model, such an approach allows inequality coming from different parts in the distribution to have a different impact on economic performance. The remainder of this paper is organized as follows. Section 2 presents the model. The set-up follows Bénabou (1996) with the exception of assuming an imperfect rather than a completely closed credit market. In Section 3, we derive our main results and illustrate that the relationship between inequality and output may be non-monotonic even in a simple example. The implications for future empirical research are discussed in Section 4. Section 5 concludes.

Many empirical studies on the determinants of growth refer to credit market imperfections as a key channel through which inequality retards economic performance: With limited access to credit and convex technologies, redistributing from rich investors to poorer agents improves economic performance because the latter face higher marginal returns. The present paper, however, argues that this reasoning misses an important point. In particular, it ignores that – except for a completely closed credit market or a perfectly elastic credit supply – progressive transfers drive up the interest rate. As a result, progressive redistribution towards the middle may have a negative overall effect: Through the impact on capital costs, such redistribution reduces access to credit of the poorest investors who face the highest marginal returns. It is only when the transfers go to the least affluent individuals that the model points to a clear positive association between a reduction in inequality and economic performance. Thus, even with limited borrowing and convex technologies, we should not expect an unambiguous association between inequality in the Lorenz sense and economic performance but only one between inequality coming from the bottom-end of the distribution and aggregate output. Our analysis has two main implications. First, concerning future research on the inequality-growth nexus, the model suggests to use quantile shares to control for the distribution. This approach accounts for the fact that higher inequality at the expense of the poorest fraction of the population may be more harmful than inequality coming from an uneven distribution between the (upper) middle class and the rich. Recently, the literature has taken some steps towards this direction. Voitchovsky (2005) finds that growth is negatively related to measures of relative poverty and positively to measures for top-end inequality. 14 Although Voitchovsky does not exactly use the empirical measures proposed here, her results are consistent with the implications of our model. The second insight concerns the design of redistributive programs with the objective to dampen the adverse effects of a malfunctioning financial system. The model highlights the importance of not only including the middle class but also the least affluent individuals — in particular if the local credit market is not well integrated into the world market.