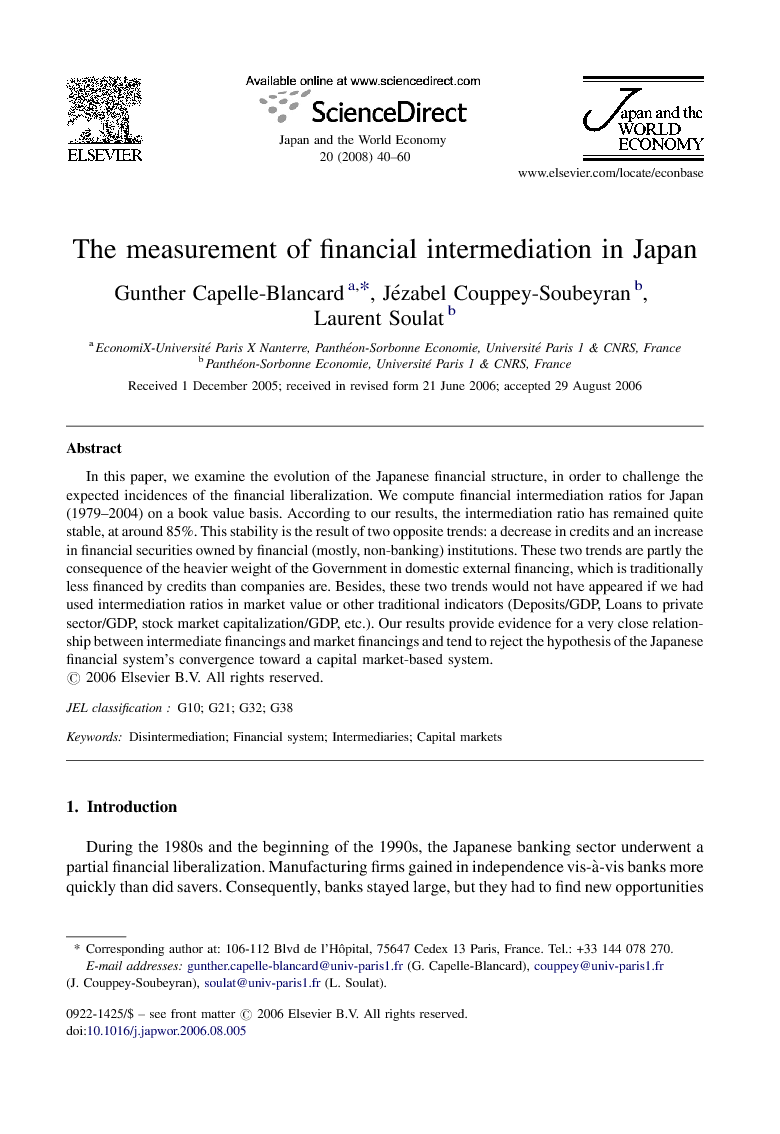 In this paper, we examine the evolution of the Japanese financial structure, in order to challenge the expected incidences of the financial liberalization. We compute financial intermediation ratios for Japan (1979–2004) on a book value basis. According to our results, the intermediation ratio has remained quite stable, at around 85%. This stability is the result of two opposite trends: a decrease in credits and an increase in financial securities owned by financial (mostly, non-banking) institutions. These two trends are partly the consequence of the heavier weight of the Government in domestic external financing, which is traditionally less financed by credits than companies are. Besides, these two trends would not have appeared if we had used intermediation ratios in market value or other traditional indicators (Deposits/GDP, Loans to private sector/GDP, stock market capitalization/GDP, etc.). Our results provide evidence for a very close relationship between intermediate financings and market financings and tend to reject the hypothesis of the Japanese financial system's convergence toward a capital market-based system.

Our results show that the intermediation ratio in Japan remained quite stable between 1979 and 2004, at around 85%. However, this stability is the result of two opposite trends: a contraction of credits and an increase in financial securities owned by financial (mostly public and non banking) institutions. We stressed also that the decrease in the credit intermediation ratio and the increase in the market intermediation ratio are not fully explained by a change in financial behaviors, but are also due to a composition effect of external financings: the decreasing share of corporations in the domestic non financial sector external financings makes the relative fall of loans stronger. Conversely, the increasing share of the general government sector accentuates the relative rise of securities in intermediate financings. At the methodological level, one of the general results of this study is that the measurement of intermediation ratios must be done with outstandings (better suited than flows to long period analyses) corrected for stock price changes. If we had used data on a market value basis, one would show in periods of a strong fall of the Japanese stock market (early 1990s and early 2000s) an increasing, but actually artificial, intermediation ratio. Similarly, a computation using data on a market value basis would have emphasized an artificial disintermediation during the sharp rise in the Japanese stock market from 1980 to 1990. In this respect, a generalization of accounting standards concerning market value would make the measurement of the financings structures even more difficult. In any case a treatment of the data would have to be systematic. Finally, on a theoretical level, by showing that intermediate financings increasingly consist in the purchasing of claims by financial intermediaries, our study confirms the close connection between market financings and intermediate financings and, in this respect, goes beyond the case of Japan. Concepts traditionally used to analyze the evolution of financial systems thus appear less and less operational. This is particularly true regarding the distinction between market (or direct) financing and intermediate (or indirect) financing, and between a bank-based system and a capital market-based system. Market financings are to a large extent intermediate and the orientation of the financial systems is basically mixed. Therefore, to characterize the structures of financing and their evolution over time, the relevant typology should be centered on intermediate financings between credit and claims investment by financial intermediaries.