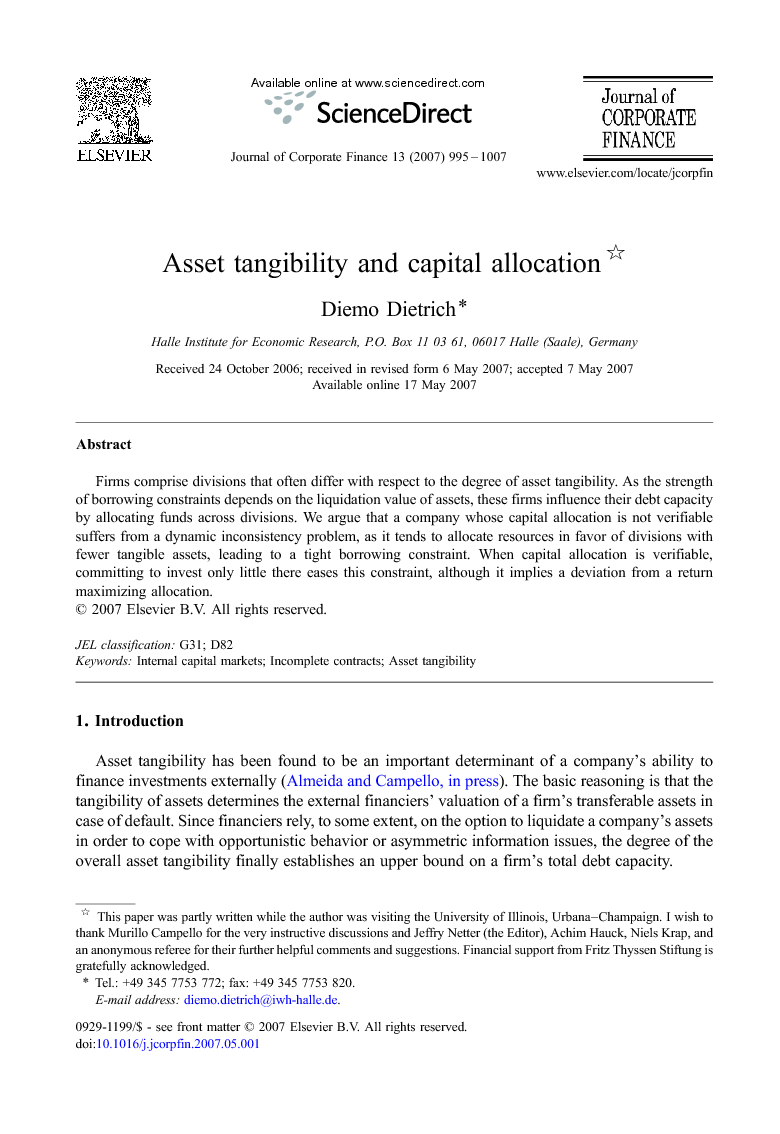 Firms comprise divisions that often differ with respect to the degree of asset tangibility. As the strength of borrowing constraints depends on the liquidation value of assets, these firms influence their debt capacity by allocating funds across divisions. We argue that a company whose capital allocation is not verifiable suffers from a dynamic inconsistency problem, as it tends to allocate resources in favor of divisions with fewer tangible assets, leading to a tight borrowing constraint. When capital allocation is verifiable, committing to invest only little there eases this constraint, although it implies a deviation from a return maximizing allocation.

Asset tangibility has been found to be an important determinant of a company's ability to finance investments externally (Almeida and Campello, in press). The basic reasoning is that the tangibility of assets determines the external financiers' valuation of a firm's transferable assets in case of default. Since financiers rely, to some extent, on the option to liquidate a company's assets in order to cope with opportunistic behavior or asymmetric information issues, the degree of the overall asset tangibility finally establishes an upper bound on a firm's total debt capacity. Credit constraints and their interactions with asset tangibility are typically analyzed within frameworks that identify a firm with a single project. But what happens when a firm has several lines of business that differ with respect to the degree of asset tangibility? How does diversity in terms of asset tangibility affect a company's investment behavior and borrowing constraint? In this paper we address these questions. The starting point is that, when divisions differ with respect to asset tangibility, the financiers' valuation of a firm's assets depends on the intra-company allocation of resources and thus on the financiers' ability to control internal capital markets. There are two cases conceivable. The first is when capital allocation is transparent to financiers such that they can make the use of resources verifiable. Headquarters of such a transparent company is unable to use funds (including the loan) in any way different from what is stated in a loan contract. It can therefore commit itself to any allocation and thus effectively pledges its highly tangible assets for investments associated with less tangible assets. The second case is when financiers are unable to control the allocation of resources because they cannot make it verifiable. A multidivisional firm is then referred to as being opaque, and financiers face the risk that, in the case of default, the proceeds from liquidation will fall short from the face value of debt because of funds having been invested into almost intangible assets. From headquarters' point of view, it is indeed rational to follow this strategy: When debt repayments are bounded to the liquidation value of assets, headquarters can make provisions to reduce these repayments by allocating resources strategically biased, i.e. by directing them mainly to those divisions that are of little value to financiers. While diversity in terms of asset tangibility may apply to many multidivisional companies, an important source of it is global diversification. Multinational corporations (henceforth MNCs) operate in countries that differ with respect to jurisdiction, regulations and other institutional factors that affect asset tangibility.1 For example, when assets are to be liquidated in a country with lacking property rights and unpredictable legal decisions, it may require additional costly safeguarding measures to enforce the claims specified in an asset sale contract. Other problems may arise when labor market regulations form an obstacle for a potential buyer to redeploy assets properly by adjusting employment. Furthermore, in a country with an inadequately developed financial system potential purchasers of assets may be credit constrained. To sum up, opportunities to collect much by means of liquidation may be limited for institutional reasons in some countries, while in other countries institutions allow for higher liquidation proceeds. The main contribution of this paper is to show that for financially constrained MNCs an efficient allocation of resources across business lines can be an indication for severe inefficiencies in financial contracting with external financiers, while an inefficient use of funds indicates that such contractual inefficiencies indeed are less pronounced. The reason is that financiers of an opaque MNC are unwilling to provide funds as long as the firm has an incentive to allocate resources strategically biased. Only if the amount of funds raised externally is sufficiently small, this disincentive vanishes and it is then not optimal for the MNC to deviate from a return maximizing allocation. If, however, the MNC is transparent, its debt capacity is higher because of its contractual obligation to strictly prefer those projects where asset tangibility is higher. But then marginal returns will not be balanced across subsidiaries unless they exhibit similar degrees of asset tangibility. This result contrasts with the notion that when headquarters directs resources towards subsidiaries according to the principle of balancing marginal returns, internal capital markets work efficiently. Besides, the analysis has other important implications. A general first implication refers to the issue of exogeneity of asset tangibility. At first sight, asset tangibility is an exogenous determinant for a firm's borrowing constraint. But once we account for a firm's strategic decision on committing to a specific internal resource allocation, financiers' overall valuation of assets may become endogenous. A further implication is that the credit multiplier, which relates a company's internal funds to its total debt capacity, is stronger for opaque firms than it is for transparent firms. The reason lies in the firms' differing incentive structures. For opaque companies, disincentives to invest strategically biased are mitigated when internal funds increase and financiers are thus strongly inclined to extend lending. For transparent companies, however, there is a tendency to use additional internal funds primarily for reducing allocative inefficiencies, which is generally not in the interest of external financiers who therefore are less willing to lend out more funds. The remainder of the paper is organized as follows. In Section 2, we briefly discuss recent research that is related to our study. In Section 3, we introduce the basic model setup. Section 4 deals with a transparent MNC, while Section 5 focuses on an opaque MNC. In Section 6 we further compare opaque and transparent MNCs. The empirical implications are thereafter discussed in Section 7. The final section consists of some concluding remarks.

In this paper we have developed a theory of corporate investment based on the notion of diversity in asset tangibility. Firms that are opaque to financiers can, in principle, conceal how they allocate funds internally. When, in addition, their subsidiaries differ with respect to tangibility, headquarters has an incentive to favor subsidiaries in those countries where the degree of tangibility is lowest. On the other hand, firms that are transparent concerning the internal capital allocation are able to commit to investing predominantly in countries where financiers will yield higher liquidation proceeds. Our basic argument can, in principle, be applied to a broader set of questions, e.g. what implications do diversity and opacity of conglomerates have for macroeconomic issues such as the international transmission of business cycles, growth, and the effects of financial crisis. Although experiences with the Japanese banking crisis and the East Asian currency crisis have already been suggestive, a deeper analysis of these and related questions is arguably worthy of further research.