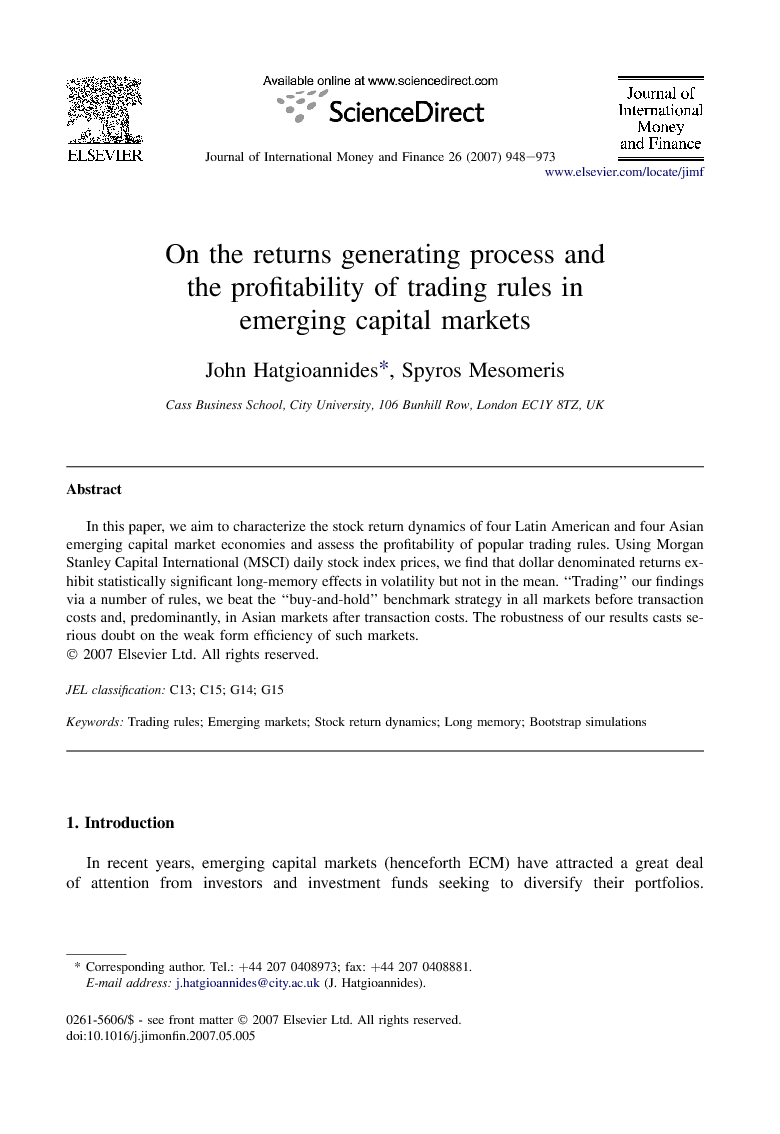 In this paper, we aim to characterize the stock return dynamics of four Latin American and four Asian emerging capital market economies and assess the profitability of popular trading rules. Using Morgan Stanley Capital International (MSCI) daily stock index prices, we find that dollar denominated returns exhibit statistically significant long-memory effects in volatility but not in the mean. “Trading” our findings via a number of rules, we beat the “buy-and-hold” benchmark strategy in all markets before transaction costs and, predominantly, in Asian markets after transaction costs. The robustness of our results casts serious doubt on the weak form efficiency of such markets.

In recent years, emerging capital markets (henceforth ECM) have attracted a great deal of attention from investors and investment funds seeking to diversify their portfolios. Notwithstanding their high risk, the higher sample average returns and low correlations with developed market returns are two of the distinguishing features of ECM returns (Bekaert and Harvey, 1997) that have made such markets increasingly attractive to international investors. Such characteristics, coupled with the financial liberalization process these countries have embarked on, have led to a dramatic increase in capital flows since the early 1990s, with portfolio flows (fixed income and equity) and foreign direct investment replacing commercial bank debt as the dominant sources of foreign capital (Bekaert and Harvey, 2003). Despite the significance of ECM as important conduits of international diversification, little has been said in the literature about the statistical returns generating process, and the profitability of trading rules in these markets. The principal aim of this paper is to fill this void in the literature by modeling the dynamic behavior of stock returns in ECM and assessing the potential profitability of popular trading strategies. Recent studies show that emerging markets tend to exhibit higher volatility (both conditional and unconditional) compared with developed markets (see, for example, De Santis and Imrohoroğlu, 1997 and Bekaert and Harvey, 1997), as well as higher persistence in stock returns (see Bekaert and Harvey, 1997). Such evidence could be attributed to some form of market inefficiency offering opportunities for excess returns, even after adjusting for risk. It could also reflect a more persistent variation of risk factors in ECM. Persistence in equity returns may be attributed to long-range dependence, or long memory, in the returns time series. Arguably, ECM are more likely to exhibit such characteristics than developed markets. Market thinness and nonsynchronous trading biases should be expected to be more severe in ECM, given their low level of liquidity (De Santis and Imrohoroğlu, 1997). Also, “learning effects” are bound to be important since investors in ECM tend to react slowly and gradually to new information (Barkoulas et al., 2000). In addition, the mounting evidence of nonnormality and non-linearities in ECM returns (Bekaert and Harvey, 1997) is consistent with a persistent (either in mean and/or volatility) return generating process in emerging markets. Recently, Cajueiro and Tabak, 2004 and Cajueiro and Tabak, 2005 estimate Hurst exponents and find strong long-range dependence in the volatility of ECM returns. Such characteristics of a market suggest that technical trading rules could be profitable (see Van Der Hart et al., 2003). Technical trading analysis assumes that the patterns in past security price series will recur in the future, and can thus be used for predictive purposes. Furthermore, technical analysis may be used to uncover hidden patterns in stock returns not picked up by standard statistical tests, which can help to better forecast prices. Two questions are being predominantly addressed in this paper: First, within the ARFIMA–FIGARCH framework, the existence of long memory in the mean and variance of ECM stock return dynamics. Second, the relative profitability over and above the buy-and-hold strategy of popular trading rules such as Moving Average and Trading Range Break strategies. The impact of transaction costs and measurement errors in returns is also examined. Furthermore, we re-evaluate the performance of the trading strategies within a risk-return framework using the Sharpe ratio statistic which characterizes whether excess – to the buy and hold – returns generated by our trading rules come at the expense of unduly higher risk. Since the influential paper of Sullivan et al. (1999), any apparent success of trading rules has been confronted with an appropriate degree of scepticism due to data-snooping biases. In order to mitigate the possibility of reporting spurious results, in the empirical part of the paper we are employing a relatively unexplored data set; it is well known that data snooping is aggravated by repeated investigations of the same data set. As Chang et al. (2004),1 we are using the Morgan Stanley Capital International (MSCI) daily stock index price series for eight emerging markets which fall into two geographical regions: Latin America (Argentina, Brazil, Chile, Mexico) and Asia (Indonesia, Philippines, Taiwan, Thailand). A mix of different exchanges is included in our sample and the stock markets examined vary in age, size, and spread of securities traded. Moreover, we are interested in comparing results across regions, given that Latin American markets have been more “open” during the late 1980s and 1990s compared to their Asian counterparts. Our methodology follows the studies by Brock et al. (1992) and Sullivan et al. (1999), as standard statistical tests are augmented by the bootstrap procedure to carry out statistical inferences on trading rule profitability and ability to forecast future price changes. Chang et al., 2003 and Chang et al., 2004 use a similar approach to investigate whether emerging stock markets that we also examine in our study are weak form efficient. However, our study significantly differs in that we decide on the particular specification of the double long-memory ARFIMA–FIGARCH model that is empirically supported in each market. We conduct bootstrap simulations of the underlying returns process using the estimated parameters and standardized residuals for the fitted model and apply our trading rules on each of the simulated series. The ability of the econometric model to generate trading rule results consistent with actual data is examined. The remainder of this paper is organized as follows. In Section 2 we present the econometric framework employed and its rationale. Section 3 addresses the trading strategy methodology and the bootstrap procedure. Section 4 presents the data set. Section 5 analyses our empirical results and assesses their significance. Finally, Section 6 concludes the paper.

In this paper we have carried out a comprehensive study of the returns generating process and profitability of relatively simple and well known to traders technical rules in ECM, notably four Asian and four Latin American countries. Using daily data since 1988 for all countries, we have provided evidence that the dollar denominated returns generating process exhibits statistically significant long-memory effects in the volatility but not in the mean. “Trading” upon such findings, we concluded that VMA and TRB rules outperform the simple “buy-and-hold” strategy for all markets before transaction costs. Predominantly in Asian markets the profitability of the trading rules is sustained even after transaction costs are taken into consideration. Suggestions of possible data-snooping biases in our trading results are partially removed with the use of a data set that was previously relatively unexplored in the academic literature and by reporting results from all rules. Model-based bootstrap simulations reveal that the “favorite” stochastic process for the generation of returns in ECM can reproduce technical trading rule results, particularly for VMA strategies in Latin American countries that are consistent with those from the actual data series. The robustness of our results is further reinforced by: First, predictability in ECM cannot be attributed to nonsynchronous measurement biases. Second, Sharpe ratios that foreign investors can achieve with VMA rules after considering the buy-and-hold benchmark strategy and transaction costs are highly significant across all Asian markets as well as in Chile, and significant for most rules in the other Latin American countries. Furthermore, both excess returns and Sharpe ratios compare favorably with results reported for US studies. Third, the significant forecasting performance of the most profitable VMA strategies in the Asian ECM is unaffected by the Asian crisis. All in all, our results cast serious doubt on the weak form efficiency of ECM economies. It would be interesting for future research to investigate whether the investment flow by foreigners in ECM significantly affects the returns generating process. The latter could be done, for instance, by including the dollar amount of net daily trades by foreigners as an independent variable in the statistical model of returns. At present, the lack of a sufficiently long data series for such trades does not allow us to carry out such a task.