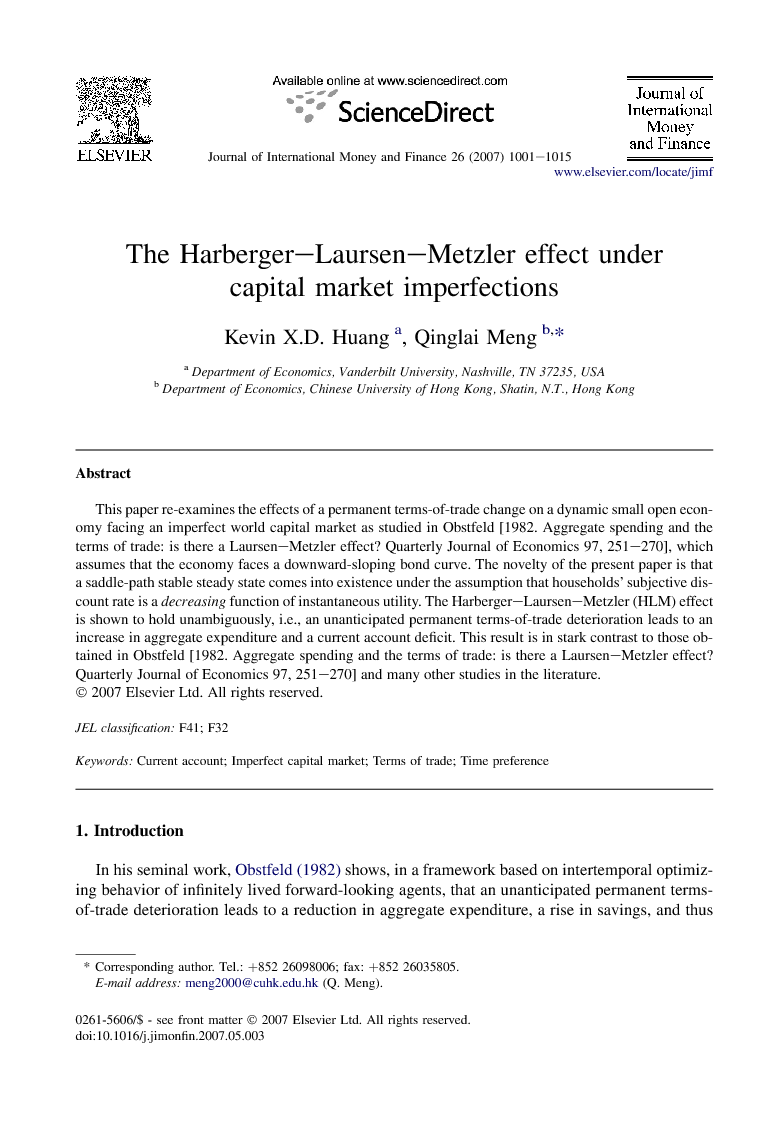 In his seminal work, Obstfeld (1982) shows, in a framework based on intertemporal optimizing behavior of infinitely lived forward-looking agents, that an unanticipated permanent terms-of-trade deterioration leads to a reduction in aggregate expenditure, a rise in savings, and thus a current account surplus. This contradicts what is known as the Harberger–Laursen–Metzler effect. According to the Keynesian analysis of the effects of terms-of-trade shocks by Laursen and Metzler (1950) and Harberger (1950), an adverse shock on the terms-of-trade causes a rise in spending, a decline in saving, and a current account deficit. Obstfeld's paper and the work by Svensson and Razin (1983)1 have stimulated a substantial literature on examining the effects of a terms-of-trade change in dynamic optimizing frameworks.2 While Obstfeld studies both the case with perfect capital mobility and the case with an imperfect capital market, subsequent researchers mainly focus on the case with perfect capital mobility. One reason for this, we believe, is that in the same paper Obstfeld demonstrates that his result is robust to the case with an imperfect capital market. It seems, therefore, that appending the feature of imperfect capital mobility, albeit more realistically, could only complicate the analysis without providing additional significant insights.3 Obstfeld uses the Uzawa (1968) utility function with the subjective discount rate being an increasing function of instantaneous utility. This assumption is crucial for his results and, under perfect capital mobility, is required for steady-state stability for an endowment-type, small open economy with a continuum of infinitely lived representative households.4 In the extension to the case with an imperfect capital market, such an assumption is maintained in Obstfeld's paper. The assumption of an increasing subjective discount rate, on the other hand, is a controversial one, and has been subject to criticism on intuitive grounds. It implies that the rich are more impatient. Many argue that this assumption is unappealing, and indeed Koopmans (1986) believed that the opposite case – decreasing subjective discount rate – should be a “normal case”. Persson and Svensson (1985, p. 45) wrote that “the infinite horizon analysis in Obstfeld (1982) and Svensson and Razin (1983) requires that the rate of time preference increase in wealth for stability of the steady state, a restriction that is arbitrary and even counterintuitive”.5 Using the deterministic perfect-foresight framework, the present paper revisits the issue of the effects of a permanent terms-of-trade change on the economy for the case with an imperfect capital market, where the economy faces a downward-sloping bond curve (or equivalently, an upward-sloping debt curve). This is also the case considered in Obstfeld (1982). To the contrary, the present paper shows that stable equilibrium dynamics exist under the assumption that the discount rate is a decreasing function of instantaneous utility (or consumption). Under the stability conditions, the Harberger–Laursen–Metzler (HLM) effect holds unambiguously, that is, an unanticipated permanent terms-of-trade deterioration leads to an increase in aggregate expenditure and a current account deficit. This result is consistent with those obtained in Laursen and Metzler (1950) and Harberger (1950) in static frameworks, and essentially reverses the findings in Obstfeld (1982) in the case of imperfect capital mobility in a dynamic economy. 6 The reason that the steady-state saddle-path stability can arise in this setup is easy to understand. That the economy faces a downward-sloping bond curve is a stabilizing factor which itself ensures a stable steady state. Decreasing rate of time preference is, on the other hand, a destabilizing factor. In the absence of the former stabilizing factor, the steady state would be unstable. Nevertheless, the stabilizing and the destabilizing forces can coexist, and as long as the stabilizing force dominates, the system still generates stable dynamics.7 Under the stability conditions, the long-run response of an adverse permanent terms-of-trade shock is that both expenditure and bond holdings decline. If the economy is initially at a steady state, the short-run effect requires that spending rise sharply, and then both spending and bond holdings fall gradually to the new, lower long-run levels. The long-run welfare also declines. The rest of the paper is organized as follows. Section 2 presents the model, and the following section characterizes steady state and equilibrium dynamics. Section 4 examines the effects of a permanent deterioration in the terms of trade. Section 5 studies two extensions of the model. Section 6 offers the concluding remarks.

In this paper, we show that, under imperfect capital mobility, there exists a stable steady state of a small open economy with an endogenous, decreasing discount rate. This is contrary to a widely held belief. Under the stability conditions, an unanticipated permanent terms-of-trade deterioration leads to an increase in aggregate spending and a deterioration in the current account. This result is consistent with those obtained by Laursen and Metzler (1950) and Harberger (1950) in static frameworks, and essentially reverses the findings in Obstfeld (1982) in the case of imperfect capital mobility in a dynamic economy. The framework of this paper could be used and extended in various ways, either in one-good or two-good models. First, it could be applied to study the effects of various shocks such as fiscal policy, distortionary taxation and intermediate good price shocks. Second, by incorporating endogenous labor supply and investment, one could extend the current framework to construct a small open economy RBC model with a downward-sloping bond curve (or costly portfolio adjustment) while allowing for the discount rate to be a decreasing function of the utility (or the average utility). Steady-state saddle-path stability would still be ensured in such a model as long as the stabilizing force from the downward-sloping bond curve (or costly portfolio adjustment) dominates the destabilizing force from the decreasing discount rate. 19 Finally, the framework could be extended to a two-country world model in a way as suggested by Devereux and Shi (1991).