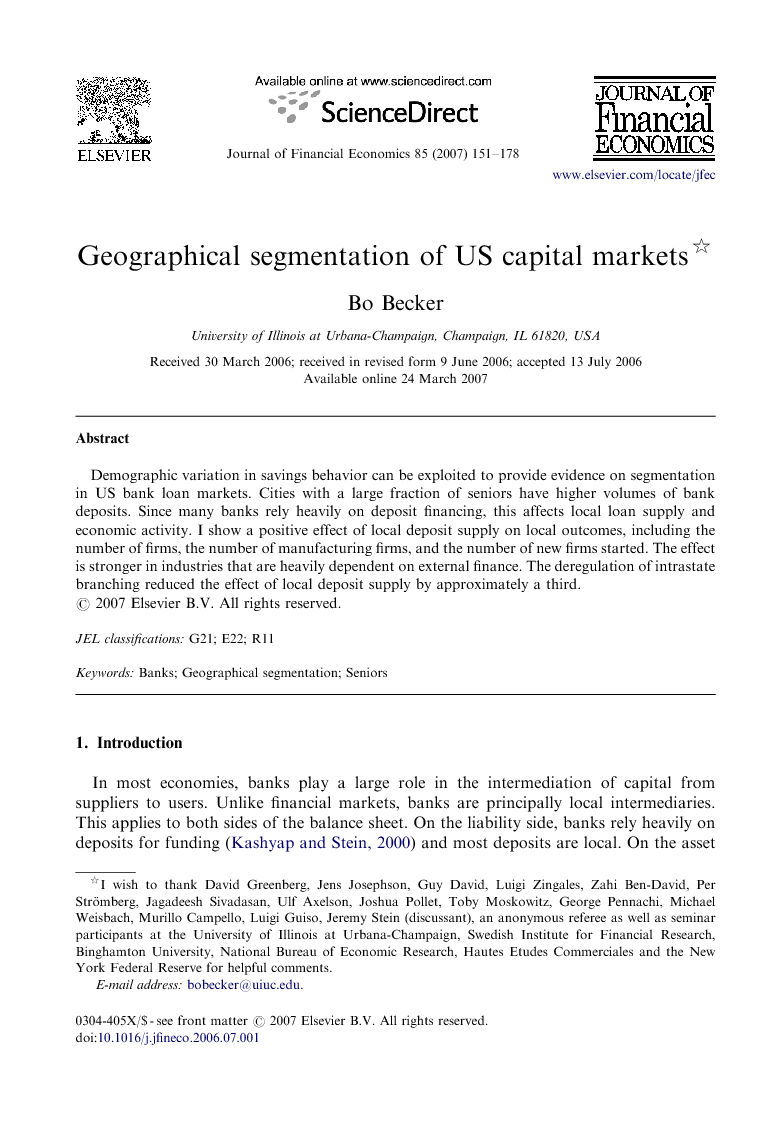 Demographic variation in savings behavior can be exploited to provide evidence on segmentation in US bank loan markets. Cities with a large fraction of seniors have higher volumes of bank deposits. Since many banks rely heavily on deposit financing, this affects local loan supply and economic activity. I show a positive effect of local deposit supply on local outcomes, including the number of firms, the number of manufacturing firms, and the number of new firms started. The effect is stronger in industries that are heavily dependent on external finance. The deregulation of intrastate branching reduced the effect of local deposit supply by approximately a third.

I use the fraction of seniors as an instrument for the local supply of deposits and, hence, of bank loans. The supply of deposits affects economic outcomes: When deposits are high as a result of demographics, there are more firms, especially small, both overall and in manufacturing, as well as more new firms. The results are robust to several alternative specifications: using demographic predictions of future senior numbers, including controls for local wealth, and reducing area size from MSA to ZIP Code. Time-series evidence based on changes in seniors, though based on limited variation, also supports the main cross-sectional findings. If capital has a declining marginal productivity at the MSA level, the welfare implications of variations in the supply of capital to firms are negative. Capital is used at lower marginal productivity in locations with higher loan supply, whereas, in a frictionless world, this capital could be reallocated to a different location with higher marginal productivity of capital. Bank deregulation has been shown to have positive effects on economic outcomes (see, e.g., Jayaratne and Strahan, 1996 and Morgan et al., 2004). In terms of mechanisms, the focus has been on bank competition. My results suggest that the effect of bank deregulation on geographical allocation of capital could be important as well. I estimate that the effect of local deposit supply on the local economy is a third weaker after deregulation than before it. This suggests that US state-level deregulation reduced geographical segmentation (perhaps through increased bank size improving access to internal and external capital markets). This improved geographical allocation could have important welfare benefits. This conclusion has clear regulatory implications. A banking system with small and geographically fragmented institutions (as, e.g. Spain, the US and Italy have had historically) is inefficient because it aggravates the geographical segmentation of capital markets.25 This is likely to be especially severe in geographically large countries and in countries with substantial geographical variation in the supply of capital, as well as in economies where deposit-financed institutions play a large role in financial intermediation. Several extensions of these results would illuminate the effect of capital market segmentation. First, along the lines of Kashyap and Stein (2000) and Campello (2002), are banks in low deposit areas more exposed to monetary shocks? Second, after deregulation, are areas with many small, local banks more exposed to local deposit supply? Third, does the local deposit supply affect loan pricing and the capital structure for local firms?