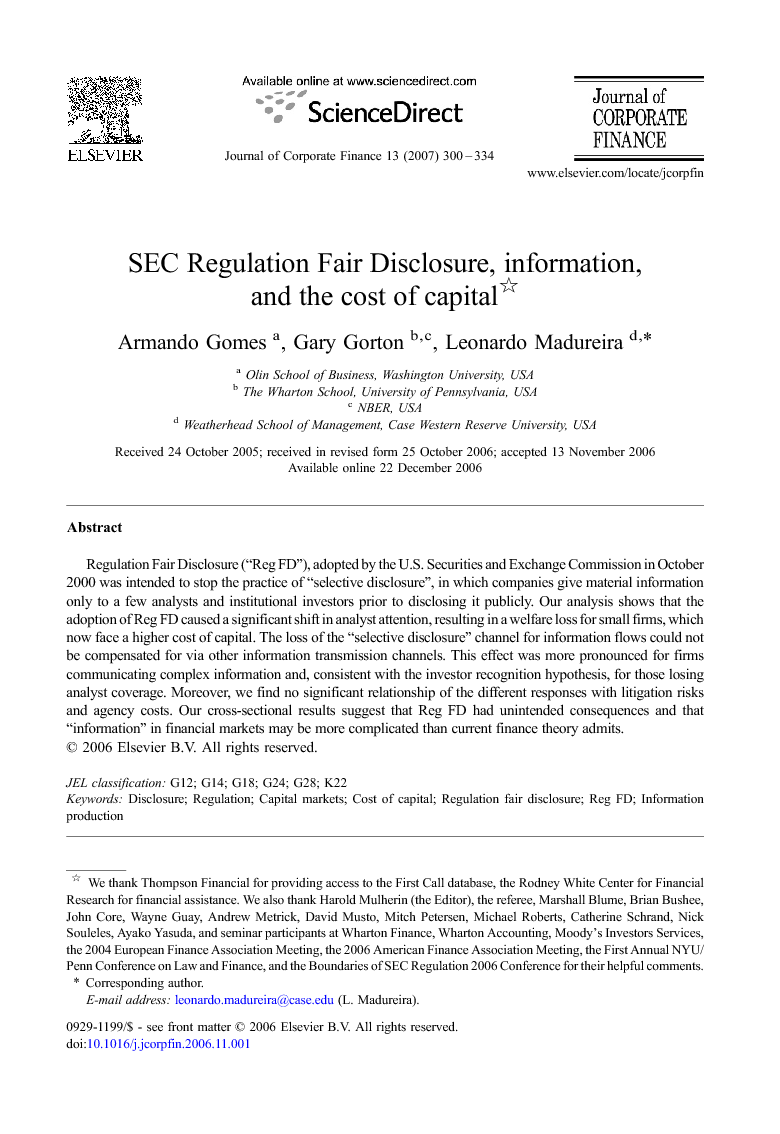 Regulation Fair Disclosure (“Reg FD”), adopted by the U.S. Securities and Exchange Commission in October 2000 was intended to stop the practice of “selective disclosure”, in which companies give material information only to a few analysts and institutional investors prior to disclosing it publicly. Our analysis shows that the adoption of Reg FD caused a significant shift in analyst attention, resulting in a welfare loss for small firms, which now face a higher cost of capital. The loss of the “selective disclosure” channel for information flows could not be compensated for via other information transmission channels. This effect was more pronounced for firms communicating complex information and, consistent with the investor recognition hypothesis, for those losing analyst coverage. Moreover, we find no significant relationship of the different responses with litigation risks and agency costs. Our cross-sectional results suggest that Reg FD had unintended consequences and that “information” in financial markets may be more complicated than current finance theory admits.

Overall, our results suggest that Reg FD had unintended consequences and that “information” in financial markets may be more complicated than current finance theory admits. We found that small firms were adversely affected by Reg FD; their cost of capital rose. Some small firms just completely stopped being followed by analysts, and consistent with the investor recognition hypothesis, the cost of capital increased for those firms. Moreover, public communication does not seem to be a good substitute for private one-on-one communication, where there is a free give and take, especially for firm communicating complex information. This finding is reminiscent of the “small-firm effect” which was first documented by Banz (1981) and Reinganum (1981). Our finding of the return of a small firm effect suggests a reason for this finding, namely, there was a lack of information, perhaps a certain kind of information about small firms. Schwert (2003) suggests that this information was subsequently forthcoming because investors responded to the academic studies. But that was prior to Reg FD. Are our results driven by Reg FD? One final piece of evidence concerns recent developments. The decline in analyst research documented in here has not gone unnoticed by public firms losing coverage or by the marketplace generally. Notably, there has been a significant increase in paid-for-research, in which companies pay research providers for coverage.20 Interestingly, two new firms, the National Exchange Network (NRE) and the Independent Research Network (IRN), have recently been created to act as intermediaries between research providers and public companies. A press release launching the IRN – a joint venture between NASDAQ and Reuters formed June 7, 2005 – provides some further confirmation for the main results in our paper: “Regulation FD (Reg FD) and the Global Analyst Settlement have brought sweeping changes to the research industry. As major broker dealers have focused resources on large capitalization stocks, a growing number of small- or mid-cap companies and ADRs have lost research sponsorship. 38% of all NASDAQ-listed companies and approximately 17% of NYSE companies have no analyst coverage. Over 50% of all publicly listed U.S. companies have two or fewer analysts covering them.”