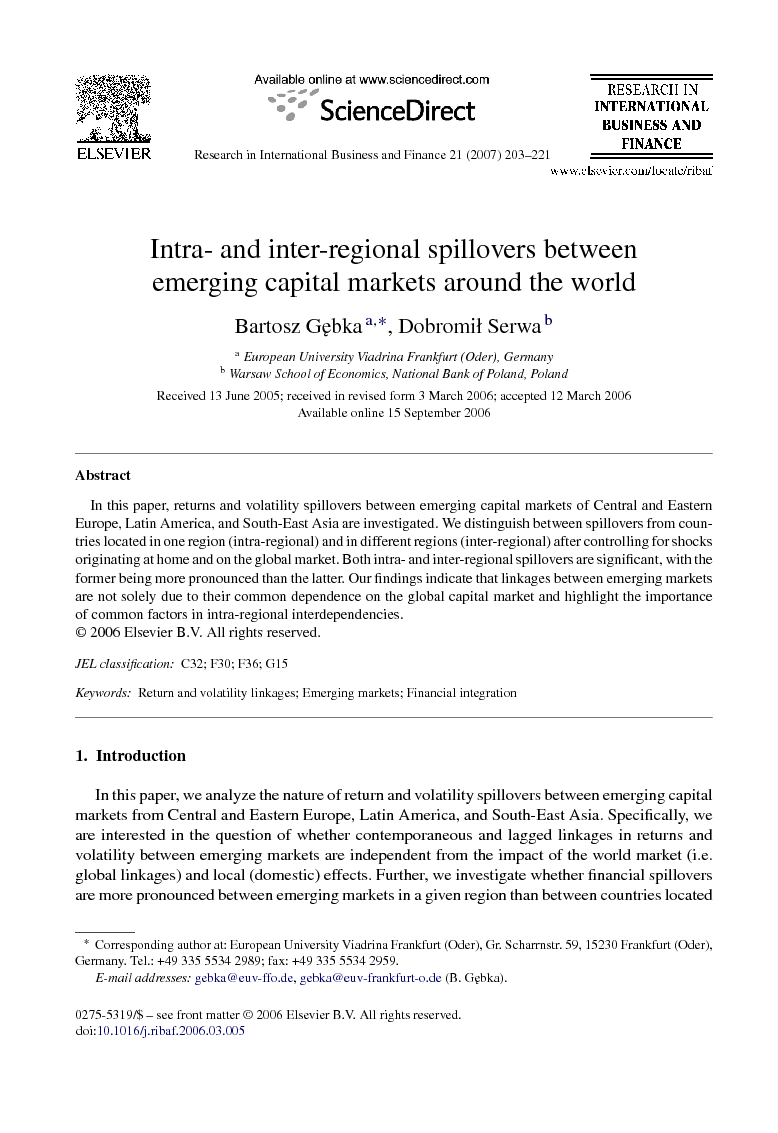 In this paper, returns and volatility spillovers between emerging capital markets of Central and Eastern Europe, Latin America, and South-East Asia are investigated. We distinguish between spillovers from countries located in one region (intra-regional) and in different regions (inter-regional) after controlling for shocks originating at home and on the global market. Both intra- and inter-regional spillovers are significant, with the former being more pronounced than the latter. Our findings indicate that linkages between emerging markets are not solely due to their common dependence on the global capital market and highlight the importance of common factors in intra-regional interdependencies.

In this paper, we analyze the nature of return and volatility spillovers between emerging capital markets from Central and Eastern Europe, Latin America, and South-East Asia. Specifically, we are interested in the question of whether contemporaneous and lagged linkages in returns and volatility between emerging markets are independent from the impact of the world market (i.e. global linkages) and local (domestic) effects. Further, we investigate whether financial spillovers are more pronounced between emerging markets in a given region than between countries located on different continents. On the one hand, we expect strong cultural links, common business conditions, and trade relations within a given region to encourage intra-regional integration. On the other hand, the global trend in technological progress and towards liberalization should give rise to inter-regional spillovers (Kaminsky and Rainhart, 2000, Pritsker, 2001, Gelos and Sahay, 2001 and Pericoli and Sbracia, 2003). In addition, we analyze how quickly foreign news is assimilated by local markets. The study of spillovers between emerging capital markets deserves special attention because of several important effects resulting from international integration. The most striking phenomena are decreasing, but still considerable, average returns, increasingly correlated international stock price movements, and rising beta factors of the national markets with the world market. Although these developments mirror the decreasing risk of investing on emerging markets, they also reduce the scope of international portfolio diversification (Bekaert and Harvey, 2000 and Bekaert and Harvey, 2003). The interest for return causality and, hence, predictability, is obviously motivated by profit considerations of market participants. However, return and volatility spillovers also allow insights into the nature of cross-border flows of information (e.g. King and Wadhwani, 1990). From the investors’ point of view, analyzing volatility sheds light onto asset risk (Merton, 1980), facilitates the valuation of financial products and the development of hedging techniques (Ng, 2000), allows for accurate modeling of the error variance, and improves the forecasts of time-varying confidence intervals and the efficiency of estimators (Poshakwale and Murinde, 2001). For academics, changes in volatility reveal the arrival of information, its assessment and degree of disagreement among traders concerning the news’ impact on asset prices, as well as the magnitude of the news’ assimilation by the market (Ross, 1989 and Engle et al., 1990). In this paper, we extend the existing empirical evidence in several respects. First, many previous studies focused either only on the impact of mature markets on emerging ones (global spillovers) or only on the inter- or intra-regional interdependencies between emerging markets, without controlling for the impact of mature markets. In contrast, we take into account both phenomena and control for the impact of global factors when analyzing linkages in returns and volatility between emerging markets. Second, unlike most previous studies, we explicitly account for the observed return spillovers in the volatility-spillover analysis, since omitting the spillover effects in returns might cause biased inference in the volatility-spillover tests (Cheung and Ng, 1996). Third, this study attempts to measure a delay with which news from abroad is absorbed by the local markets due to the low availability or quality of information, presence of investors pursuing feedback strategies, high transaction costs, and other factors. Fourth, in contrast to the previous studies analyzing emerging markets from one or at best two regions, we focus on emerging countries from three regions simultaneously. Hence, applying an uniform methodology makes it possible for us to directly compare returns and volatility spillovers around the world. In our study, the methodology developed by Cheung and Ng (1996) is applied to explore causality effects between the investigated markets. Most importantly, it allows assessing the speed of adjustment of markets to foreign news. The test of Cheung and Ng has also several advantages over other methods, which are discussed in Section 3. Our main finding based on this methodology is that co-movements between emerging markets are not due solely to these countries’ similar reactions to global shocks, but that emerging markets are also directly related to each other. Spillovers are more pronounced between markets located in one region (intra-regional) than between markets from different regions (inter-regional). The remainder of this paper is organized as follows. In Section 2, we present the relevant literature on emerging market spillovers. Section 3 describes the methodology. Data and empirical results are presented and discussed in Section 4. Section 5 summarizes.

In this study we investigate whether linkages between emerging markets from a given region (intra-regional) and from different regions (inter-regional) result solely from these countries’ common dependence on global shocks originating on the world market, or whether interdependencies between emerging markets are partially independent from these global factors. Moreover, we ask whether countries located in one region are more closely related to each other than with countries from other regions. The existence of spillovers indicates that investors extract information about domestic assets from foreign returns (King and Wadhwani, 1990). We confirm the findings of the majority of previous studies conducted for individual regions that a certain amount of return and volatility spillovers among emerging markets can be explained by their common reaction to shocks originating on the global capital market. However, we also show that linkages between emerging markets remain significant after controlling for global and local (domestic) effects. This indicates that the widely-observed co-movements between emerging markets are not only due to the countries’ common reaction to global shocks. Apparently, factors discussed above such as similarities in economic structure and economic policy, competition of countries’ products on the third markets, common bank lenders, and simultaneous actions of portfolio investors establish real interrelations between emerging capital markets worldwide. Our finding that both global and regional linkages are relevant is in line with the results of Bekaert and Harvey (1997), Ng (2000), and Bekaert et al. (2005), among others. We also find that intra-regional spillovers are more frequent than inter-regional ones, as reported by Edwards and Susmel (2001) and Sola et al. (2002) for a smaller set of countries. This illustrates the relative strength of intra-regional linkages between capital markets from Central and Eastern Europe, Latin America, and South-East Asia, respectively. This finding is in line with the theoretical literature arguing that stronger intra-regional trade relations (both direct and via competition on the third markets), common creditors and portfolio investors from the closest developed market, regional economic integration, and similar macroeconomic policy induce strong financial linkages within a region. We confirm the existence of spillovers in both returns and volatility, with the former being more pronounced than the latter. The analysis of inter-temporal changes in the causation patterns between the markets reveals that the effects found for the entire sample hold also in various sub-samples, indicating at least medium term stability in spillovers. In general, our findings indicate that economists and most importantly investors have to account for local, regional, and global shocks as well as different time zones when analyzing the interdependencies between emerging capital markets around the world.