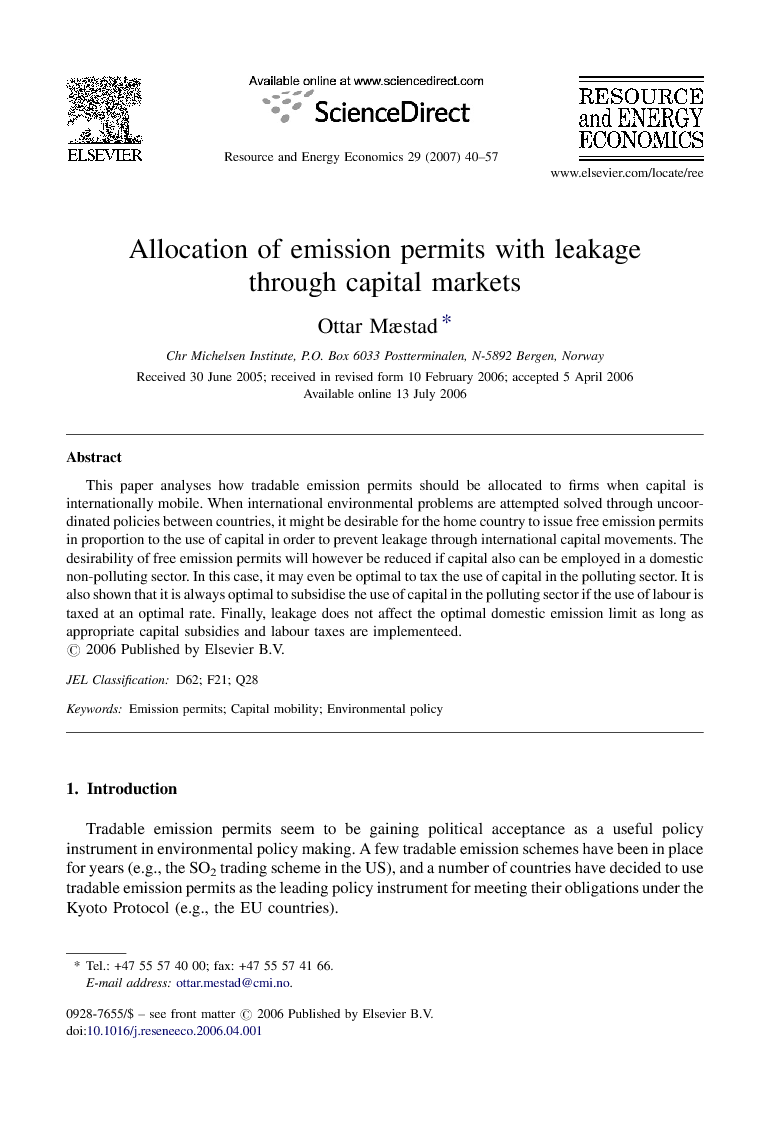 This paper analyses how tradable emission permits should be allocated to firms when capital is internationally mobile. When international environmental problems are attempted solved through uncoordinated policies between countries, it might be desirable for the home country to issue free emission permits in proportion to the use of capital in order to prevent leakage through international capital movements. The desirability of free emission permits will however be reduced if capital also can be employed in a domestic non-polluting sector. In this case, it may even be optimal to tax the use of capital in the polluting sector. It is also shown that it is always optimal to subsidise the use of capital in the polluting sector if the use of labour is taxed at an optimal rate. Finally, leakage does not affect the optimal domestic emission limit as long as appropriate capital subsidies and labour taxes are implementeed.

Tradable emission permits seem to be gaining political acceptance as a useful policy instrument in environmental policy making. A few tradable emission schemes have been in place for years (e.g., the SO2 trading scheme in the US), and a number of countries have decided to use tradable emission permits as the leading policy instrument for meeting their obligations under the Kyoto Protocol (e.g., the EU countries). The use of tradable emission permits in environmental policy raises some important and difficult questions. One question is whether the government should auction the emission permits or distribute the permits free of charge. There are several reasons why this is not merely a question about income distribution. First, to give free emission permits may imply a loss of government revenue. This leads to efficiency costs if public expenditure is financed by distortionary taxes (e.g., Goulder et al., 1997, Parry and Williams, 1999 and Goulder et al., 1999).1 Secondly, free emission permits may in itself affect the resource allocation. The exact effect will depend on the allocation criteria used. Some allocation rules will not affect the real economy at all, such as “grandfathering” based on historical emissions. But other conceivable allocation rules will surely have real effects, for instance when free emission permits are distributed on the basis of the actual level of production or the amount of capital or labour used. As we shall see below, some of these real effects may be desirable while others are not. The question is therefore how free emission permits should be allocated in the most efficient way. The fact that free emission permits may have real effects is particularly interesting in the case when tradable emission permits are used to solve an international environmental problem, such as the climate problem. The fundamental problem when trying to come to grips with the climate problem is that individual countries have incentives to act as free riders. Therefore, coordinated policies, including all affected parties, may be difficult to achieve. However, it may still be possible for a limited number of countries to form a stable cooperating coalition in the sense that it is not in the self-interest of any country to break out of the coalition and resort to non-cooperative behaviour (e.g., Barrett, 1994 and Hoel, 1992). One obvious problem faced by such a cooperating coalition is that policies that reduce pollution within the cooperating countries may cause increased pollution from non-cooperating countries. This is known as the leakage problem. Leakage may occur through several different channels, both through product markets and factor markets. In this paper, we shall focus exclusively on leakage created by international capital movements. If environmental regulations in the cooperating countries reduce the rate of return to capital, and capital is internationally mobile, we may observe capital flight towards the non-cooperating countries. If more capital in the foreign country increases the marginal productivity of polluting inputs, foreign pollution will increase and thus offset emission reductions at home. Certainly, the home country may take action in order to reduce the leakage through capital markets. One obvious candidate would be to put restrictions on capital movements (Hoel, 1996). Such policies are however difficult to implement in practice, since we are usually not talking about restrictions on capital movements in general, but restrictions on capital movements to particular foreign sectors. Such sector specific restrictions on capital movements would be quite easy to evade. If capital exports cannot be taxed or otherwise restricted, an alternative policy would be to subsidise the use of capital at home. This possibility has been discussed by Rauscher (1997) and Mæstad, 2001 and Mæstad, 2006, who find that in order to reduce the leakage through the capital market, the home country should combine emission taxes at home with subsidies to capital. Mæstad, 2001 and Mæstad, 2006 shows that when a system of tradable emission permits rather than emission taxes is used, the desired outcome can be achieved by giving firms a certain number of free emission permits per unit of capital employed in the home country. This paper extends the analysis of Rauscher (1997) and Mæstad, 2001 and Mæstad, 2006 in three directions. First, we introduce an additional non-polluting sector in the home country. When a non-polluting sector exists besides the polluting one, a capital subsidy in the polluting sector creates an additional efficiency loss because too little capital is allocated to the non-subsidised sector. Typically, capital subsidies or free emission permits to pollution intensive industries will not only prevent them from moving abroad; it will also prevent a desirable restructuring of the domestic economy towards less polluting activities. We show that the presence of a clean production sector will reduce the desirability of giving free emission permits to a sector with polluting and internationally mobile firms, except when the home country faces a given international interest rate. Secondly, we introduce a domestic labour market in the home country and discuss how this affects the desirability of giving free emission permits to capital. We show that repercussions through the labour market may reduce the desirability of capital subsidies in the polluting sector. In fact, it may even be optimal to tax its use of capital. Hence, the optimal number of free emission permits may be negative. Thirdly, we analyse the possibility of allocating free emission permits to the polluting sector not only based on its capital use, but also based on the use of labour. We find that emission permits should be allocated in a way that implies a capital subsidy and a labour tax in the polluting sector. The paper is organised as follows. Sections 2 and 3 present the basic model and the welfare function. In Section 4, the optimal number of free emission permits is characterised in different variants of the basic model. Both the case with an exogenously defined emission limit and the case with an optimally chosen emission limit are discussed, and a numerical illustration is provided. Section 5 concludes.