عنوان انگلیسی
Why is the accrual anomaly not arbitraged away? The role of idiosyncratic risk and transaction costs
دانلود فوری مقاله + سفارش ترجمه 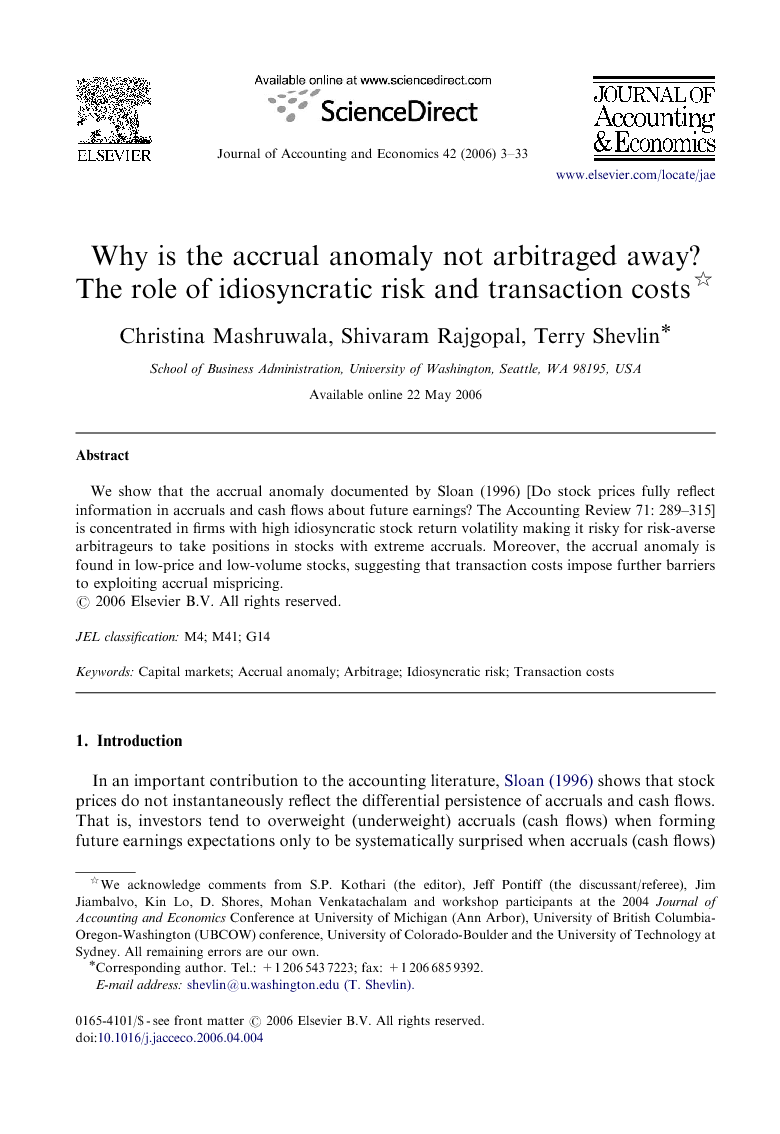 We show that the accrual anomaly documented by Sloan (1996) [Do stock prices fully reflect information in accruals and cash flows about future earnings? The Accounting Review 71: 289–315] is concentrated in firms with high idiosyncratic stock return volatility making it risky for risk-averse arbitrageurs to take positions in stocks with extreme accruals. Moreover, the accrual anomaly is found in low-price and low-volume stocks, suggesting that transaction costs impose further barriers to exploiting accrual mispricing.

In an important contribution to the accounting literature, Sloan (1996) shows that stock prices do not instantaneously reflect the differential persistence of accruals and cash flows. That is, investors tend to overweight (underweight) accruals (cash flows) when forming future earnings expectations only to be systematically surprised when accruals (cash flows) turn out, in the future, to be less (more) persistent than expected. As a result, high (low) accruals firms earn negative (positive) abnormal returns in the future. Subsequent research has argued that sophisticated information intermediaries such as auditors, stock analysts, and even short-sellers do not fully appreciate the information in accruals for future earnings (Bradshaw et al., 2001; Barth and Hutton, 2004; Teoh and Wong, 2001; Richardson, 2003). These findings raise the question of what stops arbitrageurs from taking trading positions to eliminate accrual mispricing. In this paper, we examine two potential explanations for why arbitrageurs might shy away from fully exploiting the accrual anomaly: (i) lack of close substitutes; and (ii) transaction costs. In an ideal riskless hedge, the residual variance of returns to the zero-investment hedge left after netting out the long and short position ought to be zero. The arbitrageur can reduce the residual variance of returns in the hedge portfolio if he can find close substitute stocks whose returns are highly correlated with the returns of the firms subject to accrual mispricing. However, identifying such substitutes turns out to be a difficult task in practice. Following Pontiff (1996) and Wurgler and Zhuravskaya (2002), we use the idiosyncratic portion of a stock's volatility that cannot be avoided by holding offsetting positions in other stocks and indexes (specifically, the residual from a standard market model) as a proxy for the absence of close substitutes. Idiosyncratic risk is relevant to arbitrageurs in our model because we assume that arbitrageurs are risk averse and hold relatively few positions at a time (as in Pontiff, 1996; Shleifer and Vishny, 1997; Wurgler and Zhuravskaya, 2002; Ali et al., 2003; Mendenhall, 2004). We find that the idiosyncratic stock return volatility of stocks, a proxy for idiosyncratic risk, in the extreme deciles of accruals is twice as high as those of firms in the median accrual decile suggesting that the extreme accrual stocks lack close substitutes. Such an absence of close substitutes is likely to create barriers to arbitraging away accrual mispricing. Consistent with this conjecture, the accrual hedge strategy of assuming a long (short) position in low (high) accruals decile earns an annualized return of 14.4% when stocks in the extreme accrual portfolios have high idiosyncratic volatility relative to 3.6% when stocks in the extreme accrual decile portfolios have low idiosyncratic volatility. To further illustrate the impact of the absence of substitutes on portfolio allocation decisions of an arbitrageur, we estimate the amount that a hypothetical arbitrageur should tilt his portfolio away from the market index towards the accrual-based portfolio (see Kothari and Shanken or KS, 2003). Such a portfolio improvement obtained by tilting the market index towards an active strategy depends not only on the expected return to the strategy but also on the idiosyncratic volatility of the trading strategy. The mix of return and the idiosyncratic volatility of the accruals spread portfolio is such that the arbitrageur would tilt 50% of his portfolio towards a strategy designed to exploit the spread in returns between the lowest and highest decile of accruals. However, the incremental return to such a strategy, over the market return, is only 2.1% after (i) reducing Jensen's alphas from the accrual spread portfolios by 50% to account for lack of confidence in the continued future profitability of the strategy; and (ii) standardizing the volatility in the accrual-spread portfolio to equal that of the market. Moreover, such incremental return would be further reduced if transaction costs involved with short selling high accruals stocks were factored into the analysis. Next, we investigate whether the accrual anomaly is concentrated among stocks with higher transaction costs. We find that the greatest returns from the accrual-spread portfolios are found in stocks with the lowest stock price and lowest trading volume. Thus, transaction costs, besides idiosyncratic volatility, likely impose further barriers to arbitrage. In our final analysis, we integrate the above univariate findings about absence of substitutes and transaction costs into annual cross-sectional regressions of firm abnormal returns on accruals and accruals interacted with idiosyncratic volatility, stock price and volume. Consistent with the univariate results, we find that subsequent returns to accrual-based trading positions are reliably higher in stocks with high idiosyncratic volatility and lower trading volume. The results related to share price are somewhat weak in the regression analysis. These cross-sectional results are robust, in general, to the inclusion of control variables known to predict future returns such as size, book-to-market and earnings-to-price. In sum, our evidence suggests that even if smart arbitrageurs were to understand the implications of accruals for future earnings, they are likely constrained by excessive exposure to idiosyncratic volatility and transaction costs to eliminate the mispricing related to accruals.1 Thus, an explanation based on barriers to arbitrage can accommodate the well-documented predictability of subsequent stock returns to accruals data. The remainder of the paper proceeds as follows. Section two presents the background literature and replicates the accrual anomaly for our sample. Section three describes how idiosyncratic volatility can inhibit arbitrage. Section four illustrates the difficulty in implementing the accrual trading strategy by considering the optimal tilt procedure advocated by KS (2003). Section five considers the role of transaction costs in exploiting accrual mispricing. In section six, we conduct a cross-sectional regression to bring together findings from the other sections and section seven provides concluding remarks.

Sloan (1996) documents robust future abnormal stock returns to positions based on last year's accounting accruals. Although it is well known that accruals reverse more quickly than cash flows, a significant body of research has consistently found that several information intermediaries such as stock analysts, short-sellers and even auditors do not act in a manner consistent with an appreciation for the implications of current period accruals for future earnings. This leads to an obvious question: What stops arbitrageurs from driving away accrual-related mispricing? We suggest that two sources of barriers to arbitrage—lack of close substitutes and transaction costs—prevent arbitrageurs from eliminating accrual mispricing. In particular, future abnormal returns stemming from accrual-based trading positions are higher in stocks that lack close substitutes proxied by stocks with higher idiosyncratic volatility. Further, the accruals-based trading strategy is more profitable in stocks with higher transaction costs, in particular firms with lower stock prices and lower dollar trading volume. Some researchers have interpreted findings in Sloan (1996) and Xie (2001) as evidence that the stock market does not see through managers’ attempts to manipulate reported earnings. Our findings suggest that even if smart arbitrageurs see through the implications of accruals for future earnings, they would find eliminating such mispricing difficult.