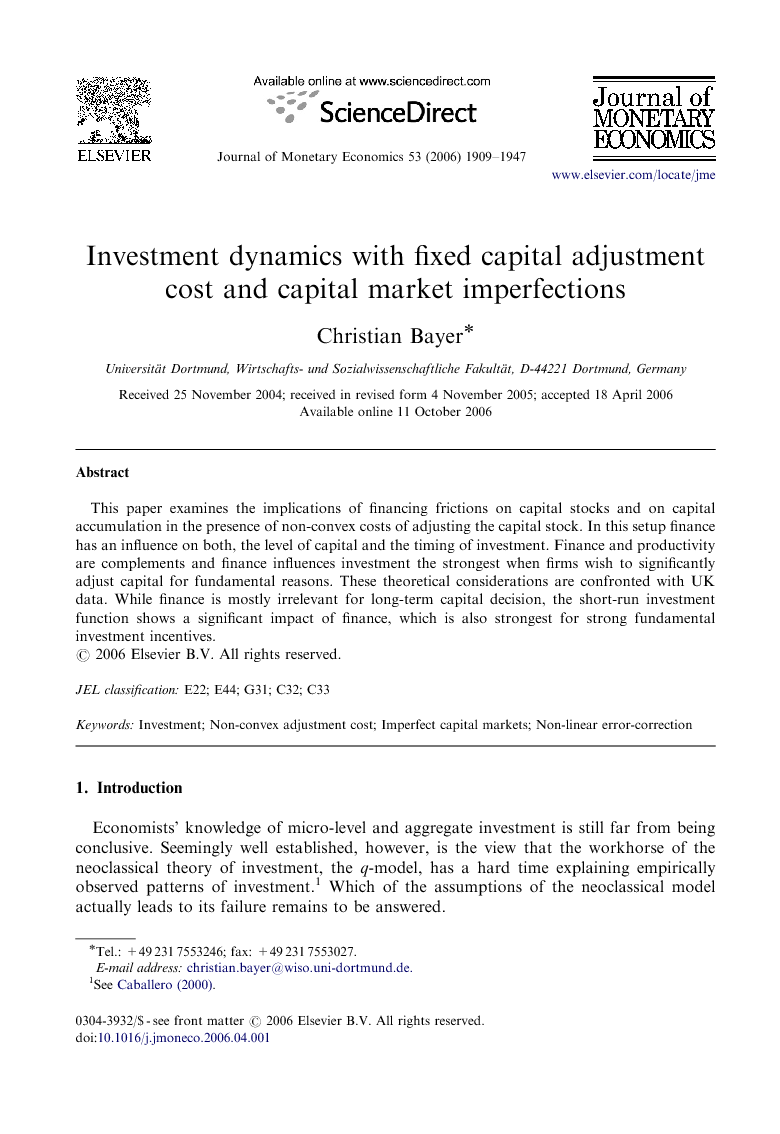 This paper examines the implications of financing frictions on capital stocks and on capital accumulation in the presence of non-convex costs of adjusting the capital stock. In this setup finance has an influence on both, the level of capital and the timing of investment. Finance and productivity are complements and finance influences investment the strongest when firms wish to significantly adjust capital for fundamental reasons. These theoretical considerations are confronted with UK data. While finance is mostly irrelevant for long-term capital decision, the short-run investment function shows a significant impact of finance, which is also strongest for strong fundamental investment incentives.

This paper has presented a model of investment that incorporates an imperfect capital market and fixed investment costs. The major result is to identify the difference between a short-run effect of liquidity on the frequency of investment and a long-run effect on the optimal stock of capital. While models that generate a finance and investment correlation primarily via agency or strategic motives—for example Myers (1977) or Brander and Lewis (1986)—predict the influence of finance through the stock of capital, the model in this paper rather emphasizes an alternative effect via the frequency of investment projects. This suggests a stronger short-term than long-term influence of finance in investment, and empirically, we find exactly this. Moreover, both our theoretical model as well as our empirical findings suggest a substantially non-linear form of the investment function. Fundamentals and finance interact, and with lumpy adjustment, investment is convex in fundamentals. For further empirical research, this result suggests a need for flexible functional approaches. This paper employed a generalized error correction model in which the short-run dynamics (or error-correction function) was estimated entirely non-parametrically.29 A step further could be to take a flexible (semi-)parametric approach to generalize the error-correction process. This could then be further integrated into an indirect inference approach that finally would allow to identify the economic primitives on the basis of the reduced form estimations.30 This might provide further insights, for example it would allow to analyze to what extent convex costs and to what extent fixed costs determine investment behavior. Our entirely non-parametric estimation is unable to distinguish there and can only rule out some model alternatives while being consistent with a class of other investment models. From a policy perspective, our findings have some implications. Suppose there are shocks to the balance sheet positions of firms—for example through exchange rates as in Céspedes et al. (2004), Aghion et al. (2001) or Devereux and Lane (2001)—then this paper's model predicts the real impact of such shocks to have a different timing and impact than the usual financial accelerator model of Bernanke and Gertler (1989) and Bernanke et al. (1998). Productive firms will delay investments, unproductive ones are more likely to sell capital to repay debt. The total effect comes much more up front than over time, the business cycle effect is much more pronounced. The total impact of a shock to balance sheets will depend on the distribution of capital imbalance in the economy in particular. Consider an economy without aggregate capital imbalance. First, assume that firms are heterogeneous in the sense that some firms need to increase their stock of capital, while others need to sell capital. In this situation, a deterioration of balance sheets will lead to a drop in aggregate investment. Now, assume that firms are homogeneous and no single firm wants to adjust its stock of capital for fundamental reasons. By contrast to the former situation, now an adverse shock to the financial situation will not be followed by any strong reaction of aggregate investment. Thus, if fixed adjustment costs are present, policies that influence the balance sheet will have different welfare implications depending on the distribution of capital imbalances across firms. The effects of finance and fundamentals cannot be considered separately, the magnitude of each effect depends on the state of the other variable. In other words, policy makers—for example central banks—need to observe the distribution of capital imbalances in order to predict the implications of their policies.