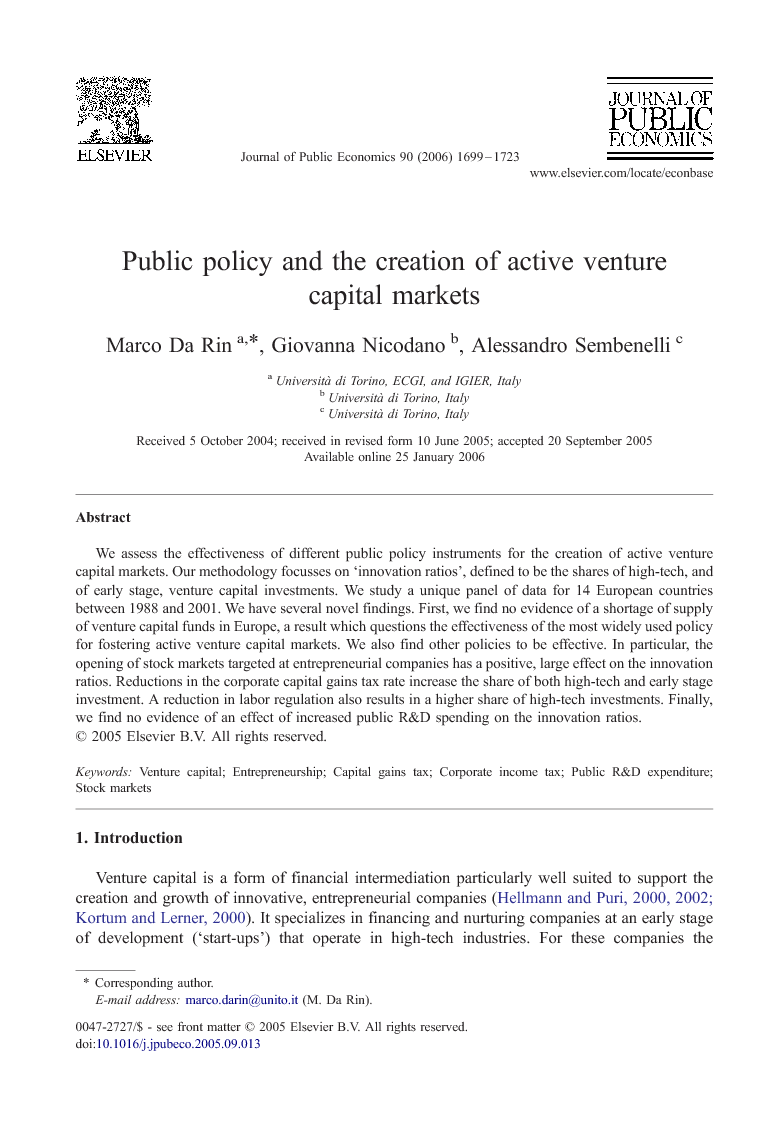 We assess the effectiveness of different public policy instruments for the creation of active venture capital markets. Our methodology focusses on ‘innovation ratios’, defined to be the shares of high-tech, and of early stage, venture capital investments. We study a unique panel of data for 14 European countries between 1988 and 2001. We have several novel findings. First, we find no evidence of a shortage of supply of venture capital funds in Europe, a result which questions the effectiveness of the most widely used policy for fostering active venture capital markets. We also find other policies to be effective. In particular, the opening of stock markets targeted at entrepreneurial companies has a positive, large effect on the innovation ratios. Reductions in the corporate capital gains tax rate increase the share of both high-tech and early stage investment. A reduction in labor regulation also results in a higher share of high-tech investments. Finally, we find no evidence of an effect of increased public R&D spending on the innovation ratios.

In this paper we use a panel data analysis to study how public policy can contribute to the creation of active venture capital markets. The results we obtain from a panel of European country-level data over 1988–2001 provide new insights on the effectiveness of alternative policies. The prevailing policy approach does not receive support from the data. Our results cast more than a passing doubt on the attempt to increase the share of early stage and high-tech venture investments by channeling more funds into venture capital markets, consistent with a ‘money chasing deals’ situation (Gompers and Lerner, 2000). Rather, we find that policies which increase the expected return of innovative projects are more successful in altering the composition of venture capital markets towards early stage projects and projects in high-tech industries. A reduction in capital gains taxation raises the share of early stage and high-tech investments. The availability of stock markets targeted at entrepreneurial companies—which provide a lucrative exit channel—also has a positive effect on the innovation ratios, while a reduction in barriers to entrepreneurship leads to an increase in the high-tech ratio. Finally, the stock of public R&D holds no effect on the innovation ratios. These results suggest a novel interpretation of the ‘European Paradox’ (European Commission, 1994)—the fact that Europe suffers from an inability to turn scientific competence into commercially successful ventures. In the light of our findings, the Paradox seems to be due not to a lack of funding or of attractive technological opportunities, but rather to the difficulties to earn large profits from the creation of new companies, consistent with recent models of entrepreneurship (e.g., Gromb and Scharfstein, 2002). While we cannot offer a conclusive cost-benefit analysis of alternative policies, our findings on their benefits have implications for policy-makers in countries with emerging venture capital markets. There, the impact of policy early in their development might be particularly important. Even if they reflect the European experience, we believe our results have a clear message: sensible policy should consider a wider set of instruments than simply channeling more funds into venture capital.