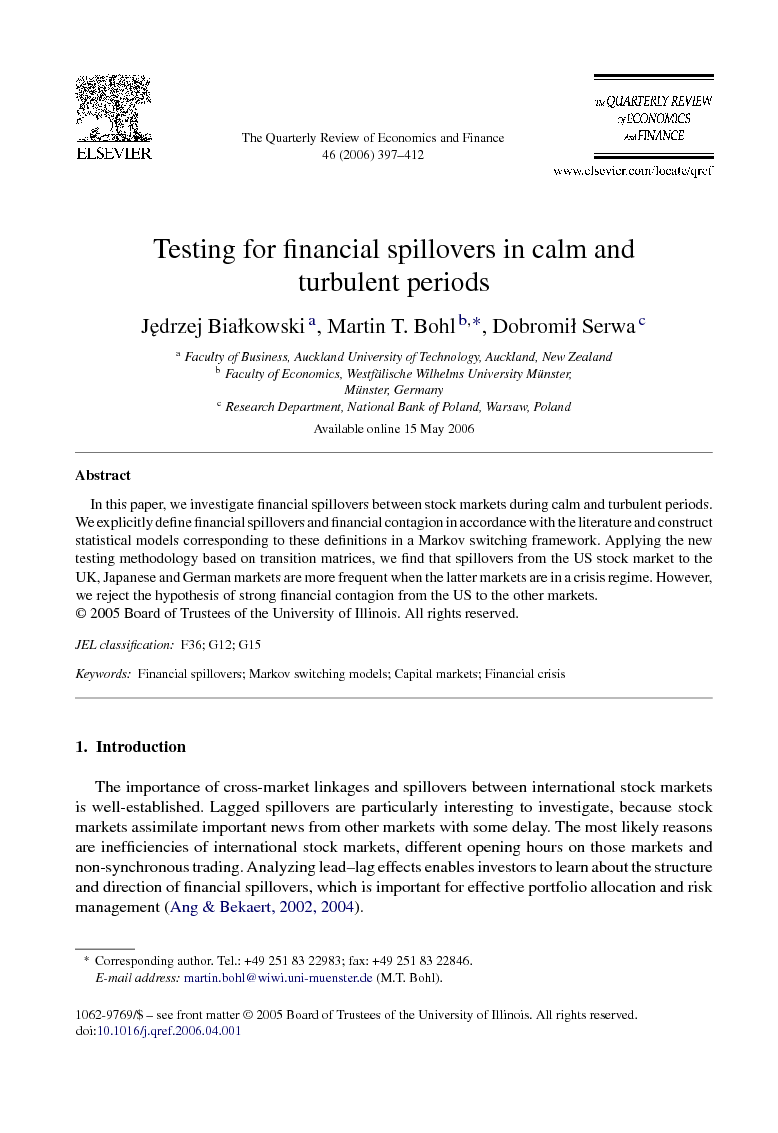 In this paper, we investigate financial spillovers between stock markets during calm and turbulent periods. We explicitly define financial spillovers and financial contagion in accordance with the literature and construct statistical models corresponding to these definitions in a Markov switching framework. Applying the new testing methodology based on transition matrices, we find that spillovers from the US stock market to the UK, Japanese and German markets are more frequent when the latter markets are in a crisis regime. However, we reject the hypothesis of strong financial contagion from the US to the other markets.

The importance of cross-market linkages and spillovers between international stock markets is well-established. Lagged spillovers are particularly interesting to investigate, because stock markets assimilate important news from other markets with some delay. The most likely reasons are inefficiencies of international stock markets, different opening hours on those markets and non-synchronous trading. Analyzing lead–lag effects enables investors to learn about the structure and direction of financial spillovers, which is important for effective portfolio allocation and risk management (Ang and Bekaert, 2002 and Ang and Bekaert, 2004). The differences in financial spillovers during calm and turbulent periods are of special interest to agents who want to learn about the probability of having a crisis in the home market today, when there was a negative shock to another market yesterday. International investors can adjust their portfolio strategies to a changing structure of spillovers in different regimes. Financial market regulators are concerned about the vulnerability of home capital markets to international crises. Despite the importance of both aspects only a few studies investigate changes in lead–lag effects of financial spillovers during calm periods and financial crises. The scarce findings suggest that spillovers from one market to other markets are found to be stronger when the former market is hit by some negative shock (Chen, Chiang, & So, 2003; Climent & Meneu, 2003; Malliaris & Urrutia, 1992; Sander & Kleimeier, 2003; Sola, Spagnolo, & Spagnolo, 2002). This paper develops a Markov switching framework for testing lead–lag dependencies allowing for asymmetries with respect to stock markets’ states of calm or crisis. Phillips (1991) introduced a bivariate Markov switching model to evaluate the transmission of business cycles between countries. Sola et al. (2002) applied this approach in the framework of financial markets to test their specific hypothesis of contagion across stock markets during the Asian crisis of 1997. Edwards and Susmel (2001) added lagged returns and conditional autoregressive heteroscedasticity into the model specification and investigated tests of independence and co-movements between international emerging stock markets in the 1990s. More recently, Białkowski and Serwa (2005) proposed tests for causality between stock markets in a Markov switching framework (see also Psaradakis, Ravn, & Sola, 2005; Ravn & Sola, 1995). We extend the methodology proposed in earlier studies by developing tests for asymmetric financial spillovers in a Markov switching framework. We investigate the hypotheses that first, one market leads the other in both turbulent and tranquil periods and second, one market leads the other only when the latter is already in a turbulent or calm period. We also test for contagion effects in crisis and calm periods and only during crisis periods. Financial contagion is defined as the situation when the calm or crisis regime on one market is always replicated by the second market in the next period, which suggests that all significant shocks are transmitted between stock markets (Sola et al., 2002). Our testing procedure has several advantages over other approaches to analyze the transmission of spillovers across stock markets. First, it does not require an ad hoc identification of calm and turbulent periods to examine spillovers between stock markets. Instead it estimates the probabilities of being in crisis in a joint framework with all parameters of the model. Second, correlation and regression measures often fail to explore non-linear relationships between variables. We propose a test on cross-market spillovers that does not depend on a specific linear or non-linear structure of linkages between stock returns. Third, Sola et al. (2002) provide a test of extreme spillovers, which they call a test of contagion. Our method is more flexible than the one applied there, since it examines a wider range of possible spillovers between stock markets. We consider asymmetric spillover and contagion effects from the US stock market to three major markets in Japan, the UK and Germany during the period from 1984 to 2003. The unique feature of this study is a clinical analysis of spillovers between these markets during three sub-periods containing important international crises. We find that spillover effects to crisis markets are more frequent than to calm markets, but almost always reject the contagion hypothesis in the spirit of Sola et al. (2002). Additional results that distinguish this paper from earlier research are estimated probabilities of entering the state of calm and crisis by each of the Japanese, British and German stock markets, dependent on past information from these markets and from the US stock market. The remainder of this paper is organized as follows. In the next section, we describe the model based on the idea of Phillips (1991) to estimate stock index returns on two markets. Section 3 discusses our definitions of financial spillovers and discusses the tests for dependencies between the markets. Data and empirical results on spillovers from the US stock market to the Japanese, British and German stock markets are presented in Section 4. Section 5 summarizes and concludes.

We investigate international financial spillovers from the US stock market to the Japanese, British and German markets. We introduce a statistical framework to deal with the problem of asymmetries in financial spillovers in calm and turbulent regimes. Spillovers and contagion to stock markets during crisis and calm periods are explicitly defined and new tests are proposed to distinguish between financial spillovers in crisis and calm regimes. Our testing framework is capable of distinguishing between different types of relationships connecting two stock markets, i.e., contagion, spillovers and independence. Thus, we compare the results from testing financial spillovers with outcomes from the tests of contagion and independence. Our findings show that the Japanese, British and German stock markets are dependent on the past performance of the US market, but encounter almost no indication of contagion in the spirit of Sola et al. (2002). Spillovers take place more frequently if the dependent stock markets are in the crisis regime relative to the calm one, which is in line with the results in Chen et al. (2003). This result suggests that financial crashes on the US market do not always directly cause turmoil on the Japanese, British and German stock markets. However, the crashes on the US market increase the probability of a crisis on the three other stock markets, which is in line with the hypothesis of contagious crises introduced by Eichengreen et al. (1996). The finding that less spillovers from the US to other stock markets during calm relative to crisis periods has an implication for an international portfolio diversification strategy due to its lower benefits in turbulent regimes. Additionally, we present the probabilities for the Japanese, British and German stock markets individually entering the states of calm and crisis periods, conditional on the information about the past performance of those markets and the US market. Information from both markets is found to be relevant for efficient forecasting of future stock market index returns on those markets, therefore further research could incorporate our framework in testing for diversification benefits from asset allocation on international markets, as in Ang and Bekaert, 2002 and Ang and Bekaert, 2004.