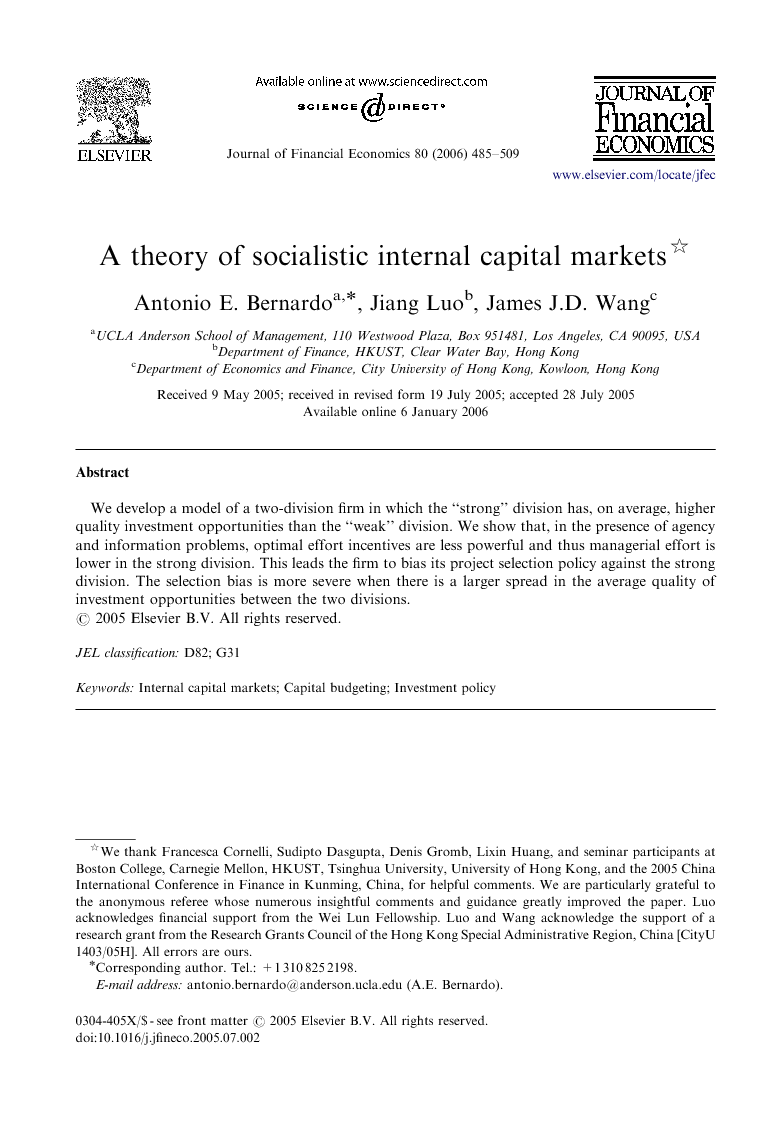 We develop a model of a two-division firm in which the “strong” division has, on average, higher quality investment opportunities than the “weak” division. We show that, in the presence of agency and information problems, optimal effort incentives are less powerful and thus managerial effort is lower in the strong division. This leads the firm to bias its project selection policy against the strong division. The selection bias is more severe when there is a larger spread in the average quality of investment opportunities between the two divisions.

In this paper, we develop a model of a two-division firm in which the optimal effort incentives to division managers with private information about project quality are less powerful in the division with higher quality investment opportunities. This leads the firm to bias its project selection policy against the strong division to offset the lower level of managerial effort. The selection bias is more severe when there is a larger spread in average project quality between the two divisions. One important advantage of our model over competing theoretical models of socialistic internal capital markets based on managerial rent-seeking behavior (Scharfstein and Stein, 2000 and Rajan et al., 2000) is that we derive our results under the plausible assumption that firms can write managerial compensation contracts based on division cash flows. While our model makes several similar predictions to the above competing theories, we make numerous novel testable predictions about the severity of the bias in internal capital markets, the effect of idiosyncratic risk on project evaluation, and the form of managerial compensation. In our model, firm scope is given exogenously but in reality it is determined by considering the various costs and benefits of integration. For example, the benefits of integration include the slackening of financial constraints (e.g., Billett and Mauer, 2003) and the possibility that the CEO may be better informed about the firm's investment opportunities than the external capital market (e.g., Stein, 1997), while the costs of integration include the diversion of managerial talent, higher influence costs within the organization, and weaker incentives to improve the firm's investment opportunity set (e.g., Brusco and Panunzi, 2005). In future research, we hope to endogenize firm scope to obtain a fuller understanding of observed differences in investment policy across conglomerate and focused firms.