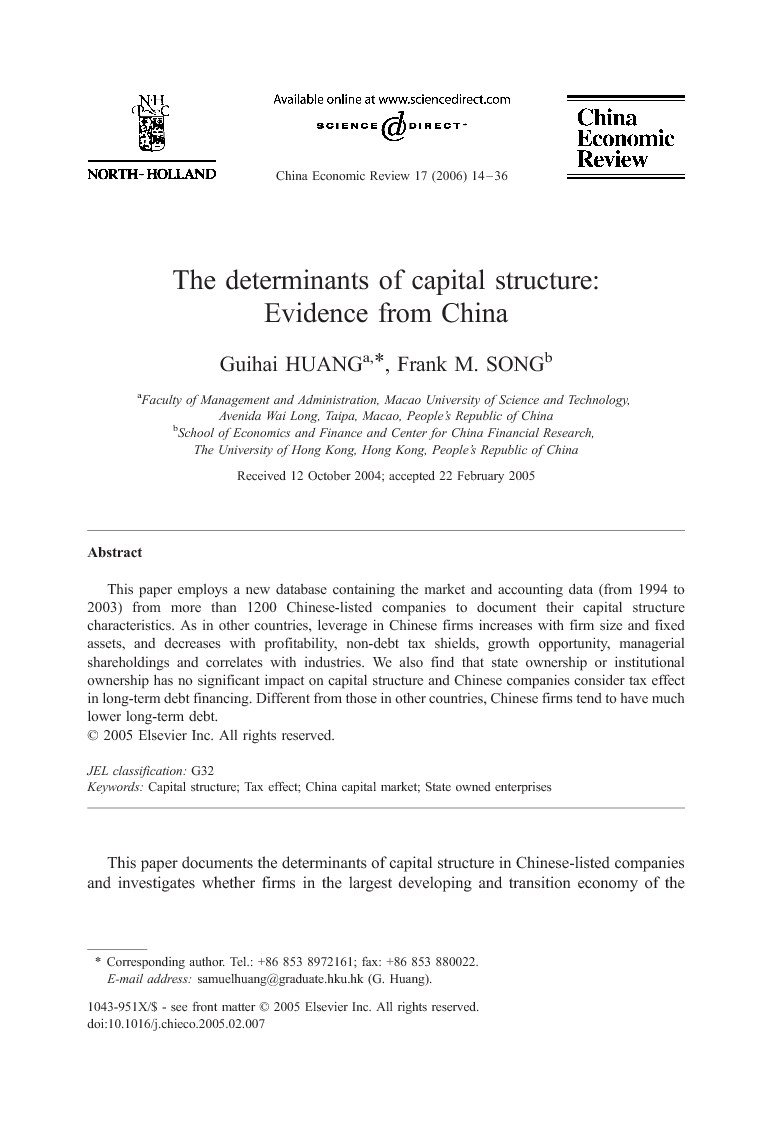 This paper employs a new database containing the market and accounting data (from 1994 to 2003) from more than 1200 Chinese-listed companies to document their capital structure characteristics. As in other countries, leverage in Chinese firms increases with firm size and fixed assets, and decreases with profitability, non-debt tax shields, growth opportunity, managerial shareholdings and correlates with industries. We also find that state ownership or institutional ownership has no significant impact on capital structure and Chinese companies consider tax effect in long-term debt financing. Different from those in other countries, Chinese firms tend to have much lower long-term debt.

The forces working on firms' capital structure in other countries also work in a quite similar way in China. Although China is still transforming its economy from a command economy to a market economy, and the state is still the controlling shareholder for most listed companies, the factors which affect firms' leverage in other countries also affect Chinese companies' leverage in a similar way. Specifically, leverage, as measured by long-term debt ratio, total debt ratio and total liabilities ratio, decreases with profitability, non-debt tax shield, managerial shareholdings, and increases with company size. Tangibility and effective tax rate have a positive effect on long-term debt ratio and total debt ratio. State shareholdings or institutional shareholdings have no significant impact on capital structure. Firms that have bright growth opportunities tend to have lower leverage. Why is the relationship between the explanatory variables and leverage in China similar to that in other countries? One explanation is that Chinese-listed firms are the best part of the country's economy in terms of corporate governance, and they have followed the basic rules of market economy. State ownership of these firms does not prevent these firms from following rules of the market. So it is desirable to list SOEs, even if the state does not give up its controlling right. Also, it implies that competition, except property right reform, helps in the reform of SOEs. While the findings in developed countries are mostly applicable to China, the capital structure of Chinese companies has some different features. First, although the practice of the General Accepted Accounting Principles (GAAP) varies across the world, and a rigorous comparison in capital structure across countries is impossible, we have clear evidence that Chinese companies have less long-term debt, less total liabilities and higher shareholders' equity compared to their counterparts in both developed countries (e.g., US, Japan, Germany, France, Italy, UK, Canada) and some developing countries (e.g., India, Pakistan, Turkey). Second, Chinese companies tend to rely on higher levels of external financing, especially higher levels of equity financing, than those in other developed countries. Our calculation from the database CSMAR shows that more than 50% financing comes from external debt or equity issues, and net equity issues make up more than 50% of external financing in China. By contrast, net equity issuance is negative in the United States during 1991–1993 (Rajan & Zingales, 1995). Third, the difference between book value and quasi-market value of leverage is much bigger in China than that in other countries. Generally the market value of leverage is much lower than the book value of the same leverage measure in China. Why do Chinese firms have such a low long-term debt ratio? One possible reason is that Chinese firms prefer and have access to equity financing once they go public, as most firms enjoy a favorable high stock price. This is the case, at least when compared to the book value of equity. As mentioned, the remarkably high Tobin's Q makes Chinese firms prefer equity financing over debt financing, at least from the perspective of state or institutional shareholders. Also, the management prefers equity financing rather than debt financing because the former is not binding. Another possible explanation is the fact that the Chinese bond market is still in an infant stage of development. Banks are the major or even the only source of firms' external debt. As a result, firms have to rely on equity financing and trade credit, where firms owe each other in the form of accounts payable. In order to provide more financing opportunities for Chinese firms, it is desirable for China to accelerate the development of its bond market. Lastly, one warning seems to be appropriate. It is only a first step to document the characteristics of Chinese-listed companies in the regard of capital structure. More research needs to be done. For example, this study does not find significant impact of state ownership or institutional ownership on capital structure. Excepting reasons discussed above, another possible reason is that ownership structure has considerable impact on the factors of capital structure such as profitability and Tobin's Q, which in turn affects capital structure of those companies. How to explain such phenomena deserves further study.