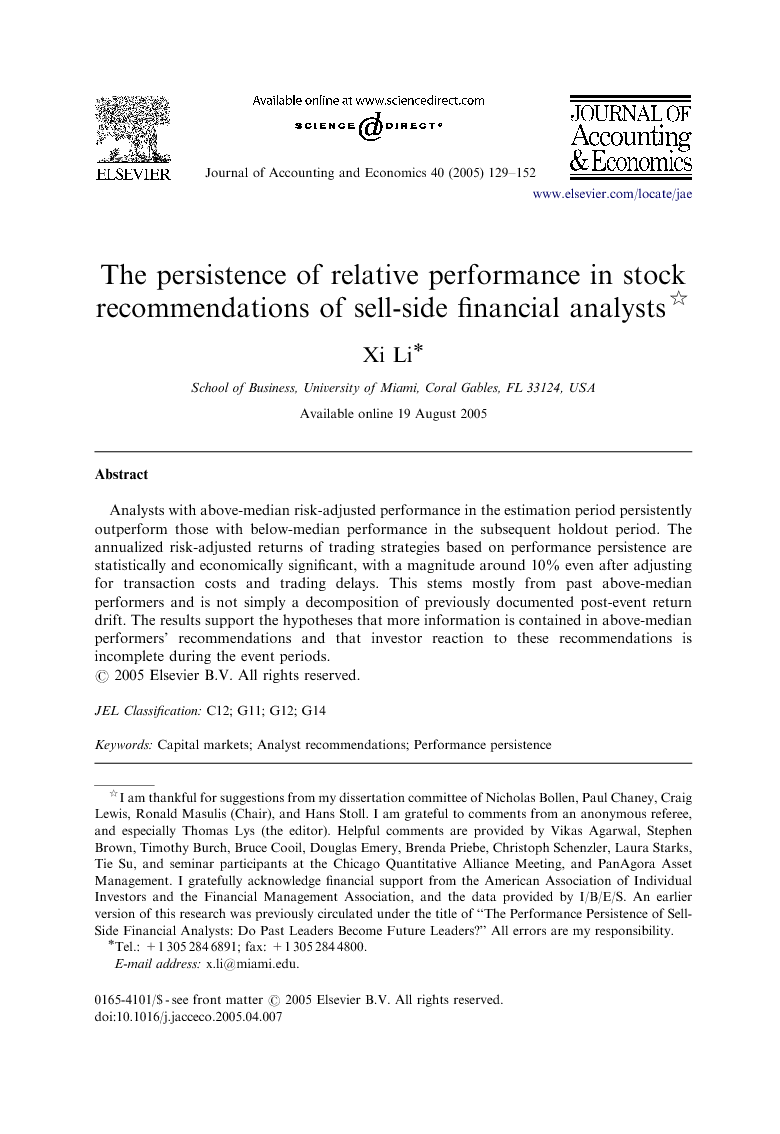 Analysts with above-median risk-adjusted performance in the estimation period persistently outperform those with below-median performance in the subsequent holdout period. The annualized risk-adjusted returns of trading strategies based on performance persistence are statistically and economically significant, with a magnitude around 10% even after adjusting for transaction costs and trading delays. This stems mostly from past above-median performers and is not simply a decomposition of previously documented post-event return drift. The results support the hypotheses that more information is contained in above-median performers’ recommendations and that investor reaction to these recommendations is incomplete during the event periods.

I examine the persistence in the relative performance of stock recommendations made by individual analysts and find significant evidence of a violation of the semi-strong form of the efficient markets hypothesis. Analysts with above-median risk-adjusted performance in the estimation period (past winners) consistently outperform those with below-median performance (past losers) in the subsequent holdout periods, even with alternative adjustments for cross-sectional correlation, risk, testing methodologies, portfolio weighting schemes, sample period selection, return measurement intervals, and various analyst and firm characteristics. The annualized risk-adjusted returns of trading strategies based on performance persistence are statistically and economically significant, with a magnitude around 10% even after adjusting for transaction costs and trading delays. This magnitude is many times greater than what is typically found in the existing literature on analysts and fund managers. The overall persistence stems mostly from past winners and is not a decomposition of post-event return drift as documented by the prior literature. A significant portion of the abnormal returns following analyst recommendations are realized around subsequent announcements of earnings, stock recommendations, and earnings forecasts, especially for the 10th decile analysts, further supporting a market inefficiency explanation. In addition, these abnormal returns that are much greater than those for fund managers do not seem to be due to differences in working environments or data availability between analysts and mutual fund managers, which point to an interesting research question given many fund managers use analyst research. Analyst buy recommendations exhibit much more consistent performance persistence than sell recommendations. In summary, the evidence is consistent with the hypotheses that (1) past winners’ recommendations are more informative, and (2) investors underreact to past winners’ recommendations and overreact to past losers’ recommendations. My results also point toward a trading strategy that can potentially be exploited by investors. Because an analyst covers only a limited number of stocks and does not frequently revise recommendations, even individual investors can realistically mimic a stock portfolio recommended by a top analyst. Raw return persistence offers a strategy for investors such as hedge fund managers to follow.