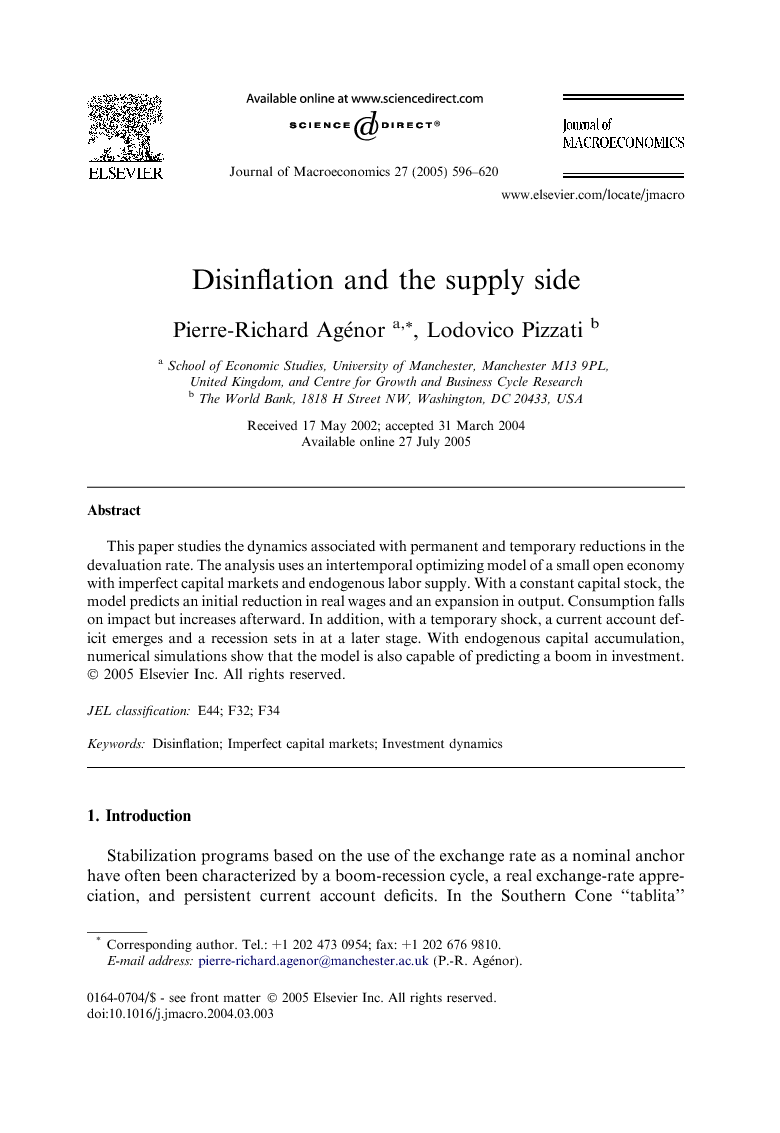 This paper studies the dynamics associated with permanent and temporary reductions in the devaluation rate. The analysis uses an intertemporal optimizing model of a small open economy with imperfect capital markets and endogenous labor supply. With a constant capital stock, the model predicts an initial reduction in real wages and an expansion in output. Consumption falls on impact but increases afterward. In addition, with a temporary shock, a current account deficit emerges and a recession sets in at a later stage. With endogenous capital accumulation, numerical simulations show that the model is also capable of predicting a boom in investment.

This paper studied the role of supply-side factors in the dynamics of output and domestic absorption in exchange-rate-based stabilization programs. First, a basic framework was presented to illustrate the main differences between this study and some of the existing analytical literature on these programs. In particular, the economy was modeled using an infinite-horizon, intertemporal optimizing framework in which labor supply is endogenous and domestic households face imperfect world capital markets. With imperfect capital mobility, equality between the rate of time preference does not need to be equal at all times to the world interest rate to ensure a stationary solution (which therefore does not depend on initial values), and a permanent reduction in the devaluation rate entails transitional dynamics. It was shown that a temporary reduction in the devaluation rate leads to a boom-recession cycle in output and consumption (in the latter case following an initial, short-lived downward movement) and a sequence of current account deficits, all in line with some of the evidence on exchange-rate-based stabilization. The basic framework was then further extended to account for capital accumulation in the presence of investment installation costs. We showed that the extended model was able to replicate a boom-recession behavior for investment and domestic absorption as well, as suggested by the evidence. This behavior emerges from both permanent and transitory shocks. The major economic variable that our analysis of exchange-rate-based stabilization fails to describe is the real exchange rate. This limitation is due, of course, to the fact that we model a one-good economy only. However, our framework can be further developed to include traded and nontraded sectors, as in some existing contributions, as well as distribution costs, which appear to be important to explain the existing evidence (see Burstein et al., 2003). With sticky prices in the nontradables sector, for instance, a reduction of the devaluation rate would directly affect prices in the traded sector only, implying that overall inflation would not fall by as much as the devaluation rate. This would lead to an appreciation of the real exchange rate, as documented in the evidence. The distinction between tradables and nontradables would provide further insight on the behavior of consumption and the current account, notably by allowing for intratemporal substitution, in addition to consumption smoothing considerations.