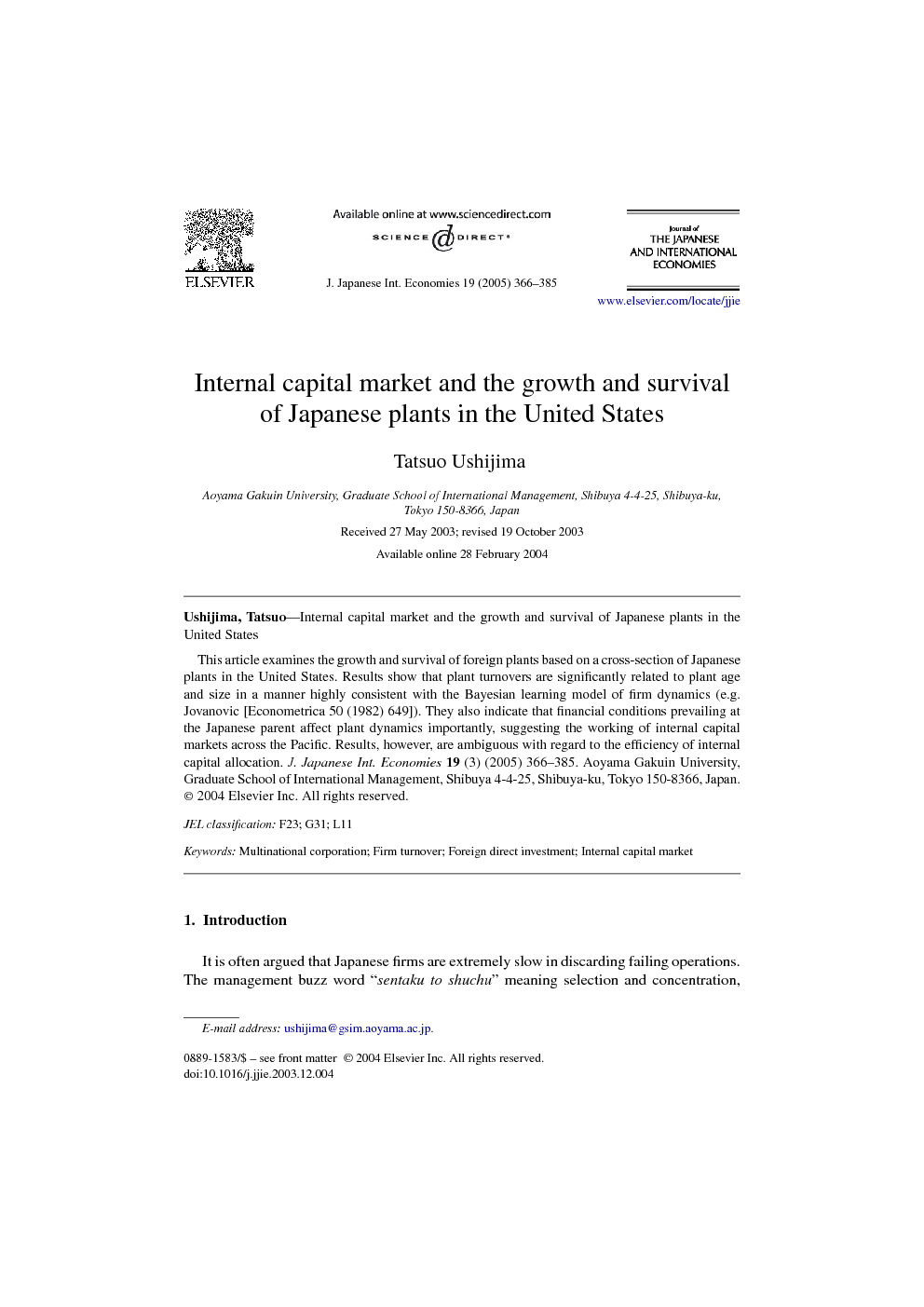 This article examines the growth and survival of foreign plants based on a cross-section of Japanese plants in the United States. Results show that plant turnovers are significantly related to plant age and size in a manner highly consistent with the Bayesian learning model of firm dynamics (e.g. Jovanovic [Econometrica 50 (1982) 649]). They also indicate that financial conditions prevailing at the Japanese parent affect plant dynamics importantly, suggesting the working of internal capital markets across the Pacific. Results, however, are ambiguous with regard to the efficiency of internal capital allocation. J. Japanese Int. Economies19 (3) (2005) 366–385.

It is often argued that Japanese firms are extremely slow in discarding failing operations. The management buzz word “sentaku to shuchu” meaning selection and concentration, which swept Japan's management community in the late 1990s in the wave of corporate restructuring, is highly suggestive of this problem. It implies that an abundance of non-performing operations, which should have been discarded earlier, is a factor contributing to the lackluster performance of many Japanese companies. However, whether slow selection is a manifestation of this alleged managerial deficiency or an outcome of rational economic processes has not been studied very carefully. Firms can be slow in selecting out operations for economically legitimate as well as illegitimate reasons. For instance, knowing an operation's long-term viability with a high degree of confidence may take time if considerable uncertainty exists with regard to external and internal conditions impacting its performance. Whether in fact Japanese firms are exceedingly inert in reaching a divestment decision, or, more generally, sub-optimally commit themselves to underperforming businesses, is an important yet undervisited question. This study contributes to filling this gap by studying the growth and exit behavior of Japanese firms in the United States. Though the problem of excessive commitment might be particularly ubiquitous in the management of Japanese firms, the growing literature on the internal capital market suggests that it is not entirely endemic to them. It suggests that the problem commonly arises when “corporate socialism” Scharfstein and Stein, 2000 and Stein, 2001 is distorting a firm's investment and divestment decisions. Firms are said to be socialistic when they are relocating capital internally to finance the growth and survival of failing operations at the cost of more successful ones. Studies, such as Lamont (1997), Lang et al. (1996), Shin and Stulz (1998), Rajan et al. (2000), show that US firms actively cross-subsidize operations in a seemingly inefficient way. Following these studies, this article investigates the growth and survival of US plants in relation to the financial condition prevailing at the Japanese parent to gain insight into the working of internal capital markets across the Pacific. An important caveat is that mere dependence of plant dynamics on parental financial conditions, though suggestive of subsidization, does not clearly point to the inefficiency implied by socialism. In fact, the internal capital market is efficiency increasing if it is used for “winner picking,” where capital is relocated for financing operations that have a solid growth prospect but will be underfunded if operated as a stand-alone unit Williamson, 1975 and Stein, 1997. Claiming inefficiency therefore demands to show otherwise: i.e. it is used more for supporting “losers” rather than prospective “winners.” An empirical challenge in this regard is to identify winning and losing plants, since current accounting practices do not require firms to disclose the performance of individual foreign operations. For this reason, in performing the task, I draw insights from models of efficient firm growth and exit pioneered by Jovanovic (1982). At the heart of these models is the assumption that firm success depends on idiosyncratic efficiency, which is ex ante uncertain. Firms grow and exit as they learn about the efficiency through post-entry operations. A key prediction from the models, which is strongly supported by empirical studies such as Evans, 1987a, Evans, 1987b, Hall, 1987 and Dunne et al., 1989, is that the turnover of small firms (plants) is more turbulent than that of large firms (plants): i.e. small firms have a higher exit rate, but, conditional on survival, grow faster. This is because small firms are highly heterogeneous in terms of efficiency. They include both future winners (efficient firms), which grow fast, and losers (inefficient firms) destined to fail, while large firms mostly consist of proven winners. In a later section, I will show that these patterns also characterize the turnover of Japanese plants operating in the United States. Also contributing to the greater turbulence of small firms is the fact that they typically face tight financial constraints, which make them vulnerable to even small shocks Carpenter and Petersen, 2002 and Cabral and Mata, 2002. When a business is a subpart of a larger organization, however, as in the case of foreign plants, the internal capital market potentially mitigates the constraint and moderates its dynamics, but differently depending on the efficiency of internal fund use. Specifically, efficient use of funds (winner picking) dictates that the growth and survival of young small plants are most heavily financed. Inefficiency (socialism), on the other hand, implies that plants having failed to grow large despite their long-time existence receive relatively greater financing because it aims to safeguard known losers from the imminent risk of failure. My empirical results reveal that internal capital markets importantly drive plant dynamics in that parental financial conditions significantly influence plant growth and survival. Specifically, ceteris paribus, plants owned by a firm whose financial condition is healthier and/or improving grow faster and are less likely to exit. This finding explains a seemingly puzzling observation that Japanese divestment in the United States increased in the late 1990s in the face of booming US economy. In that period, the financial health of Japanese firms deteriorated due to the prolonged stagnation of the domestic economy. It consumed internal funds that firms would have mobilized to support ailing US operations, leading to the wave of divestment. On the other hand, results provide no systematic evidence that firms discriminate across plants in providing supports based on future growth prospects, either in the sense of socialism or winner picking. In this sense, the internal capital markets of Japanese firms may be best characterized as egalitarian. The organization of this article is as follows. The next section reviews recent theoretical and empirical research on firm dynamics and internal capital markets to draw insights for empirical analysis. Section 3 introduces data and econometric methodology. Section 4 presents estimation results. The final section concludes.

This article highlights two important facts in the dynamics of foreign operations based on a sample of Japanese manufacturing plants in the United States. First, the growth and survival of foreign plants are closely related to plant size and age in a manner consistent with the learning model of firm dynamics. This implies that foreign market entry is an uncertain conduct whose success is hard to predict ex ante. As in the case of indigenous firms (plants), only efficient plants would thrive in the long run. However, knowing the level of efficiency unambiguously is harder for foreign plants, which operate in a distant unfamiliar environment. As such, the importance of experiential learning may be even greater in foreign operations than in domestic operations, as suggested by Blonigen and Tomlin (2001). Second, the growth and survival of foreign plants are significantly influenced by the financial condition prevailing at the parent. This suggests that they are financially constrained non-trivially, but able to seek supports from parents to mitigate the constraint through the internal capital market. The flip side is, when a plant is heavily dependent on parental supports, deterioration in the parent's financial health threatens its very existence. This explains why US divestment by Japanese firms increased dramatically in the late 1990s despite the booming US economy. This finding parallels Klein et al. (2002) that US investment by Japanese firms allied with an ailing bank significantly decreased in the early 1990s. They both suggest that the availability of internal and external funds exerts a large influence on the firm's real foreign activities. Concerning the efficiency of the internal capital market, however, results of this study are indecisive. If anything, they seem to suggest that, when providing supports, parents do not discriminate across plants based on the future growth prospect very systematically. Neither winner picking nor socialism provides a good description of the internal capital market in Japanese firms as far as the US operation is concerned. This result resembles Shin and Stulz's (1998) in that divisional investment in diversified US firms is not responsive to the growth prospects of individual divisions as reflected in industry-level Q. Based on this finding, they contend that the internal capital market of US firms is inefficient, since efficiency considerations demand firms to discriminate such that divisions with a good growth prospect receive disproportionately large funding. In this sense, though not too socialistic, Japanese firms might be also deemed inefficient in selecting out foreign operations. A quick caveat is in order, however. Whited, 2001 and Maksimovic and Phillips, 2002 suggest that industry-level Q is a poor proxy for a division's growth opportunities. They show that, when a more adequate measure is used (Maksimovic and Phillips, 2002) or the measurement error is accounted for (Whited, 2001), divisional investment patterns of US firms appear efficient. A similar criticism may apply to the present study. Even though plant age and size are important determinants of the growth and survival chance plants can, on average, expect, they are admittedly crude proxies for plant-specific factors affecting future growth and survival. More research is necessary before reaching a definitive conclusion. This and other limitations notwithstanding, this study visited an important yet under-studied question and points to interesting extensions future research might take. For instance, though this study looked at only supports going from the parent to foreign operations, the reverse flow of financial resources is of course feasible. In fact, recent anecdotal evidence on Japanese firms suggests that firms enjoying superior performances in large foreign markets, such as the United Sates, enjoy greater strategic flexibility in the domestic market. Studying the mutual dependence of domestic and foreign operations would increase our understanding of the behavior of multinational corporations and their impact on market competition. Furthermore, one can increase the scope of this study to encompass operations in multiple national markets. In a study based on a large sample of US foreign affiliates, Feinberg and Phillips (2002) suggest that there is a tradeoff in the growth of affiliates owned by the same firm yet located in different places because of the resource constraint the parent and affiliates collectively face. The international operation of Japanese firms grew substantially in the last two decades. It provides an interesting alternative avenue for studying this intriguing issue.