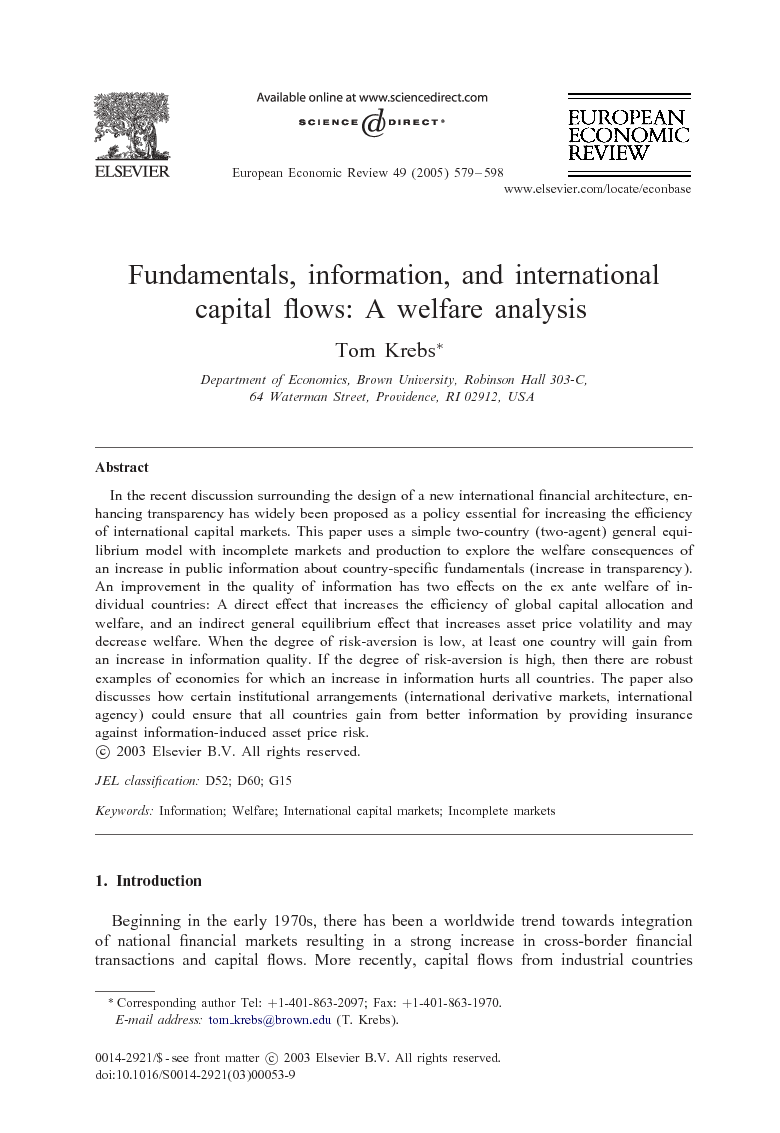 In the recent discussion surrounding the design of a new international financial architecture, enhancing transparency has widely been proposed as a policy essential for increasing the efficiency of international capital markets. This paper uses a simple two-country (two-agent) general equilibrium model with incomplete markets and production to explore the welfare consequences of an increase in public information about country-specific fundamentals (increase in transparency). An improvement in the quality of information has two effects on the ex ante welfare of individual countries: A direct effect that increases the efficiency of global capital allocation and welfare, and an indirect general equilibrium effect that increases asset price volatility and may decrease welfare. When the degree of risk-aversion is low, at least one country will gain from an increase in information quality. If the degree of risk-aversion is high, then there are robust examples of economies for which an increase in information hurts all countries. The paper also discusses how certain institutional arrangements (international derivative markets, international agency) could ensure that all countries gain from better information by providing insurance against information-induced asset price risk.

This paper used a simple neoclassical model of the world economy to discuss the welfare effect of improving transparency. The analysis showed that an increase in the quality of information can reduce the ex ante welfare of all countries because of an increase in bond price volatility. If, however, there are institutions providing insurance against information-induced bond-price risk, then enhancing transparency always makes all countries better off. Throughout this paper, the increase in information was interpreted as resulting from improvements in the collection and dissemination of macroeconomic data by governments of individual countries. Clearly, the range of applications of the formal analysis is much broader. On an international level, there are several reasons in addition to enhanced transparency why financial integration might increase the quality of publicly available information about country-specific fundamentals.18 On a national level, the amount of publicly available information about domestic financial market conditions often changes. The analysis conducted in this paper suggests that there is a general relationship between information and the volatility of asset prices which can be tested using financial market data on the national and international level. In this respect, the present theoretical analysis draws attention to a crucial distinction between conditional and unconditional variance not always sufficiently emphasized by the empirical literature: A decrease in the conditional variance of future discount factors and/or asset payoffs increases the unconditional variance of asset prices. This paper traced out the welfare consequences of an exogenous increase in the quality of publicly available information. The next step in the analysis is to endogenize the choice of information quality. For example, one could imagine that individual governments choose the quality of information strategically taking into account the general equilibrium effects of their choices, and one could ask how the process of international financial integration affects the equilibrium choice of information by governments.19 Such an extension is beyond the more narrowly defined scope of this paper, but the analysis carried out here might provide a useful starting point for future work on this issue.