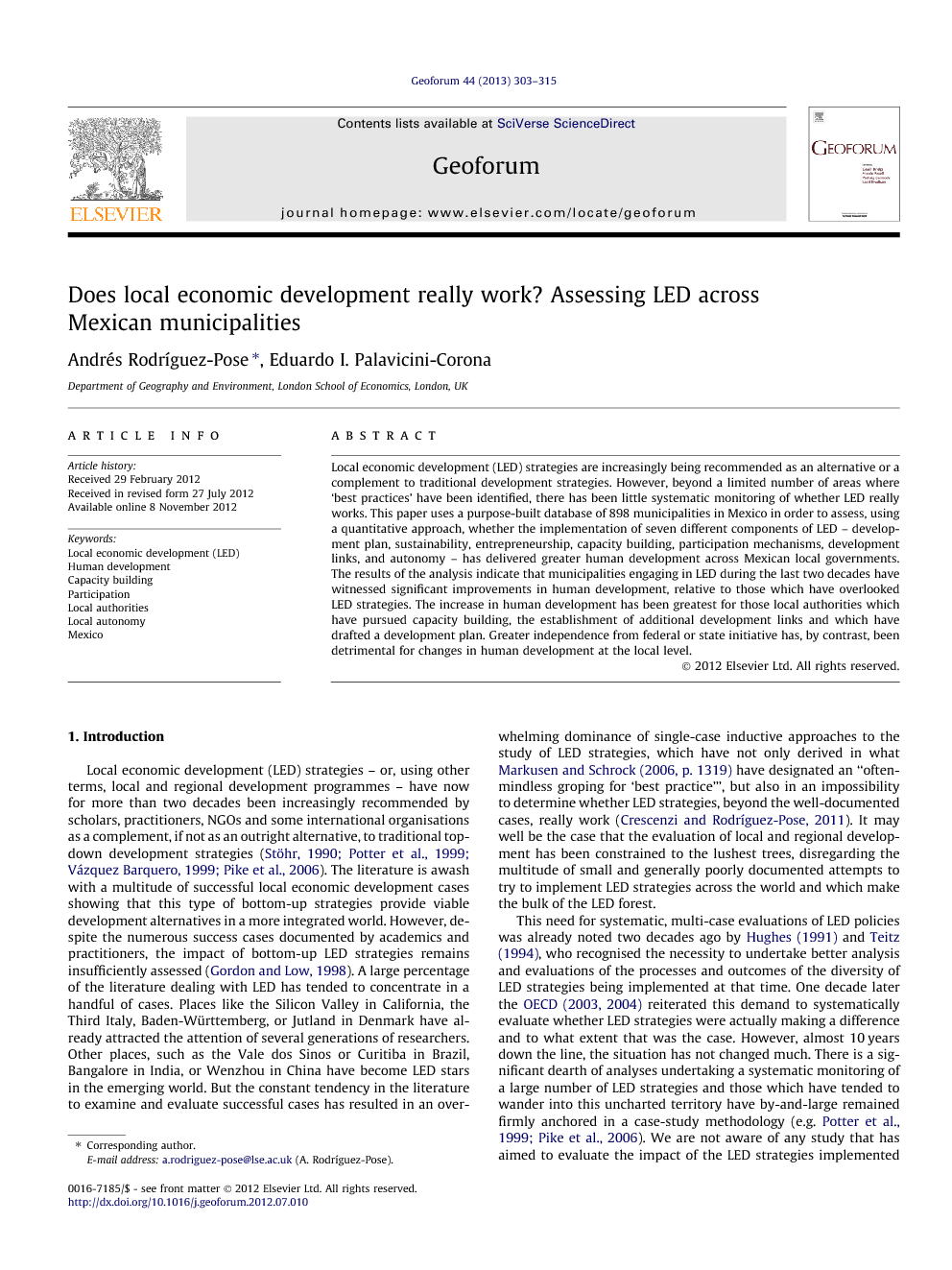 Local economic development (LED) strategies are increasingly being recommended as an alternative or a complement to traditional development strategies. However, beyond a limited number of areas where ‘best practices’ have been identified, there has been little systematic monitoring of whether LED really works. This paper uses a purpose-built database of 898 municipalities in Mexico in order to assess, using a quantitative approach, whether the implementation of seven different components of LED – development plan, sustainability, entrepreneurship, capacity building, participation mechanisms, development links, and autonomy – has delivered greater human development across Mexican local governments. The results of the analysis indicate that municipalities engaging in LED during the last two decades have witnessed significant improvements in human development, relative to those which have overlooked LED strategies. The increase in human development has been greatest for those local authorities which have pursued capacity building, the establishment of additional development links and which have drafted a development plan. Greater independence from federal or state initiative has, by contrast, been detrimental for changes in human development at the local level.

Local economic development (LED) strategies – or, using other terms, local and regional development programmes – have now for more than two decades been increasingly recommended by scholars, practitioners, NGOs and some international organisations as a complement, if not as an outright alternative, to traditional top-down development strategies (Stöhr, 1990, Potter et al., 1999, Vázquez Barquero, 1999 and Pike et al., 2006). The literature is awash with a multitude of successful local economic development cases showing that this type of bottom-up strategies provide viable development alternatives in a more integrated world. However, despite the numerous success cases documented by academics and practitioners, the impact of bottom-up LED strategies remains insufficiently assessed (Gordon and Low, 1998). A large percentage of the literature dealing with LED has tended to concentrate in a handful of cases. Places like the Silicon Valley in California, the Third Italy, Baden-Württemberg, or Jutland in Denmark have already attracted the attention of several generations of researchers. Other places, such as the Vale dos Sinos or Curitiba in Brazil, Bangalore in India, or Wenzhou in China have become LED stars in the emerging world. But the constant tendency in the literature to examine and evaluate successful cases has resulted in an overwhelming dominance of single-case inductive approaches to the study of LED strategies, which have not only derived in what Markusen and Schrock (2006, p. 1319) have designated an “often-mindless groping for ‘best practice’”, but also in an impossibility to determine whether LED strategies, beyond the well-documented cases, really work (Crescenzi and Rodríguez-Pose, 2011). It may well be the case that the evaluation of local and regional development has been constrained to the lushest trees, disregarding the multitude of small and generally poorly documented attempts to try to implement LED strategies across the world and which make the bulk of the LED forest.

The popularity of LED strategies has pushed many governments (at the national, regional, or local level) to pursue local and regional approaches to development as a panacea in order to solve their development problems. The shining examples of the LED ‘best practices’ provided a mirror into which every town, every city and every locality could look in order to become a new ‘Silicon Valley’, a new ‘Baden-Württemberg’, a new ‘Third Italy’, or a new ‘Bangalore’. But the reality has been much more muted. Despite the multitude of LED initiatives across the developed and the emerging world, there is still precious little hard evidence showing whether LED strategies really make a difference for economic development. The number of analyses monitoring the success of LED outside the ‘best practice’ cases remains rather limited and systematic quantitative analyses of how local authorities implementing LED have fared are virtually inexistent.